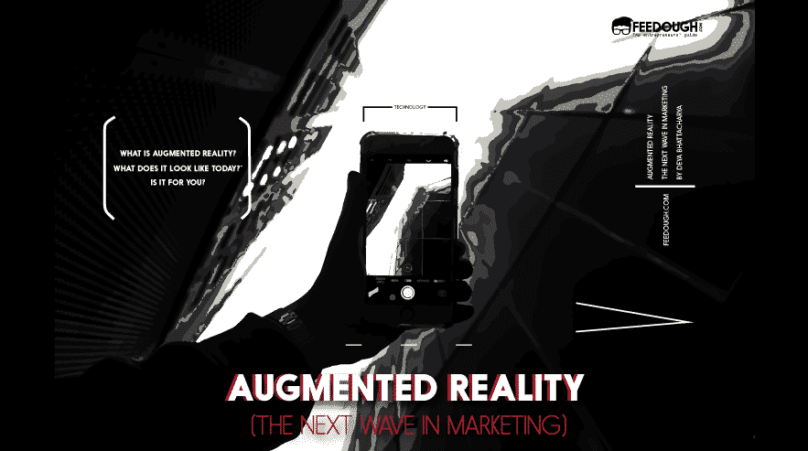 In 2014, London witnessed a zombie apocalypse.

Don’t worry, not really. But a major MNC managed to create the impression of one.

How, you’re probably wondering – short of spraying a mass hallucinogen into the air, how do you get thousands of visitors to flock to a cinema bathroom and watch themselves turn into zombies and werewolves?

Well, Pepsi did just that with their Monster Mirror campaign, using a mirror embedded with face tracking technology to let viewers see their reflection morphed into a scary face – and have something cool to talk about on social media. And it’s all thanks to a nifty technology that’s been talked about for years but is only now coming into its own as one of the biggest trends in marketing and advertising – augmented reality.

What is Augmented Reality?

Simply put, augmented reality (or AR for short) is the ability to merge digital data into a real-time experience.

Essentially, computer-generated graphics, sound and touch feedback are superimposed over a user’s view of the real world, thereby enhancing the user’s current perception of reality and assisting him or her with useful information. Two terms often confused are augmented reality and virtual reality – while the latter involves an immersion in an entirely virtual environment, augmented reality simply improves the natural world with virtual additions. A Real World 2.0, so to speak.

Now while it sounds like the latest release from the tech geeks’ lab, augmented reality has been around for a while. Ever noticed the yellow line that highlights the distance between the ball and the first-down mark in a football game? That’s one of the first uses of augmented reality – and it dates back about 20 years. Since 2010, companies have been using AR here and there, such as Volkswagen’s technical support app MARTA that shows mechanics what repairs will look like. It was questioned, though, how much practical application this exciting new technology actually had – while it’s been promising to break into the marketing mainstream for several years, it’s somehow just missed doing so, to the point where even its most ardent proponents wondered whether it would ever overcome its own hype. Now, finally, things are changing. From being written off by marketers as a gaming gimmick, AR is set to become the key with which marketers pave the way to the future.

As marketers and advertisers, we tell stories every day. And in today’s digital world, we strive to draw our readers into our stories through better and better content on a two-dimensional interface. With augmented reality, however, we are fast moving towards a world where the third dimension is at our service as well. From displaying ads at the customer’s peripheral vision to gamifying the customer experience, AR is allowing brands to finally create the authentic immersive experience that consumers have been waiting for.

Today’s customers love apps. And brands are capitalising on that to take customer interaction to the next level. For instance, furniture giant IKEA has rolled out Place, its AR-integrated app, as part of Apple’s new augmented reality developer platform – iOS users can now see how a piece of furniture looks in their homes before buying it. Lowes has implemented a dual home-improvement app solution, giving shoppers the ability to style and design their homes using virtual versions of the products and then allowing them to follow optimized, visual turn-by-turn routing on their phone screens to locate their chosen products once they reach the store. And Pepsi isn’t the only brand making good use of AR-enabled mirrors. Sephora is equipped with Modiface mirrors that allow users to virtually try on eyeshadow and other makeup products – even if they’re already wearing makeup.

Taking 360 Video Up A Notch

Whether it’s a Google Street View, a hotel room tour or a house for sale, 360 Video has become a highly popular marketing tool. Add AR to this, and you have videos that literally come to life. Amikasa’s 3D Room Designer, for instance, allows users to virtually walk through their floorplans and see if they like the concept created for them. And it’s not just buildings – Lipton Iced Tea, with their Magnificent Matcha Tea campaign, took tea drinkers inside the cup as they watched the life of a tea bag through the brewing process and culminating in the perfect cup of tea.

In the world of social media, consistent innovation is what keeps you from becoming a junk app. And Snapchat has been doing just that with its quirky filters and, more recently, its branded AR lenses that over 100 brands including BMW, Foot Locker and Hersey have used for pushing ads. Facebook is swiftly catching up with its Camera Effects Platform that allows users to digitally interact with any object in their environment. And Twitter’s new TweetReality turns your timeline into a revolving 3D half-sphere you tap to interact with.

By superimposing a virtual element over the existing environment, AR allows brands to create experiences for users. Useful applications include Sun-Seeker, a boon for photographers, architects and gardeners to know the path of the sun at any point now or in the future. The clear winner, though, is Pokemon Go. This one game, downloadable across iOS and Android and using geolocation to create different Pokemon zones, brought everyone’s childhood dream of being a Pokemon Master to life. And while its popularity has declined somewhat, it remains a fantastic example of how to engage millions around the world with a compelling story that stars you.

The Right Information, When and Where You Need It

Google Glass hasn’t done well, at least this time around. Enhanced windows and eyeglasses, however, are very much in the making. Automobile giants like Jaguar and BMW are experimenting with “smart windshields” that help eliminate blind spots and display information our eyes might miss. Facebook’s PlaceTips provides information to users based on their interactions with the physical world, and Yext serves up location-based ads across all apps so that users get to know about deals and sales only when they’re in the store.

It’s tempting to adopt a new technology simply to be cool. Especially something as compelling and popular as augmented reality, which can be used to market to pretty much anyone with a smartphone. But it’s crucial for businesses – large and small – to evaluate their needs before making the investment, which involves answering a few questions:

Every business has its own brand and message, and that’s what they should focus on when designing their next marketing programme. Technology should be the medium, not the message itself.

If you do choose to integrate AR into your marketing efforts, here are some ways you could start:

As Apple’s chief executive, Tim Cook, recently said: “AR will be as important as eating three meals a day.” Facebook has unveiled plans for users to be able to digitally create a 3D object, share it on Facebook and insert it into their world via augmented reality – and have most recently experimented with selfie commerce by sharing augmented reality ads. Universal has announced the release of its app “Jurassic World Alive” where players capture dinosaurs using augmented reality, and a recent Netimperative poll of 100 marketing managers in the UK shows that 72% plan to use it in some capacity by 2018.  There’s no denying that AR is here to stay, and – like digital – is well on its way to ubiquity.

We’re not quite there yet, though. While going digital is now as simple as signing up on Instagram, AR requires a degree of monetary investment and technological skill that not every organisation can afford to have. Moreover, the likelihood of a tool to be adopted depends heavily on its availability, and AR platforms still aren’t compatible with every smart device. And while it has tremendous scope for application in industries like retail, travel and entertainment, there is less clarity on how well AR can be applied to other industries like banking, finance, B2B or insurance. Innovations are happening every day, however, and a decade from now we could well live in a world where 3D is the new unimaginable. And given that the current projections for mobile AR alone stand at $108 billion by 2021, it could well happen sooner than that.

Are you a marketer? Come on! Tell us what you think about our article on Augmented Reality in marketing in the comments section.

Augmented Reality – The Next Wave In Marketing