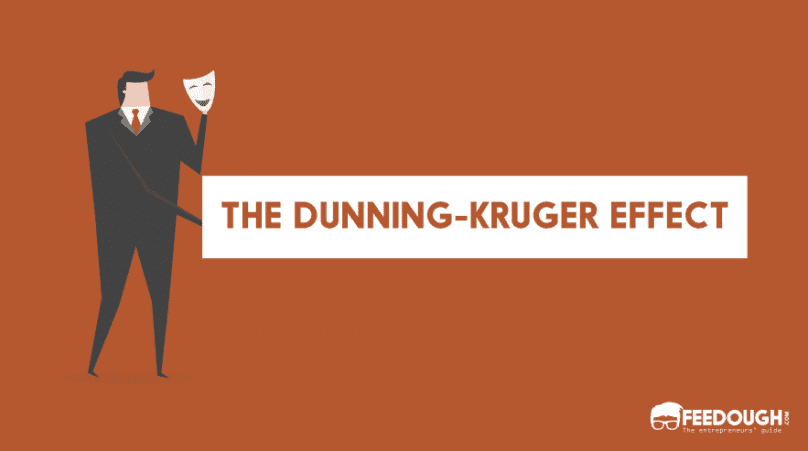 You have stumbled upon a person beginning a topic and discussing at length with the claim of his versions, facts and opinion being the correct one and everyone else’s stupid, uninformed, and just plain wrong?

To everyone else, it is evident that this person does not have an iota of an idea of a lack of knowledge about the topic he/she is proudly speaking.

Well, you have just witnessed The Dunning-Kruger effect in action.

You might be asking yourself what Dunning-Kruger effect is? What is the scientific reasoning behind this kind of behaviour? How does this affect your financial situation and economic landscape? How does the Dunning Kruger affect business and startups?

Read on to find out.

Contents show
1 What Is Dunning-Kruger Effect?
1.1 What Explains This Psychological Effect?
1.2 How Does It Influence The Economic And Financial Domain?
2 How Is The Dunning Kruger Effect Harmful For Business?
3 Bottom-Line?

What Is Dunning-Kruger Effect?

Dunning-Kruger effect is a cognitive bias in which people have an illusory superiority and assess their cognitive ability as greater than it actually is.

Simply put, it refers to cognitive bias where people believe that they are smarter and more capable than they really are. They overestimate their skills and they like this illusion.

What Explains This Psychological Effect?

As humans, we fail to see the flaws in our thinking or the answer.

We think we are the best at what we are doing which in reality could be the worst possible route of the solving the problem at hand.

This illusory superiority comes to realise the lack of ability gives rise to a “dual burden.”

We fail to see the flaws and due to which we aren’t able to act on it as well.

This psychological effect is more common than someone might think. Overlooked easily but this effect has severe implications if unchecked.

How Does It Influence The Economic And Financial Domain?

Humans have developed a sense of social justice continuously. From the Paleolithic Age when we relied exclusively on hunting and gathering, the most pressing concern has been about how the distribution happens. We can understand, then, why most people would gravitate towards the basic principle of an authority taking care of redistribution.

That’s Marxism in a nutshell, which requires the market to function as a zero-sum game.

If we apply this principle to the modern economy, the consequences develop all around us. The disincentive on production caused by forced redistribution prevents wealth from being created throughout the globe.

Simply put, people do not have any incentive to produce more/perform because they would not reap better benefits.

Although most people, as we’d expect, are unaware of this crucial problem or grossly underestimate it.

Based on the report by the Federal Research Division, Library of Congress, about 70% of respondents believed they had a “high” level of financial literacy. Meanwhile, 70% of them couldn’t pass a basic financial exam and only  1% of the respondents earned a grade of A (over 90% correct).

We could therefore easily see how technical ineptness leads to inflated assessment which could prove fatal.

How Is The Dunning Kruger Effect Harmful For Business?

When launching a startup, a person is confident enough of the product-market fit, positioning, branding etc. but a significant area for concern should be overconfidence.

People are blinded by their illusions and deny reality. They are so obsessed with their idea that they refuse to see it through the eyes of someone else.

Constructive criticism and feedback are essential for a venture to grow and assess it’s shortcomings promptly.

A competitor with a quick and clear mind may grab the idea and make it successful and gather more interest from investors and then improve the product using the investments. Just like what Google did to Yahoo!

The Dunning Kruger effect could be seen in the hiring process as well.

You may have hired the best talent you could have found at a particular stage, but it is important to note that nobody is ever the perfect candidate for the task forever.

The utopian vision of thinking one’s employee being the best in the block is shattered when you bring someone from established companies say Google, Facebook, Amazon, etc.

They may reveal the loopholes and give you some idea about the area to improve and truly become the best in the block.

“Hiring makes or breaks a company.”

Even after hiring it is essential to train your employees and keeping them updated with the current industry standards.

Imagine having a programmer at a venture who according to your manager, at best, is a mediocre performer.

But what is worse than this?

If your employee stops hearing his manager’s opinion and still consider himself/herself the best person for the job. This is eventually a spiralling down path which does more harm than good for you as an employer.

Even team cooperation takes a hit when people fail to recognise the genuine skill and expertise of other people.

The best way to overcome the Dunning Kruger effect is retrospection.

At every step, we should compare ourselves with others who are pursuing the same field and measure their success with yours and make an informed decision and change course when there is still time left.

Did we miss something?  Come on! Tell us what you think about our article on Dunning-Kruger Effect in the comments section.