Virtual Reality in Marketing: Fad or the Future?

Its earliest origins go back to nineteenth-century murals. It’s been the hero of Hollywood movies since The Matrix and the saviour of gamers since Battlezone. It’s a part, in some way or the other, of 75% of today’s biggest brands. And it’s wildly, undeniably cool. Allow me to introduce the hero of today’s article and, perhaps, tomorrow’s day-to-day – virtual reality.

What Is Virtual Reality?

Simply put, virtual reality (or VR, for short) refers to an artificial, computer-generated environment that uses high-end graphics, as well as audio and aural sensations, to create a three-dimensional world that users can feel like they are interacting with. Most VR experiences are generated through the use of specialized headsets and other equipment to aid touch and other senses.

VR is often spoken of interchangeably with its more mainstream cousin, augmented reality (AR). While they both involve a mix of the real world with virtual elements, we can break down the difference between them as follows:

What’s In It For Marketers?

The term ‘virtual reality’ itself wasn’t popularized until 1987, by Jaron Lanier of the Visual Programming Lab (VPL). People, however, have been experimenting off and on with the technology since the early 20th century. In 1929 Edward Link created “Link Training”, the first commercial flight simulator, an entirely electromechanical contraption. Morton Heilig was responsible for two major breakthroughs – the Sensorama in the 1950s, a stereo cabinet that placed the viewer “inside” a movie by stimulating all the senses; and the Telesphere Mask in 1960, the first head-mounted display. It was only after the mid ’90s, though, that virtual reality captured the sustained interest of the masses and the focus of the scientific community, thereby paving the way for increasingly improved and popular innovations that have currently reached their commercial peak in the form of Google Cardboard and Oculus Rift, the most commonly used VR devices. It has found multiple industry applications as well, from employee training by Walmart and improving leg function for paraplegics to a game that calms anxiety patients and good old virtual conference rooms.

So how does it add value to marketing?

Today’s buyers don’t want to be preached to. They want to be drawn in. They want to experience products and ideas first-hand and be convinced – beyond doubt – that they’re buying what’s right for them. And virtual reality is doing just that. By offering an interactive experience that allows consumers to get up close and personal with what previously existed on a 2D screen, it makes all the steps we target in the buyer’s journey – buyer awareness, purchasing process and personalised choices – far more persuasive.  Result? More sales and happier customers.

But it’s not merely a revenue booster. Virtual reality, if used strategically, can completely alter consumer perception about a brand – for the better. This happens because with VR consumers can completely reframe their experience with a product – in terms of how they begin their interaction with it – while getting closer to what it has to offer. They see aspects of an offering they never imagined before, feel emotions they would never have associated with it – they become, so to speak, a part of the offering. Done correctly, this can change the way brands and consumers across the industry converse with one another. And it’s already working wonders for several brands, some of whose stories are highlighted below:

This daily has been a favourite of the intelligentsia since 1851. Like most newspapers, though, it’s struggled to keep up with the digital era. A few years ago, therefore, it decided to make storytelling an experience on its own. In a much-publicised collaboration with Google, they distributed a million Google Cardboard viewers to all of its Sunday paper subscribers as part of its brand-new virtual reality campaign, in which NYT readers could watch specially-crafted films designed to appeal to the intellectual audience who made up much of their subscription list. Seeking Pluto’s Frigid Heart, for instan ce, brought space enthusiasts up close and personal with the erstwhile ninth planet, and The Displaced immersed viewers into refugee camps and abandoned villages around the world and brought home the fear that children displaced by war and conflict felt. It showed them what despair looked like – and it worked. The Displaced helped jump circulation among younger readers, bagged the Entertainment Grand Prix at the 2016 Cannes Lions Festival and reminded the world that NYT is and always would be one of the best content creators around.

Home improvement giant Lowe’s has taken try-before-you-buy to the next level with its recently launched VR marketing strategy. In conjunction with Microsoft they released the “Holoroom” – separate areas in a Lowe’s store where customers can use Google Cardboard and Oculus Rift headgear to see what a remodeling project would look like set in their own home. Not only that – while Holorooms are available at 19 stores across the US, Lowe’s also offers online customers the option of using Google Cardboard to experience the same VR while at home. It’s a superb way of allowing customers to make more targeted decisions by visualising the final project before the investment is made. And it makes for some solid business growth.

Since it burst onto the scene in 2006, Tom’s has branded itself as a footwear company that’s all about giving and helping out. In fact, for every pair of shoes bought, it donates a pair to someone who needs it. Customers certainly liked knowing that they were helping the less fortunate – but as they say, seeing is believing. Which is why Tom’s created a special VR enabled area at its flagship storein Venice, California, where customers could put on a headset and immediately be whisked away to a small village in Peru where people were actually wearing the free shoes Tom’s gave away.

How do you test drive a car without a car showroom? Virtually test it. Volvo came up with Volvo Reality to promote their XC90 model and continue to release updated versions of this easily downloadable app. Users can test all the features, including safety-related features like automatic braking for collision avoidance – something impossible to replicate in an actual test drive. In its newest iteration, the app offers a “weekend escape” version that allows users to take their Volvo on a 360-degree mountain ride. Best of all? It works with or without Google Cardboard – which makes this move not only brilliant but also accessible.

When one thinks of Merrell, one normally associates them with sturdy waterproof boots ideal for outdoor use. But the renowned footwear label decided to change that up with the launch of their most innovative hiking shoe via TrailScape, a 4-D multisensory hiking experience. This was the first use by a company of a technology called Oculus Rift, which involves tactile elements of walking on different surfaces and even included obstacles such as rockslides to navigate around. Buying Merrell now meant going on the adventure of a lifetime. This 4D film premiered at the Sundance festival and made the simple act of buying hiking shoes an adventure of its own. The North Face did something similar by offering viewers the opportunity to hike through Yosemite National Park as well as Nepal. People could actually feel what it was like to explore the world in Merrell shoes – and thus be all the more motivated to buy them.

By now, digital is workaday. If companies haven’t adopted it, they’re about to. The vast variety of free and inexpensive digital options out there means that everyone, pretty much, can have a strong presence online. When it comes to going 3D, however, many marketers balk. And this is for two main reasons.

First, based on the current state of technology, brands are almost always likelier to choose AR over VR if they decide to incorporate 3D elements. Augmented reality has already established itself as the new favourite tool of marketers – it’s interactive, enjoyable and increasingly easy to use as AR tools become ubiquitous across smartphones, and hence provides an engaging way for marketers to reach their target audience while standing out from the crowd. VR, on the other hand, regardless of industry or product, requires a head-mounted display – a large, bulky piece of equipment – which makes it much harder to reach potential customers without hardware that is as accessible as VR software. In addition, there are the inherent problems with the VR devices themselves. By and large, they are simply too expensive for the mainstream – who are mostly not receptive yet to the idea of carrying an extra device around. Many first-time VR users report motion sickness and disorientation, which could be off-putting for potential customers – long-term use of head-mounted displays could also damage the eyes and strain the head and neck. And many are simply intimidated by what they view as an ‘ungraspable’ technology, while others dismiss it as ‘for gamers only’.

There’s been some headway in solving this, though. Fast food mogul McDonald’s has managed to reshape virtual reality into a cool made-for-kids version by releasing a Happy Meal Box that easily folds into a VR headset, complete with instructions on how to build it at home. It’s simple and fun to buil, and offers the excitement of VR without the cost and inconvenience. This could well be a first step towards taking the technology from the somewhat formidable concept it is viewed as by many to an easy, affordable tool.

At Social Media Week 2017, Executive Creative Director Henry Cowling of UNIT9 summed up the future of Virtual Reality in marketing: “The first step is finding out how VR fits into your marketing strategy, the second is convincing your audience to put a headset on.” One possible way to bring headsets into the mainstream could be by bundling them with smartphones and thus capitalizing on the ubiquity of the latter, like Lenovo did with its K4 Note. This would call for increased research on how to make all smartphones VR-enabled and how to keep the cost of the bundle relatively low. The VR devices themselves could take a cue from McDonald’s and be designed along inexpensive, DIY lines.

Both VR and AR will continue to be focal areas for business. By 2020, the economic impact of virtual and augmented reality is predicted to hit $29.5 billion – and with ever more innovative applications being found for them, such as the upcoming VR and AR-based Nickelodeon sitcom, the actual figure could well be higher. To truly live up to its promises and become an effective marketing tool, though, virtual reality needs to demonstrate that it can be used – easily, cheaply and viably – in daily applications beyond gaming and entertainment, which is what most of its current proponents use it for. And given that only about one per cent of the number of computers in the world is compatible with VR, there’s a long way to go before the technology becomes even close to mainstream.
So. Is virtual reality potentially a game-changer for marketers? Absolutely. Will it really do so? The jury is still out.

Did we miss something? Come on! Tell us what you think about our article on Virtual Reality in the comments section.

We are sorry that this post was not useful for you!

Thanks for your feedback! 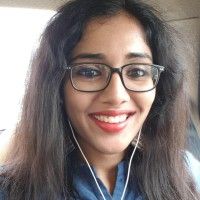 Deya Bhattacharya
I'm always up for a party. In a library. With unlimited brewed coffee. And Chopin on the playlist.

Send this to a friend

Throughout the short history of cryptocurrency, we've been introduced to numerous new processes and terms like decentralization, coins, tokens, altcoins,...