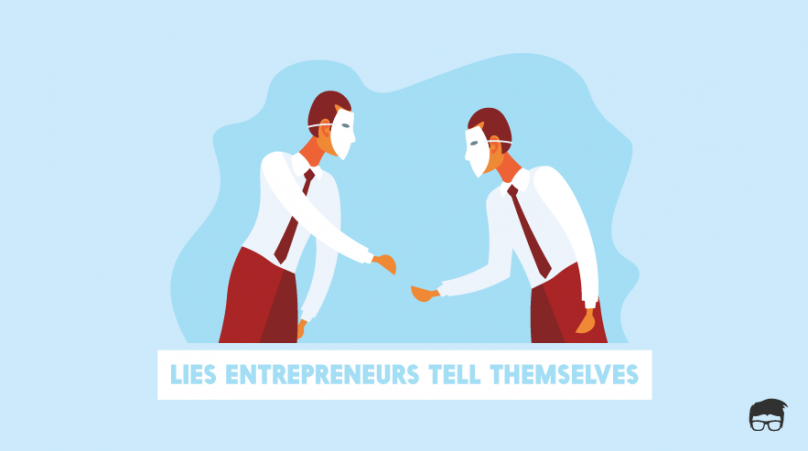 “You have no idea how many lies I had to build around to attain this position!”

Almost all of us have come across such statements at some point in our life. Whether it’s a successful entrepreneur cousin or a movie glorifying the magnitude of lying, these dialogues create an impact over their audience.

There is a significant proportion of startup owners who gradually develop this habit. In business, an individual sometimes can be left with no choice but to lie and given the circumstances, one might even be able to justify their behaviour. However, owners fabricate their brains to accept these lies. Let us dig deep into these entrepreneur lies and how they impact a business.

Contents show
1 Why Do Startup Owners Lie To Themselves?
1.1 Self-Gratification
1.2 Self-Assurance
1.3 Self-Confidence
2 The Big 5 Lies Entrepreneurs Tell Themselves
2.1 Customers are amateurs
2.2 The more time I dedicate, the higher are the chances of success
2.3 I don’t need partners, I am a one-man army
2.4 Money is the ultimate answer to all problems
2.5 I don’t think I need to work harder after achieving ‘that’
3 Are These Lies Deliberate Or Accidental?

Why Do Startup Owners Lie To Themselves?

Psychologists have been trying to decode the reasons or situations which cause a startup owner to lie to himself/herself.

Before you move forward to go through these reasons, it is quite dismal to observe that most of these reasons are born out of low esteem. For our understanding, let us denote these reasons as the three ‘S’ which cause a startup owner to lie to himself.

Self-gratification usually reflects the pleasure arising out of a desire being completed. In business, owners are always in search of higher profits and constant growth.

However, startup owners often lack the patience to reach this pinnacle. They want to witness the victory adrenaline rush which often becomes a want and a lie becomes inevitable. Constant lying to oneself gives these startup owners a sense of pleasure, often misleading them from their path.

Self-assurance as a reason for resorting to lying can have both negative and possible implications, depending upon the individual’s status of mind. Assuring oneself about a future event by constant lying might be helpful if the lie thus said to oneself focuses on the uncertainty of the event.

However, if a similar event is self-assured by lying to oneself about the zero probability of its occurrence, then one is probably putting themselves in a dangerous corner.

Startup owners are constantly looking for ways to elevate their confidence. This need is born out of the intense pressure to sound confident in front of various stakeholders of the business.

Using a lie to elevate their confidence might work in the short term, however, the strategy might backfire as it might further show the owner as an overconfident person.

The Big 5 Lies Entrepreneurs Tell Themselves

This is one of those lies that has a 100% probability of negatively impacting your business. Customers are the crux matter of any business idea and whether it is a SAAS based startup or one based on marketing, considering the customers as amateurs can be seriously devastating.

Even if your targeted audience is not well educated or has zero understanding of your business, it is important to note that your audience crowd also includes your competitors. These competitors might use such information against you.

The more time I dedicate, the higher are the chances of success

Startup owners often have this false notion regarding the direct relationship between time and success. Owners can spend their 24 hours being involved with the business and remain at the same spot on the success scale.

It is important to understand that it is not about the quantity of work but rather the quality of work performed in those hours that makes the difference.

I don’t need partners, I am a one-man army

Contrary to cinematic dialogues, the startup business requires a thriving workforce. Hence, it is important to acknowledge the needs of the business and look out for a potential partner if the business demands so.

Lying about one’s potential can have a severe impact on the startup business.

Money is the ultimate answer to all problems

Your personal problems might have one straight answer, i.e. Money or financial stability. However, the same can not be true for a startup. There needs to be a proper balance between cash inflows and skill enhancement.

In fact, after reaching the saturation point of generating money, owners often resort to options such as loans.

From formal sources initially, the hands somehow turn towards informal sources, leading the business into the treacherous debt trap.

Startup owners have this desire for reaching a certain target. Often, this target is set at a high scale and owners are ready to take a break once they can achieve it.

It is important to understand that such lies deflect the owner from focusing on the status of competition in the market. Concentrating on a certain target often blinds them to an extent whereby the presence of any competitor is either ignored or its capacity to thrive is incorrectly measured.

Are These Lies Deliberate Or Accidental?

The answer to this question is “IT DOES NOT MATTER.” Any lie to oneself regarding a business established by you is only going to put both in a dark world.

What stands to be important is to identify how, when and why you tend to lie. Steps must be taken to avoid such practise. Hiring a professional business advisor can also be a significant step in countering this behaviour.

Did we miss something?  Come on! Tell us what you think about our article on entrepreneur lies in the comments section.

A startup analyst who believes that every big project is the result of numerous small efforts that go into the way. Giving anything below 100% is a huge setback to my natural capabilities.