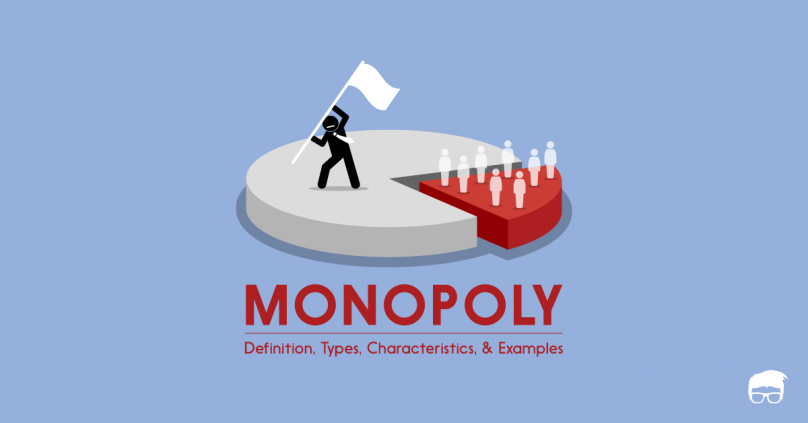 But what exactly is a monopoly and how does it work?

Contents show
1 What is a monopoly?
2 Characteristics of a monopoly
3 Types of monopoly
4 Monopoly Examples
5 Barriers to Entry: How a Monopoly Maintains its Power
5.1 Economies Of Scale
5.2 Strategic Pricing
5.3 Ownership Of Essential And Scarce Resources
5.4 High Sunk costs
5.5 Contracts
5.6 Consumer Brand Loyalty
6 Advantages Of Monopoly
7 Disadvantages Of Monopoly

What is a monopoly?

A monopoly is a market structure that consists of a single seller who has exclusive control over a commodity or service.

The word mono means single or one and the prefix polein finds its roots in Greek, meaning “to sell”. Hence, the word monopoly literally translates to single seller.

To understand the concept better, let’s break the definition into three key-phrases –

Characteristics of a monopoly

Some examples of monopolies which have great historical significance are listed below:

Barriers to Entry: How a Monopoly Maintains its Power

Several factors and strategies allow a monopoly to maintain the power that it holds in an industry. These essentially pose as barriers to entry to potential entrants. Some of these are:

When it is said that the production of a certain commodity has become efficient, it means that the firm does not have to spend large amounts on the cost of production. After existing in the market for a considerable period of time, output can be generated at a larger scale with fewer input cost. This is known as economies of scale.

Strategic Pricing allows a monopolist to charge any price for their offerings. The price may be set to be extremely low – predatory pricing – in order to prevent any firm from entering the market. This is often done by a monopolist to demonstrate power and pressurise potential and existing rivals.

Ownership Of Essential And Scarce Resources

Monopolies that first enter a market have access to resources that it may choose to keep for itself. Due to this, these scarce but essential resources are made unavailable to the potential entrants.

This is often the case with natural monopolies.

Sunk costs are those which cannot be retrieved in the case a firm shuts down. These are costs that are essential for the firm, like advertising costs, but cannot be recovered.

With the existence of a large monopoly, the risk of a potential entrant going out of businesses always looms. Hence, these potential entrants hesitate when it comes to taking a risk that could cost them too much. This consequently poses as a barrier to entry.

Monopolies maintain their power by creating contracts with suppliers and retailers.

Consumers often develop trust and loyalty with firms that offer them quality products and services. A sense of familiarity that generates consequently deters them from going elsewhere to satisfy their demand. This does not allow other entrants a chance. Hence, they find it difficult to capture market share for the product and service that they offer.

A great example of a company using this technique to develop a monopoly is Google.

Monopolies are advantageous to economies in some ways. Some of these reasons are listed below: