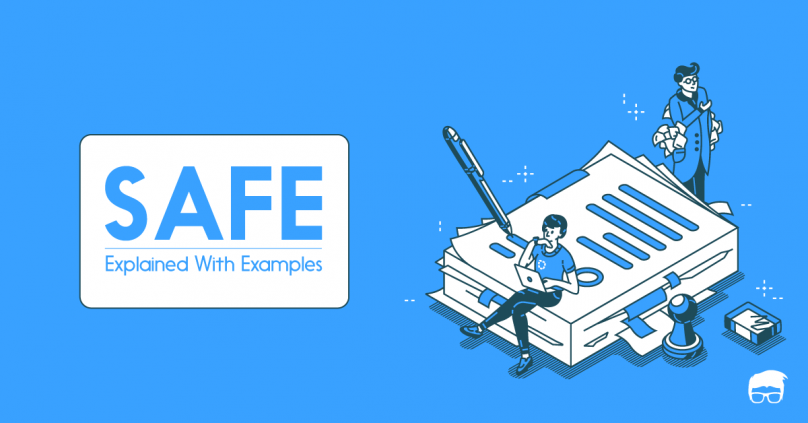 Startup funding during the initial stages of the startup is crucial for the company’s survival in the long run. However, in most cases, startups during such early stages don’t generate revenue and often operate in a very risky business environment. This makes it hard for the investors to value such startups at the time of the investment.

But this doesn’t stop them from investing in potentially profitable startups. They invest using the concept of future equity – the investment amount converts into equity not immediately but upon the occurrence of future events or fulfilment of future conditions.

This is where Simple Agreement For Future Equity (SAFE) kicks in.

What is Simple Agreement for Future Equity?

Simple Agreement for Future Equity (SAFE) is an investment contract used to invest in early-stage startups in return for the rights to subscribe for new shares in future, usually at the next preferred stock financing round or a liquidation event.

To understand the concept better, let’s break the definition into three key-phrases –

Y Combinator introduced this concept of SAFE as an alternative to convertible note that acted as a debt to the startups who were required to pay interest on it.

SAFE is a distinct future-equity agreement with the following characteristics –

SAFE is issued to the investor by the startup company. The founder is never required to pay back the money raised out of his personal assets.

Suppose Mr X invested $50,000 in a startup through a SAFE. In two years, the startup went for another fundraising round from an angel investor who agreed to buy 10% of the company for $2M. The post-money valuation of the company comes out to be 20M.

Supposing the startup had 18,000,000 shares before the angel investor’s investment, the price per share comes out to be $1.

Supposing, the SAFE didn’t have any special terms in it, Mr X gets 50,000 shares of the startup he invested in.

However, SAFE usually comes with specific terms to give preference and benefits to such early investors.

There’s more to just the simple definition of SAFE. Even though it’s not a loan like a convertible note, it does come with certain terms and key parameters that are similar to it.

It’s the maximum valuation at which SAFE can convert into equity. This is a way for the SAFE investor to get a better price per share than the investors who invest later.

By using a valuation cap, the investor fixes the maximum valuation at which SAFE can convert into equity. That is, if the cap is 5M and the company ends up raising money at a valuation of 10M, the investor is entitled to convert his SAFE at a share price equivalent to 5M.

Example: SAFE with a valuation cap but no discount

Let’ assume that startup XYZ raised its seed funding of $50,000 from an Angel investor, Mr A, by writing a SAFE with a $5M valuation cap and no discount.

Sometimes, SAFE comes with a discount to woo early investors. SAFE discount is the valuation discount the investors offering a SAFE receive relative to the investors in the subsequent financing round. Such discounts typically range from 10–30%.

Example: SAFE with a valuation cap but no discount

Let’s assume that a startup XYZ raised its seed funding of $60,000 from an Angel investor, Mr B, by issuing a SAFE with a 40% discount.

Next year, the startup went on to raise its next investment at a pre-money valuation of $10M at a price of $10 per share.

Example: SAFE with both valuation cap and discount

In cases when both the valuation cap and the discount clause is included in SAFE, the investor weighs both the options at the time of valuation and converts his SAFE at the lowest possible rate.

If at the next funding round, the company is valued at $10M at a price of $10 per share, the 40% discount will convert Mr C’s investment at $6 per share.

The valuation cap, however, would result in $5 per share [5M/10M*10], which would be the actual price at which Mr C’s SAFE would convert to shares.

In some cases, a startup takes funding from more than one investors before actually going for a preferred equity funding round. To do this, it may also write two different SAFE to different investors. Now, a most favoured nation clause, or an MFN clause, keeps the later investors from getting better terms than the previous investors.

Now, the MFN clause allows investor A to elect to inherit any more favourable terms that are offered to investor B or any subsequent investors prior to the next equity round.

Pro-rata right gives an additional right to the SAFE investor to participate in the subsequent funding round to maintain his/her ownership percentage in the company.

Suppose an investor bought 10% of a company in return for SAFE. In the subsequent round, if his/her share value dilutes because of the influx of new investment, (s)he can invest the amount required to regain his ownership percentage.

While SAFE has reasonable benefits for entrepreneurs, many investors still focus on signing an IOU in the form of convertible notes.

In essence, SAFE notes mean less risk for the founder and more risk for the investor, and it’s the total opposite when it comes to the convertible notes.

Did we miss something? Come on! Tell us what you think about our article on simple agreement for future equity (SAFE) in the comments section.

What Is Simple Agreement for Future Equity (SAFE)?