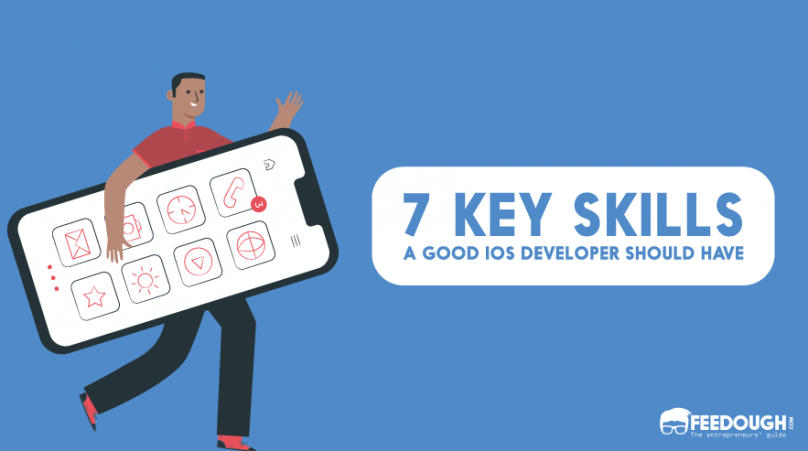 The process of choosing the right career path for yourself can be a little tricky, especially in the tech domain. Currently, the mobile app industry is booming and looking at the current scenario it seems like the scope is likely to expand in the next few years. This means there are a number of learning opportunities for career growth.

In this article, we will specifically focus on building your career as a top-notch iOS app developer and what are the major skills that are required to help you in starting your journey in one of the leading iOS app development companies in the industry.

Below is a list of iOS developer skills that you should definitely hold expertise in, which are as follows:

This is because Swift is a universal language owned by the tech giant Apple and all the iOS applications are built on it. Some of the functionalities offered by Swift language are Control Flow, Error Handling, Classes, Inheritance & Initialization.

When it comes to designing and developing an iOS mobile app, spatial reasoning plays an important role. In simple words, it is mainly about thinking from the user’s perspective i.e. the interaction with the mobile app, the overall experience of using the app, etc.

Here, iOS app developers need to have that out-of-the-box thinking and find innovative as well as effective ways in which they can make the app more efficient while enhancing the user experience. By thinking from the user’s point of view, an app developer can design a user interface that is simple to navigate and includes features and other functionalities in a more accessible way.

App users prefer those applications that are simultaneous in nature and can handle various tasks simultaneously such as displaying information, understanding the inputs added by a user, collection data from the internet and so much more.

If you do not have a thorough understanding of Apple’s Xcode IDE, you cannot think of becoming a top-notch iOS app developer. The Xcode IDE is the actual reason that makes an iOS app work smoothly while offering an amazing user experience. Throughout the journey of conceptualizing an idea for the coding part of the app development process, app developers need to master the Xcode IDE.

The Xcode IDE is highly integrated with frameworks like Cocoa and Cocoa Touch since it is also a primary environment for creating mobile applications for Apple devices like iPhone, iPad, Apple Watch and many more.

Networking is one of the iOS app development skills that many mobile app developers don’t pay attention to and treat it as an optional application development skill. Think of it like this, if your iOS app can’t interact with the web, what use would it be of and the majority of its features won’t work?

Nowadays, almost every mobile application needs to interact with the web in one way or another and this is what marks the importance of networking. This is generally carried out with JSON which stands for JavaScript Object Notion. That’s why even app development companies pay high attention to the networking aspect of the application.

As an app developer, you might be aware that both UI (User Interface) and UX (User Experience) are related to the design of a mobile or web application but when it comes to the functionalities, there are some differences in both terms. Basically, the User Interface (UI) is based on the looks of an app whereas the User Experience (UX) depends on how exactly the end-user is using the app.

Here are some of the key things that you need to keep an eye on while following the design guidelines:

Apart from the above-mentioned points, using notifications is another great way of passing information from one location to another location, for example, the app notifications allow app developers to send data to multiple app users at the same time.

Talking about rules and guidelines, Apple follows a very strict policy for them. As an iOS mobile app developer, you should be familiar with all the Apple Human Interface Guidelines as following these guidelines will assist you in creating a simple and smooth app experience for the end-users

These Human Interface guidelines by Apple also help iOS app developers to include more creative practices that can result in maximum impact on the app user and deliver superior visuals without any issues.

Last but not least, you can also add learning about core data to your skillset. This is because it can be quite disappointing for a user when minor issues like data loss, interface glitches, and other bugs are faced again and again. With core data, all of these issues can be easily eliminated.

Did we miss something? Come on! Tell us what you think about our article on iOS app developer skills in the comments section.

A digital marketing executive at MobileAppDaily. I have 2 years of experience in this field. Apart from that, I love to write on technical topics.

7 Key Skills A Good iOS Developer Should Have