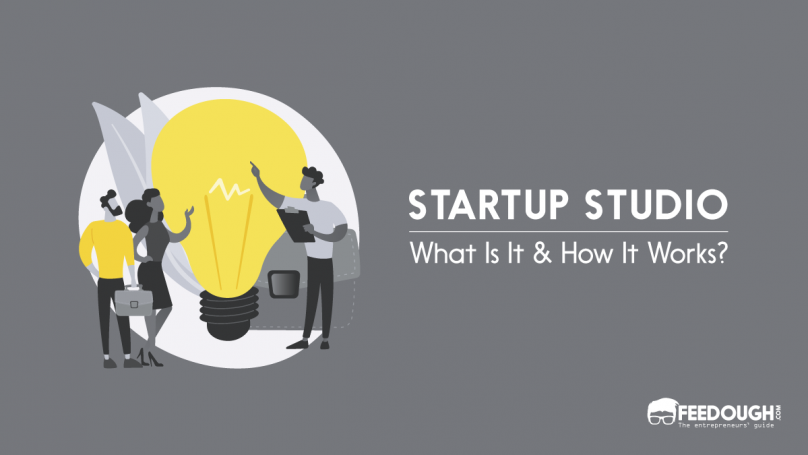 The startup ecosystem is booming like never before. There’s disruption and behavioural alteration in almost every industry that you can think of.

But then, there are failures too.

However, entrepreneurs are not alone. They have enough experienced people ready to work with them, help build their startups, and reduce the chances of failures. While a majority of new founders approach accelerators and incubators, you don’t always need cohort-based entities to help you in your initial startup stages. Some businesses will partner and work with you as you need.

So, let’s decode startup studios for you.

What is a Startup Studio?

In other words, a startup studio is a startup that creates startups. It is an organisation of experienced founders, investors, and experts that either develops its ideas or partners with entrepreneurs if they have a disruptive business idea. It then utilises its pooled money, expertise, and other resources like financial capital, team, strategical plans, management processes, and technical tools to help you establish the business.

You must remember that it does not work on a cohort basis like accelerators and incubators; it will partner with you just like an investing cofounder, that is, it will work with a hands-on style and expect equity in return.

However, you might not be the only founder it is working with. The startup studio might be developing several ideas and businesses simultaneously, a style of building businesses called parallel entrepreneurship. Here, yours and the other businesses are known as subsidiaries of the studio, while the studio itself is known as a holding company.

Just like other stakeholders, the startup studio mostly exits from your business when it is acquired or when you go public.

Since startup studios provide capital and expertise to young startups, they are often confused with startup incubators and startup accelerators. However, you must understand that all these organisations are entirely different.

While incubators and accelerators are cohort-based training and mentorship programmes, startup studios partner with individual businesses and work in the cofounder capacity; that is, they get involved in their day-to-day working. This is why they also demand huge equity in return for their services (30-60% compared to accelerators’ 7% and incubators’ no equity). Also, accelerator and incubator programmes last for a specified duration, whereas startup studios build startups from scratch and stay with them till they exit.

The stages at which you may join these programmes also differ. Incubators take in very early-stage startups when only the idea is ready, while accelerators expect a dedicated team, ideal MVP, and good traction. A startup studio’s work depends on its operating model; it may partner with an entrepreneur who just came up with a catchy business idea or the whole team when their management plan is ready. However, it usually focuses on building companies from the ground up.

Startup studios and venture capitalists fund and guide several companies simultaneously and demand equity in return for these services. However, you must understand that their work and goals are different.

While a venture capitalist plays the role of an investor, startup studios are more like investing cofounders. Besides providing money and guidance, they get fully involved in business operations, just like your how co-founding team would do.

Also, they have various tried and tested tools collected through past experiences of building companies which they offer to founders, whereas VCs only fund, guide, and help them with networking. Although quite a lot of VCs have entrepreneurial experience, it is very much limited to top-tier VC firms. While 58% of the general partners from top VC firms have been entrepreneurs before, only 28% of other firms’ GPs have found companies.

Characteristics of a Startup Studio

Who, why, when. Since startup studios are still pretty much new, it isn’t easy to understand and separate them from the other organisations. To make this clearer, just know that they have the following distinguishing characteristics:

How Does A Startup Studio Work?

Experienced entrepreneurs, professionals, and industry veterans generally establish startup studios. Sometimes, large corporations start these studios to efficiently invest their existing capital structure, business processes, and expertise into building companies that might benefit their projects and consolidate their position in the industry.

In exchange for all this capital, resources, and expertise, startup studios demand equity in the companies. Since they are much more involved than accelerators, incubators, or VCs, they expect more share in the businesses they help developing, that is, 30-60%. Corporate startup studios may also want these new businesses to be integrated into their project.

Startup studios’ working model can be categorised into two types based on where the idea comes from:

A builder studio is the one that develops companies from internal ideas. It decides on the problem to solve, comes up with a solution, validates it, and creates a working business out of it. This business then spins off and functions under its management team as an independent startup. Some examples of builder studios are Atomic, Pioneer Square Labs, Rocket Internet, and eFounders.

These studios partner with early-stage startup founders and provide them with adequate resources and expertise. In addition, investor studios are a part of the everyday operations of these businesses; they work on product development, recruitment, fundraising, marketing, PR, etc.

Each investor studio tailors to a different kind of requirements. Based on what they provide, they are of four types:

Where does a startup studio gets its capital from?

Should You Go for a Startup Studio?

Startup studios are helpful in building, growing, and scaling one’s business. As of 2019, 35% of Idealab’s companies exited through IPO or were acquired, and 5% became unicorns. Out of 415 companies create by the top 23 by 2020, 88% are still active.

Also, statistics say that the founders of previously successful businesses have 30% chances of success with their next venture as opposed to a general 10%. Therefore, one thing is for sure; you boost your chances of success by opting for a startup studio.

But is it the right choice for you?

Well, this completely depends on you, your situation, and your vision. If you lack something and would like to have someone help you with it in the cofounder’s capacity, startup studios might be the right choice for you. They can assist you with product building, PR, marketing, fundraising, etc. Their infrastructure, tools, and processes have been built after trying and repeatedly testing so you can trust them with your business. However, they require you to give up a significant portion of equity and control.

Also, opting for a startup studio means spending hours choosing the right one. When you lead an outside team into your business, they significantly impact your work culture and ethics. So, you need to be sure that your demands and expectations align with theirs.

However, if you are okay with putting this much effort and giving up equity, go for it. The startup studio will definitely help scale your business!

Did we miss something? Come on! Tell us what you think about our article on startup studio in the comments section.

A finance enthusiast, literature beau and lifelong learner. Working her way up the success ladder and her personal philosophy textbook, Kavvya believes that a good conversation is worth more than a good book. When not working, she can be found reading, writing and engaging in long walks.

What Is A Startup Studio?