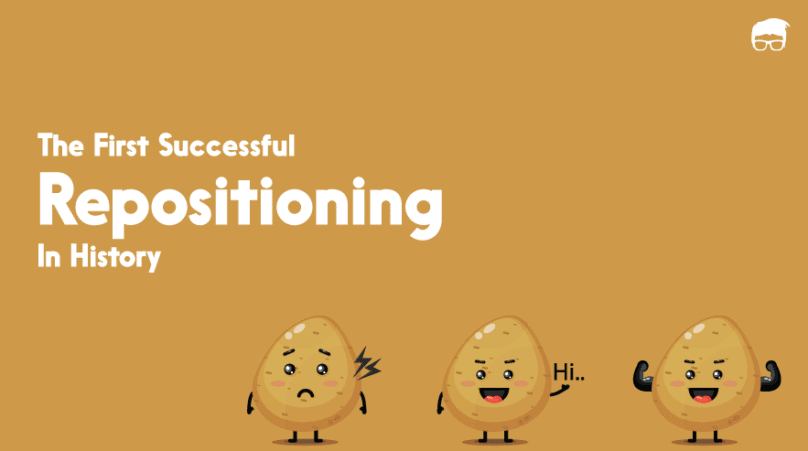 What do you do when the existing perception of your brand in the minds of your customers is unfavourable or faulty?

Do you try to change your brand’s promise and personality?

Do you try to alter its identity to suit their needs, wants, and desires better?

Well, this is what repositioning is all about.

The process isn’t new. Almost all the brands like Colgate, Nintendo, McDonald’s, Google, etc. have repositioned themselves over time.

Colgate started off by selling starch, soap, and candles. It repositioned itself as a toothpaste company after 70 years of business.

Wrigley, the famous chewing gum company, started off by selling soap and baking powder as well.

And Nokia was started as a paper mill.

But it all started long back – at times when brands were royal names and their assets were kingdoms. And the first product brand to be repositioned was not something that you’ve imagined –

The Story Of Potatoes

Unbelievably, the story of repositioning evolved from King Friedrich II the 18th-century ruler of Prussia. Prussia then was a bread-eating state with a dedicated and hearty ruler. But soon this bread-eating state could not afford bread. The prices of bread went soaring high, and Prussians saw starving as a better option than buying the expensive bread.

Within no time, Friedrich II found his kingdom on the brink of famine.

Now, to save his kingdom, he had to come up with an economical yet healthy alternative to bread. He examined all crops, their prices, nutritional value, harvest periods, etc.

The potato’s portfolio topped the exam. Potatoes were cheap, full of starch, and quick to harvest.

Well, they were, but for the fresh and beautiful flowers it bore, not for the muddy and dirty crop.

King Friedrich II saw something more valuable beneath these flowers.

He saw the agricultural and nutritional potential of the potatoes to help control the famine breakout. So he immediately ordered all peasants and farmers to cultivate potatoes.

He positioned the potatoes as – cheaper than bread, easy to grow, full of starch and fat to save one from starvation.

But the peasants paid no heed to his order. They said that the potatoes looked dirty and had no taste.

“The things [potatoes] have neither smell nor taste, not even the dogs will eat them, so what use are they to us?”

They called potatoes ugly, spotty, muddy and had no time to waste on it. King Friedrich II’s positioning was a huge fail.

As Prussians would pass by the field, they wondered what’s happening. They thought that only something very valuable would require such heavy vigilance by royal guards. This built mystery and curiosity.

Now the townspeople wanted to grab hold of the mystery item. They were so intrigued that they ventured out at night to get their hands on it.

But the King had forecasted this, which is why he had previously ordered the guards to be negligent and take long hours napping. This helped the townspeople get into the fields and steal potato tubers, and soon the whole plant.

And this was Friederich’s plan all along. By making the use of reverse psychology, mystery marketing, and scarcity marketing, he repositioned the way people perceived potatoes as a crop. Soon potatoes from the King’s field started disappearing, and the cultivation of potato started among the countrymen’s fields.

Consequently, Prussia escaped the famine as well as made the “ugly, muddy potatoes” the staple crop of the state.

King Friedrich II’s repositioning strategy was so concrete that even today if you were to visit King Friederich’s grave in Sanssouci today, you’d find potatoes laid over his grave.

Pretty powerful for a repositioning strategy created in the 18th century with no channels like phones, internet, and research, right? Let’s dive deeper into the repositioning tactics used by King Friederich:

He asked people to grow potatoes, but they didn’t agree. So he began cultivating potatoes himself and guarded the filed to forbid peasants from entering.

He used reverse psychology and convinced people toward something by doing the opposite, that is, restricting their entry.

When Friederich II cultivated his potato field, he positioned royal guards around it so that no one could see or enter the field. This aroused questions like:

Such a thought process is exactly what instilled mystery and curiosity amongst the townspeople.

Friedrich II made sure that people had just enough information – by letting people pass beside the guarded field.

But he stopped them from getting more information – by placing guards around the field.

Too much mystery would have killed the curiosity. Therefore, he made sure that the people could also get into the field at night because of negligent guards. This way he gave enough information, stopped the flow of information, and let a small channel be available to gain more information. More and more people availed of the small channel, and in the end, potato emerged as a staple crop of the area.

King Friederich II used scarcity marketing by displaying potatoes as scarce and valuable. He cultivated potatoes in a seemingly secretive fashion. When people were not given access to his field because of guards, the product (here, Potatoes) became more exclusive. And everyone likes exclusive products as scarcity marketing is known to work on the simple principle – ‘people value what’s scarce’.

As a result, people wanted to know more about the exclusive crop – Potatoes. They stole it. They cultivated it. And boom! – Soon everyone was eating the ugly crop.

Today potatoes have been labelled as a staple German food being used for pancakes to salads, dumplings, and what not! For this, the Germans ought to thank King Friederich II’s repositioning strategies.

Did we miss something? Come on! Tell us what you think about our article on the first successful reposition in history in the comments section.

A marketer with a specialisation in Economics, Law and Computer Studies. Performed social media marketing for McDonald’s, GoIbibo, and LaughGuru.

The First Successful Repositioning In History