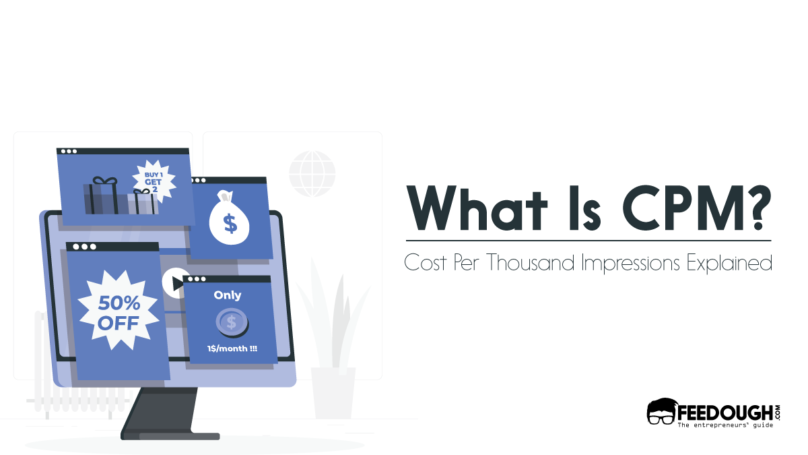 Advertising on the internet can be confusing. There are so many acronyms and abbreviations that it’s difficult to keep track of all of them. One of those is CPM, which stands for cost per mille or cost per thousand impressions.

As an advertiser, one must be aware of all the types of online advertising in order to make an informed decision on which will work best for the company.

So, what is CPM in marketing, how does it work, and how is it different from CPC and CPA?

Cost per mille (CPM), also referred to as cost per thousand impressions, is a digital advertisement pricing model where advertisers pay a certain amount for every 1,000 times their ad is displayed.

In digital marketing, an impression is the single instance of an ad being displayed. It does not matter whether or not the user takes any action, such as clicking on the ad.

Different internet companies use different methods to calculate impressions. For example, Facebook measures an ad impression when an ad enters the screen. For Google, an impression is counted every time an ad is loaded on the page, irrespective of whether the user scrolls to see it or not.

Calculating cost per thousand impressions is pretty straightforward. All one has to do is take the total cost of the ad campaign and divide it by the number of impressions in thousands.

How Does CPM Work?

CPM works by charging the advertiser for every 1,000 impressions their ad receives. The price of each CPM will differ based on a variety of factors, including the size of the ad, the placement of the ad, the type of website the ad is placed on, and the demographics of the website’s visitors.

For example, a large banner ad placed on a popular website with a lot of traffic will cost more per 1,000 impressions than a small sidebar ad on a less popular website. This is because the former has a higher chance of being seen by users than the latter.

But this system isn’t perfect. Advertisers can never be 100% sure that a human actually saw their ad. To solve this issue, several ad networks came up with the concept of VCPM or viewable CPM.

In viewable CPM, advertisers are only charged when a user actually sees their ad. A viewed ad means that at least 50% of the ad is loaded on the page and is visible to the user for at least 1 second.

Ad networks work like auction houses, where advertisers bid against each other for ad space. The advertiser willing to pay the highest price for an ad spot gets their ad displayed on the website.

CPM bidding is the process of setting a price for 1,000 impressions on an ad spot. Advertisers can either set a fixed CPM or they can let the ad network decide the CPM based on their budget.

CPM vs CPC vs CPA

CPM is often confused with CPC and CPA. However, these are three different pricing models.

CPC stands for cost per click. This is a digital pricing model in which the advertiser pays each time a user clicks on their ad.

CPA is short for cost per acquisition or cost per action. This is a pricing model in which the advertiser pays only when a user takes a desired action, such as making a purchase or signing up for a newsletter.

CPM is a popular pricing model for brand awareness campaigns as this pricing model helps them maximise their reach among the display advertising network. CPC is more conversion-rate-oriented and helps advertisers get more leads and conversions in their mid-funnel campaigns. CPA is a performance marketing metric and is mostly used by ecommerce companies to drive sales or launch bottom-of-the-funnel campaigns.

CPM advertising has a number of advantages, which is why it’s so popular among advertisers.

Several factors can affect the cost of CPM advertising. These include-

CPM is a popular pricing model for online advertising. It’s a cost-effective way to reach a large audience and can be used for both brand awareness and top-of-the-funnel campaigns. However, CPM campaigns can be inefficient as they may generate many impressions that users never get seen.

So an advertiser needs to carefully consider whether CPM is the right pricing model for their campaigns. If they’re looking for more engagement and conversions, CPC or CPA may be better options.

Did we miss something?  Come on! Tell us what you think about our article on CPM advertising in the comments section.

What Is CPM? Cost Per Thousand Impressions Explained