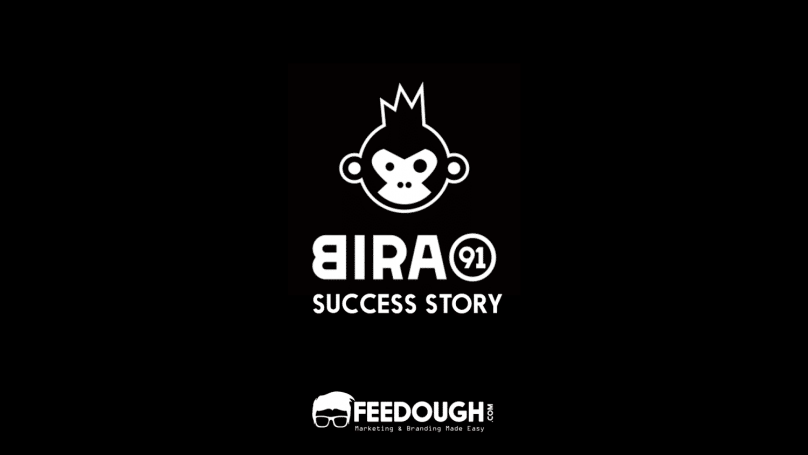 Out all of the alcohol beverages available today, which is the world’s most widely consumed alcoholic beverage? Which is one of the world’s oldest prepared beverages? Which has actually been proven to prevent kidney stones and it even strengthens your bones? Amsterdam even pays its workers with this beverage. If you truly are a fan, you surely would have gotten a clue of what this special beverage is.

Over the years, there have been many changes in beer and its variants. Craft beer is one of them. Craft Brewers have established high levels of quality as well as sustainable innovation, widening the Outlook of beer consumers and creating the most diverse brewing culture in the world.

Contents show
1 The Story of Bira
2 An Introduction to Bira91
2.1 What is Craft Beer?
3 The Choice
4 The Branding and the Design
5 The Marketing
6 The Outcome of Bira’s Marketing Strategies
6.1 The Success Story Continues

The Story of Bira

Craft beer entered India through Bira91. A simple, yet brilliant business model that would leave you nothing short of inspired. Let us get to know more about this amazing success story!

An Introduction to Bira91

Ankur Jain completed his bachelor’s degree in Computer Engineering from Illinois Institute of Technology, Chicago and began his entrepreneurial journey through a healthcare information startup.  Subsequently, he started a company called Cerana Beverages in 2009 that imported and distributed premium craft beer brands from Belgium, Germany, and the United States. The beer was sold in Delhi, Mumbai, and Bengaluru, in 330ml bottles.

Cerana Beverages (today known as B9 Beverages) is an import and distribution company. It owns India’s first and largest draft beer dispense network in restaurants and bars. It imports and distributes a portfolio covering major beer styles and more than 20 brands.

Ankur saw a potential for a beer business in India’s growing market he made a decision to pivot into that line. The first three years after returning to India, Jain spent his time understanding the beer market, taking trips to Europe to understand the different exotic beers available and choose a one for the Indian audience. It’s wise what he did: learning about the intricate details of the beers before getting into the business of it. And so he decided to specialize into craft beer.

What is Craft Beer?

Craft beer is made in a traditional or non-mechanized way by a small brewery.

His choice to this selection was clever and based on certain facts and stats. In 2014/2015, India consumed about 270 million cases of beer. Among those, craft beers (including microbreweries) made up only one percent of the market. The overall market was dominated by UBL (United Breweries Ltd.). He saw an opportunity in this.

In 2014 he raised seed funding from unnamed investors (he reached out to his friends from college and collected $1 million from 6 of them) to expand the business and launch his own bottled craft beer. In 2015 he launched it under the name of Bira91. It was formally launched in February 2015 by the Belgian Ambassador to India: Jan Luykx, in an event that was attended by over 500 guests.

The Branding and the Design

Initially, it was to be called “Biru”. Biru is the generic name for beer in Japan. But after a registration problem in Japan, he decided to call it Bira. His team spent almost nine months in the branding exercise, including picking a name, mascot, colors, and other aspects of the packaging. Bira means brother in the north of India. Also, he said:

“Bira is a name that could come from anywhere, and yet has that Indian appeal.”

“We did not want to be a [narrow] ethnic brand. The idea was to present India in a modern and contemporary fashion.”

91 is the country code of India and it made it sound more distinctive. The reverse B is, according to them, a spirit of rebellion against the conventional beers available in the market. The mascot is a monkey because most of us have a monkey inside us. Thus the name “Bira91” with a monkey on its label was selected. According to Jain, much of the early success of Bira could be credited to the design of the product.

He manufactured and packed the beer in Belgium and then imported it to India. He even signed up a Belgian brewmaster to help design the recipes.

Bira91 White Ale: It is a different wheat beer with the lack of bitterness and a soft finish. It has a taste that is sweeter and citrusy than normal beer.

Bira91 Blonde Lager: It is more conventional than its other variant. However, it is different in taste and color. It is extra malty with a delicate aroma and little bitterness.

Bira91 was selling beers that were never seen before in the market: neither in color nor in taste. Their aim was to fill the gap in the market for an unorthodox, unconventional, fun brand of beer. Bira91’s target audience was the youth of the nation and hence, they wanted to reach out to the young, urban, Indian consumer. Their design played a major role in this, as it was designed for this purpose alone. To successfully get to this audience, their strategies were pretty direct and simple. Since direct alcohol ads are banned in India, they focused only on distribution. Bira’s creative director, Delhi-based designer Dev Kabir Malik, said:

“we did not want to do those surrogate ads for CDs and cassettes and what not.”

They didn’t use any kind of marketing campaign or any sort of surrogate tricks. What they simply did was make the product available in a few pubs. The rest was left to the people who gave a really good response to the product. After that, it was a stark word of mouth publicity. Furthermore, they gained a 30% share in the premium segment without spending anything on traditional marketing.

The Outcome of Bira’s Marketing Strategies

“Bira has evoked a phenomenal response. The feedback has been excellent from people,” said The Beer Café founder and chief executive Rahul Singh.

All their hard work, their hypotheses, and estimations resulted in success. In just a few months they managed to start with one manufacturing unit each in Maharashtra and Rajasthan (another one was set up at Indore, and plans were made to set up one in Nagpur); and also managed to sell 10,000 cases in Delhi alone.

In 2016, Bira91 sold 35,000 cases (2500 barrels) a month, and also expanded its base to Mumbai, Bangalore, Kolkata, Goa, Pune, and Chandigarh as well. They had a penetration of 70% in all their markets, and are today growing at the rate of 30% month on month.
Bira91 has also raised their first round of funding of US$6 million from Sequoia Capital, Kunal Bahl, Rohit Bansal, Deepinder Goyal, Ashish Dhawan and Mayank Singhal.

Bira91 Light: As the name suggests, it is a mild beer, low in alcohol (4 percent as compared to the regular 7 percent) and low in calories (90 calories). It is a clean, crisp drink anyone can have at any time of the day.

Bira91 Strong: This beer is to give competition to the other leading beer brands in the market. It has 7 percent alcohol content and is described as the first strong wheat based beer, less bitter and high on caramel notes.

Jain believes craft beer (including microbreweries) would capture 15 to 18 percent of the market by value in around 10 years. An overall expansion in the beer market is also suggested.

But Bira has some international dreams as well –

“We want to be India’s first consumer brand with a truly global footprint,” says Jain. His aim is to create a beer brand that was “imagined in India” but can proudly be sold as a leading brand globally, starting in New York.

Did we miss something?  Come on! Tell us what you think of our article on Bira’s Business Strategy and Success Story in the comments section.

The Bira Story | How Did Bira Become India's Favorite Beer?