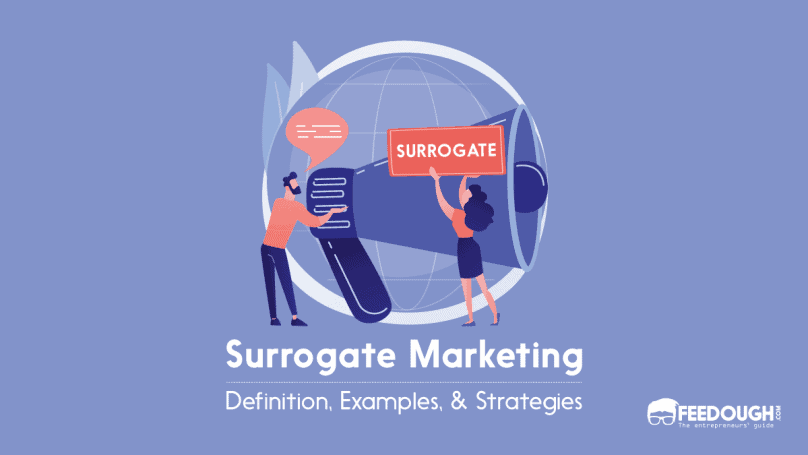 In the era of new-age technology, advertisements have become a strong source of influence on both society and the people.

From television commercials to social media platforms, companies use several channels to facilitate the marketing of their products and services that, in turn, imposes a direct or indirect influence on the lives of their customers.

As a result, in recent years, many companies are increasingly making use of such channels to promote products that are otherwise prohibited by the law to be advertised directly.

This article will discuss what surrogate advertising is, its several strategies, and the various reasons why companies are opting for it as an alternative to market their brand.

What Is Surrogate Advertising?

Surrogate advertising refers to a form of advertisement that duplicates the brand image of one product to promote another product of the same brand.

The word surrogate means a ‘substitute’. Usually, brands use surrogate advertising to promote a banned product under the veil of a substitute good.

Surrogate goods could either resemble a similar commodity or an entirely different product.  Meaning, companies advertise their products and services by disguising them for some other product under the same brand name.

A popular instance of this can be a liquor product advertised as either a soda drink or an entirely unrelated product like music CDs within the same brand name.

How Did Surrogate Advertising Originate?

Surrogate advertising’s origin can be traced back to Britain, where domestic violence became a prevalent trend as more men started drinking. Women, in turn, took to the streets and started protesting against the open-marketing of liquor-based products.

This event eventually led companies to adopt the strategy of surrogate marketing to sell goods in disguise for some other related products.

Many brands have been using products to duplicate their brand image.  Therefore, given below is a list of 3 popular industry examples that use surrogate advertising as a means to market their goods:

Today, the liquor industry intentionally blurs the line between products by advertising ‘old wine’ in a ‘new bottle.’  In other words, companies sell alcohol-based drinks under the veil of soda, fruit juice, & cocktail mixers.

A prevalent example of this is Imperial Blue’s series of advertisements on music CDs to promote their whisky brand in India where it is banned to advertise an alcohol product.

In recent years, many brands are softly targeting consumers by selling them tobacco-based goods under the disguise of pan masala and hookah substitutes.

The evolution of cannabis marketing is accelerating. Most marijuana brands sell their weed-infused products by labelling them as medicine.

Big brands like ArcView and GW pharmaceuticals fall under this category.

What Are The 5 Strategies For Surrogate Advertising?

Promoting new products with a familiar brand name is known as brand extension. Today, several companies use the brand extension to respond to a ban on the advertisement of a particular product category.

For instance, Kingfisher has promoted everything from soda to calendar and airlines under the same brand umbrella.

Promotion by association focuses on the value proposition of a brand and creates an impression in customers’ minds that the brand is for brave people.

Generally, such brands are endorsed by celebrities to help reflect the values that a company seeks to portray.

For instance, renowned Bollywood actor Shatrugan Sinha was featured in the Bagpiper club soda ad to promote its brand.

Many companies today make TV commercials, but most of them advertise a product directly. But, in the case of certain products like alcohol, tobacco, etc., companies may be banned from doing so.

Therefore, they create commercials so that they disguise an item as outside the brand’s normal product. That is, they make use of surrogate TV advertising.

For example, a company known for making alcohol may make a commercial highlighting a new soda.

Promotion Through Events And Sponsorships

Another type of surrogate advertising is done through events and sponsorships.

In this type of advertising, the company leaves its logo somewhere, such as on a wall of an event or the outside perimeter of a sporting event. This tactic, in turn, places the idea of the brand in the consumers’ minds.

Most of the products today are banned under surrogate advertising laws and are associated with several health risks. Therefore, through this advertising method, companies can bring awareness about the risks of smoking and use colourful company logos to do so.

For example, a company can bring awareness around the hazards of smoking but, at the same time, attracts consumers by bringing attention to their brand.

Why Do Companies Use Surrogate Advertising

In recent times, surrogate advertising has become a popular marketing strategy that is increasingly used for promoting banned products indirectly. It essentially utilizes a substitute product so as to communicate the real product to the target customers.

Therefore, given below is a list of 5 reasons why companies use surrogate advertising to promote their products:

What Are The Benefits And Limitations Of Surrogate Advertising?

Ever since advertising of tobacco and liquor products has been banned on Mass Media, companies have resorted to surrogate advertising tactics to promote their products. However, they come with several benefits and limitations of their own.

Therefore, given below is a list of the several benefits and limitations of surrogate advertising.

What  Are The Various Ethical Issues Concerning Surrogate Advertising?

While surrogate advertising has turned out to be a successful tactic to advertise products, such commodities’ legality is questionable in many aspects.

Many surveys have found that surrogate advertising inflicts consumers’ behaviour to purchase otherwise harmful products for their health.

It also offers children and youth a slippery slope in life as many cannot distinguish between banned products and the advertised products.

Therefore, to prevent such situations from happening, governments in many countries are taking action to impose a ban on such products’ direct marketing.

For instance, the Indian government has implemented the cable TV regulation act of 1995 to impose a ban on the direct advertising of liquor and cigarette advertisement.

Nevertheless, although liquor and tobacco businesses are restricted through laws, they remain legal as they help generate massive revenue for governments, which benefits the country’s economy.

Since Mass Media has banned direct advertisements for commodities like tobacco and liquor, many companies are starting to use proxy advertising techniques to keep their brands alive in customers’ minds.

Brand recall is the most significant feature of a surrogate commercial. Without directly referencing cigarettes or liquor, companies these days can easily promote their products and services.

Did we miss something? Come on! Tell us what you think about our article on cause marketing in the comments section.

A tech-enthusiast, blogger, and digital marketer. I am a firm believer of hard work and patience and love to cover stories that hold the potential to change the momentum of the business world.

What Is Surrogate Advertising? - Definition & Examples