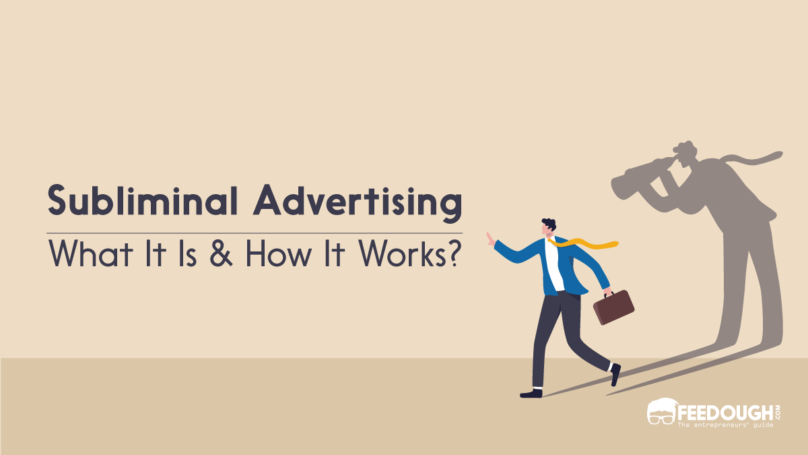 One of the most controversial and debated forms of marketing is subliminal advertising. The idea that a company can influence your buying habits, without you even knowing it, is fascinating yet scary at the same time. But is such a thing possible? And if so, how could it work?

What Is Subliminal Advertising?

Subliminal advertising is a marketing technique that involves exposing individuals to subtle messages that are embedded within other things. This might be an image, a section of the text, or even video/audio. These messages are designed to affect the mind – consciously or subconsciously changing the customers’ buying habits, beliefs about certain products, etc.

Its goal is to influence without the target audience even knowing they are being influenced. In fact, they won’t realise these messages have any effect on them at all.

In simple terms, subliminal advertising leaves the viewers with a message in their heads that they did not consciously acquire from the advertisement.

For example, a simple image of a group of happy friends, with a Coca-Cola logo, in a cinema outlet before the movie starts or during the interval is subliminal advertising. Although individuals would think it to be an ad to increase brand awareness, its message is to make them want to drink coca-cola during their time at that place.

How Does Subliminal Advertising Work?

Subliminal advertising works around subliminal messages or communication. These messages are not directly broadcast to an individual, instead, they are embedded within another message(s).

Subliminal messages aim to affect the mindset of an individual, without them even realising it. A simple example of this is in television advertisements.

Often, companies will use certain images or symbols in their adverts that associate with the product they are trying to sell. For example, a company selling a weight loss product might have an advertisement where a young, slim girl is eating a grape, and the healthy juice colour makes people subconsciously associate a healthier lifestyle with drinking this product. This technique relies on how your brain automatically associates images with products.

A real-life example of such a subliminal message is SFX magazine’s font style in its Jennifer Garner issue. SFX magazine is a popular magazine that covers a variety of science fiction movies and TV shows. In this special issue, SFX decided to have an interview with actress Jennifer Garner. And they tactically hid the bottom of the letter ‘F; that suggested the real title to be SEX. This was a ‘subliminal’ message to the reader, suggesting a more sexual theme behind the interview.

Unlike other marketing techniques such as direct or indirect advertising, the viewer/listener does not see subliminal messages unless they know what they’re looking for. They think it’s just another part of the advert and of no interest. But this is the key – the messages are actually designed to influence them unconsciously.

There are three main reasons why marketers use subliminal advertising-

The advantages and benefits of using subliminal messaging as a form of advertising are endless. Outlined below is a list of the main advantages:

Although subliminal messaging can be advantageous for an organisation, it does come with some disadvantages that must not be ignored. The following points highlight some of the disadvantages:

Subliminal advertising is becoming more popular among marketers today because of its ability to create an impact on consumers without them being aware of it. If used correctly, subliminal messaging can be a powerful tool for marketers who want to attract consumers to their products and services.

But it is still impossible to say whether or not subliminal advertising is effective. This is because there hasn’t been any conclusive evidence to prove that these messages are enough to bring in the desired results. More research needs to be done before marketers can have a more solid opinion about whether this type of marketing is beneficial for them or not.

But one thing is clear: subliminal advertising has a lot of potential. The power to influence a person’s subconscious mind makes it a powerful tool for marketers who want to reach their customers in the most effective way possible.

Did we miss something?  Come on! Tell us what you think of this article on subliminal advertising in the comments section.

What Is Subliminal Advertising? How Does It Work?