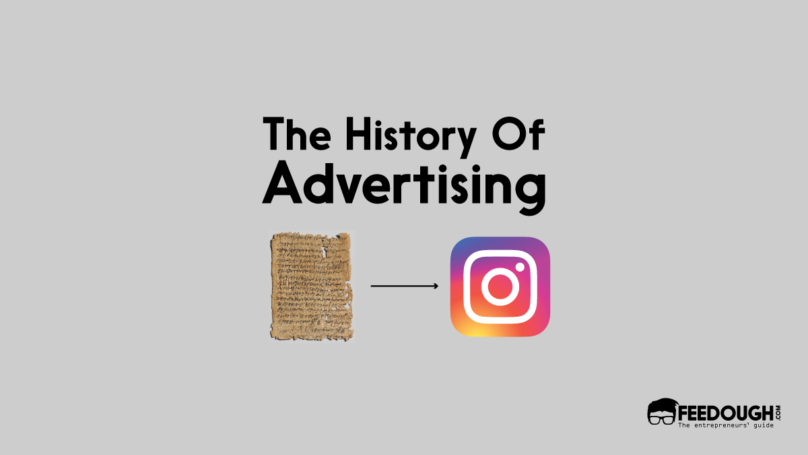 Where 1st paid advertisement cost $9  in 1941, today, the advertising spend globally has hiked to:

The history of advertising timelines started in ancient civilisation. It all commenced when people discovered fire, gathered fruits and nuts and protein-rich animals, and settled near water to catch fish.

Soon after, people installed their settlements, uncovered the importance of earning, and wanted to sell their products.

It was the birth of advertising.

As the world kept evolving, with the radical changes and quantum jumps, advertising and marketing grew too. And today, advertising is so mainstream that it follows humans everywhere. It has gained power over humans, so much so as fire, technology, and food.

Let’s get back in time and learn about the interesting facts of the dramatic revolution of advertising and learn how it helped businesses to grow and develop interpersonal relationships with their customers.

No one knows how advertising began. But we know that even the earliest businesses started to use it to differentiate themselves from others.

Moreover, early advertisers used wall painting and oral ways to sell products, which is still present in many parts of Africa, Asia, and South America.

After a while, sellers advanced their advertising techniques when they realised there were more ways to sell their products.

The four primary forms of advertisements that existed during the pre-modern age, i.e., before printing, are:

1439: Global Spread Of The Printing Press

With the invention of Gutenberg’s printing press with movable type in 1439, the mass printing of flyers and brochures became possible globally. Print advertisement led to materialisation similar to flyers and print advertising we see today.

Gutenberg’s first significant print work – the 42-line Bible in Latin was printed between 1452 and 1454.

Modern advertising began with the advent of magazines and newspapers in the 16th and 17th centuries.

The first gazettes appeared in Venice in the mid-16th century. The concert rolled up from there, and the concept of weekly publications reached Italy, Germany, Holland and, in the 1620s, Britain and other regions.

The first newspaper ad appeared in the Boston News-Letter on May 8, 1704. It was a real estate advertisement selling a plantation on Oyster Bay, Long Island.

The newspaper carried advertisements from the outset for books and quack medicines and later for various products to mitigate the advertising cost of printing and distribution.

The advancement in printing gave rise to:

During the Industrial Revolution, advertising dramatically increased in the US after the 1870s with the expansion of manufactured product supply to the larger market. The invention of mass marketing helped influence the behaviour of the population on a larger scale. So much so that the total advertising budget went from $200 million in 1880 to nearly $3 billion in 1920.

The boost in the use of advertising gave rise to the following in advertisements:

Advertising met radio in 1922 when the first ever radio commercial aired on WEAF, New York, on August 28. The government prohibited direct selling. Thus radio host H.M. Blackwell arranged a 10-minute talk on the goodness of living a carefree life in the suburbs at the Hawthorne Court Apartments in Jackson Heights, Queens. That 10-minute talk was backed by direct-indirect selling and cost $50.

In 1925, the out-of-home advertising technique started getting into play, with sequential billboards gaining popularity. So much so that Burma Shave, across the US, propped the rhyming billboards, which took the company from unheard to the number two shaving cream company in the US.

Advertising came under heavy pressure during the outbreak of the Pacific War in the 1930s. The depression led businessmen to lay back their advertising budgets drastically.

The New Deal, which had a series of programs, public work projects, financial reforms, and more, gave rise to consumerism and minimised the need for advertising.

Moving to 1940, advertising played a role in the ideological mobilisation of the American people – as they helped to redefine the “American Way of Life” in terms of a commitment to free enterprise. The role of advertising in the social and political context created a dominant consumer culture in the post-World War II era.

When millions of Americans settled down in new housing, they spent heavily on automobiles, clothes, furniture, housing, and appliances. Their needs and the television’s entry gave a great enlarging boost to advertising.

1960: The Psychologists Got Involved In Advertising

The 1960s was the golden era in the history of advertising.

At this time, professionals started to base their ideas on psychology and big data and allocated big budgets. The involvement of psychologists, researchers, and focus groups transformed advertising into a real calculated science.

In 1970, businesses used telemarketing as a common tactic to call their customers and sell products. It was an office version of door-to-door direct sales.

1973: The Beginning Of The Digital Age

The synergy of psychology and the advent of new technologies continues to advance the advertising landscape.

The emails were being designed since the 1960s. With the introduction of the internet, email sharing became common in government, business, defence/military industries, and universities.

Gary Thuerk sent the first email marketing blast to 400 people to promote his company’s computers, which resulted in sales of $13 million.

In 1984, Apple launched its hugely successful Macintosh, convinced by the advertisement made by Chiat/Day and directed by Ridley Scott, which got telecasted on television only once during the 1984 Super Bowl football game. The ad cost them 1 million pounds but reached 26.4% of American houses.

Print advertising with newspapers worked well, and in 1985, the US industry revenue reached $25 billion. The emergence of desktop publishing contributed highly to revenue growth.

Cable Television From The 1980s

The late 1980s and the start of the 1990s witnessed the experience of cable television and, in particular, MTV.

MTV induced psychological factors into the ads and created a new type of advertising. For consumers, advertising becomes the focus rather than the by-product.

Special channels got dedicated to advertising, including:

1990-1994: The Advancement Of The Mobile And The Start Of Text Advertising

Friedhelm Hillebrand and Bernard Ghillebaert first developed the SMS concept in the Franco-German GSM cooperation in 1984.

The first message ever sent was by Neil Papworth, a former developer at Sema Group Telecoms, on December 3, 1992.

As Google had a great consumer base, in 2000, it developed Google AdWords. This advertising platform allowed businesses to target audiences and run ads based on their search performance and browsing history. Later in 2007, Google acquired DoubleClick for $3.1 Billion.

With the advent of social media in 2003 and its rapid growth in popularity, social media, including LinkedIn, Myspace, Twitter, and Facebook, started using their platform and audience to advertise products in 2007 directly and indirectly.

In 2005, in Google AdWords, native Gmail ads became accessible to all advertisers.

The AdSense advertising platform launched in 2003 was the first ad network to match ads on a blog and made it possible for bloggers to make money from their blogs.

In 2008, 2.4 Billion people in the UK watched online videos, which rose from 1.6 Billion views in 2008. However, since 99 per cent of all videos viewed were viewed on YouTube.com on the property, it made YouTube set in motion 7 Youtube Ad formats in 2009.

In 2012, Social Media became one of the best lead generators. Social media was used to generate leads and revenue as:

Marketing automation began in 1992. But it was in the mid-2000s when the automation industry started taking shape in the advertising industry.

It was after 2012 – 2012s when automation started to become a familiar term in the industry and gained popularity.

Today, automation and AI transformed adverts and emails using big data analytics, machine learning, and other processes. In fact, it is predicted by Statista that markets will spend 126 billion dollars by 2025 on (AI) software worldwide.

From posters and rock paintings to marketing automation, the purpose of advertising has always remained the same:

But, the forms and ways of advertising have changed and rapidly evolved. From being a large blanket of operation, it now has a personalised approach that enables the businesses to engage with customers more and drive higher ROI.

The history of advertising signifies how rapidly approach, methods, understanding, tactics, technology, and customer relation change and develop. And how crucial it is to accept and stay agile in this changing world.

Did we miss something? Come on! Tell us what you think about our article on Advertising History in the comments section.

Ravpreet is an avid writer, prone to penning compelling content that hits the right chord. A startup enthusiast, Ravpreet has written content about startups for over three years and helped them succeed. You can also find her cooking, making singing videos, or walking on quiet streets in her free time.