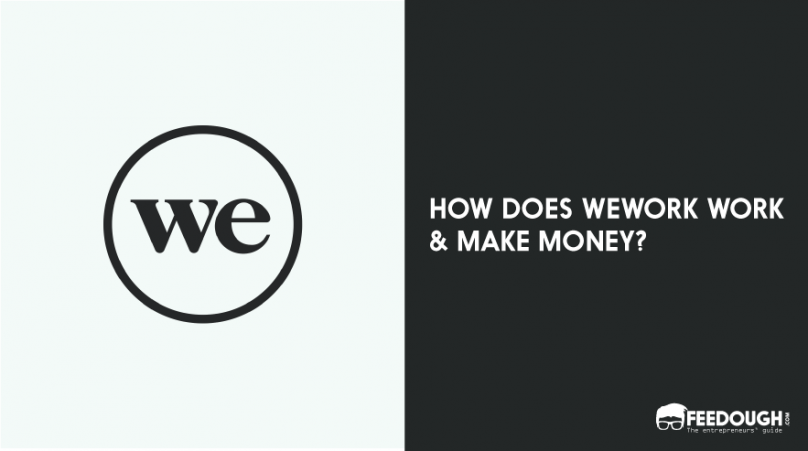 With Microsoft, Facebook, Salesforce, and even the U.S. Air Force having teams that call WeWork home, they sure have had incredible growth. WeWork is currently the world’s second most valuable startup of 2019.

Their exponential growth has also prompted dozens of questions: What exactly is the WeWork business model? How does WeWork work and make money? Why is a real estate startup valued like a tech company?

Contents show
1 What is WeWork?
2 How Does WeWork Work?
2.1 Why Do Landowners Lease Out To WeWork?
2.2 Investors, Backers, And Current Valuation
3 How Does WeWork Make Money?
3.1 WeWork Memberships
3.1.1 Desk Spaces
3.1.2 Private Offices
3.1.3 On-Demand Access
4 Why WeWork Works?
5 Diversification & IPO – The We Company
6 Is WeWork Sustainable?

WeWork is a real estate company that offers co-working spaces for rent. Their M.O. is the most common of all real estate business models.

They lease property from landowners, transform it to create a community feel, and sublease it by the day or month to startups, freelancers, companies and corporations in need of working space.

Within less than a decade they have grown to become the most prominent and largest co-working chains in the world, having over 46.63 million sq. ft. in shared office space as of 2018 all over the world.

How Does WeWork Work?

Even though they are starting to buy a few of its buildings, having bought one in Manhattan for use as their HQ, they don’t own many. In order to fix this, they’ve started setting aside funds to purchase the properties. For the most part, they stick to long term leases and spend a lot of upfront capital furnishing the space as they see fit, and then sublease the space at a premium.

This brings us to –

What stops the owner of a building from creating their own shared offices and co-working spaces?

Many owners actually do create co-working spaces and directly lease it out. But it’s not that simple or easy for a few reasons.

Why Do Landowners Lease Out To WeWork?

Instead of creating, maintaining and hoping that their venture takes off all on their own, by leasing out to WeWork, they can get consistent, arguably lower-risk paychecks and also make their buildings more valuable.

For WeWork, each lease is under a different subsidiary, so even if they encounter a loss at one location they can rebalance costs from other locations and the company as a whole, stays somewhat protected. But mainly, they can easily pay for the lease one way or the other, which makes them more dependable.

And, unlike a property owner, WeWork can set its prices low for attracting far more customers than an owner ever could even if they owned prime real estate.

But how can WeWork sell a service for less than what it costs?

At the start of 2019, WeWork received a $2 billion investment from SoftBank who had already invested $4.4 billion in a previous funding round. So yes, Softbank, in a way, is paying for part of WeWork’s expenses in return for long-term gains.

Along with SoftBank’s investments, the company has also attracted investment from Goldman Sachs and JP Morgan. This brought their total funding to more than $11 billion, giving them a valuation of around $20 billion at the time of writing (obtained from a regulatory filing for its public offering; down from their previous $47 billion valuation at the end of 2018).

That is $20B in rental commitments that they will be responsible for paying throughout the next 5-10 years.

Here’s how they pay for their contracts.

How Does WeWork Make Money?

WeWork earns money by renting out the leased spaces via various types of memberships.

WeWork offers various types of membership options catering to almost every sector, be it entrepreneurs, startup companies, freelancers and even large companies.

This is their lowest-value offering that starts from around $190 a month and can reach upwards of $700. The working spaces are managed by WeWork, with amenities like cleaning, maintenance, IT, and utilities handled by WeWork staff.

Private Offices are where WeWork’s model gets into high gear and provides for enterprise clients such as Microsoft, Facebook, Adidas, and Salesforce. The standard private offices are intended for small teams, remote workers, and small companies, with prices starting from $410 a month for a single person to upwards of $1,200 based on your configuration.

For enterprise clients, WeWork carries over the Standard Private Office features mentioned above along with the option to have WeWork design and build out a completely custom office and let them manage the operations in the same way as it would at typical WeWork locations.

Apart from making money from rent, WeWork also provides additional services for a fee, such as partnerships with local businesses, and car rentals.

But, how did this company reach a $20 billion valuation just by subletting to others? How did they attract so much funding following just this model alone?

The reason why WeWork was able to do so and be so much more successful is that WeWork has mastered the art of telling a story.

While not forgetting the corporations and enterprises, WeWork understood the millennial crowd. They cashed in on the sudden rise of startup and freelancing culture back in 2010.

Here’s what they have going for them:

Recently, they’ve also started to diversify into other fields that compliment well with their “community” ethos.

Diversification & IPO – The We Company

WeWork re-branded themselves at the start of 2019 to The We Company as a part of their goal to push beyond just providing co-working spaces and into other ventures. This has also helped them reduce the risk of losing out on their cash-reserves in case of an economic downturn.

WeWork has also acquired 18 other companies in a series of acquisitions after raising the $4.4B from Softbank in 2017. Their acquisitions were based on helping develop their above mentioned real estate ventures.

WeWork also filed its paperwork for an initial public offering (IPO) on August 14, 2019, to sell shares of its stock under the ticker symbol “We”.

WeWork has much higher expenses than those typical commercial real estate companies because they do all the community building stuff and it’s unlikely that WeWork will be able to charge substantially higher prices just for this community aspect alone to cover their expenses.

In addition to this, it’s also true that many of its customers would be in the weakest position in case of an economic downturn which is a big risk.

They’d collapse in case of an economic downturn where startups and freelancers start to disappear. They would have to pay for the $20B that they’ve got in rental commitments from a finite and depleting cash reserve (est. to be $6.6 billion).

This type of business model and their way of operating is still unproven, especially during downturns. Take the example of their competitor, IWG (formerly Regus), an office space rental company that was established in 1989 and follow a comparatively formal corporate business tone. Their clients consist of companies like Google, Toshiba, and GlaxoSmithKline. IWG was doing well till the dot-com crash, after which they filed for bankruptcy since the companies that used their working space themselves went out of business.

In order to combat this, WeWork has entered into some revenue-sharing leases in some of its locations, but not all. Though this adds some protection, it doesn’t mean the company is even close to bullet-proof, especially considering the eight-year-old company remains unprofitable to this day.Even though their revenue has been increasing year after year, so has their losses. Between 2017 and 2018, WeWork reported that its revenues jumped from $886 million to $1.8 billion. Yet, it also took almost $2 billion in losses during 2018.

Economic downturns are inevitable and they would have to protect themselves by expanding their operations to newer spaces. WeWork has to start focusing on reducing their expenses or risk being seriously affected in case of a recession.

Did we miss something?  Come on! Tell us what you think about our article on WeWork Business Model in the comments section.