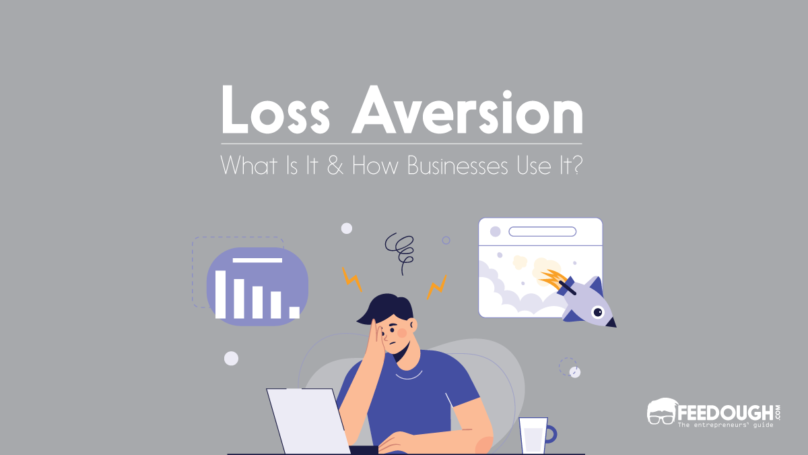 Humans are roughly 2.5 times more sensitive to losses than they are to gains of similar size. This explains why losing a 50$ bet hurts more than winning a 50$ bet. The idea that people tend to feel more pain from losing something than pleasure from gaining something of equal value is known as loss aversion.

But what is loss aversion? How does it affect human behaviour?

What Is Loss Aversion?

Loss aversion is a concept in behavioural economics that describes people’s preference for avoiding losses over accruing equivalent gains.

It is a cognitive bias that explains why for individuals, the pain of losing is much more powerful than the joy of gaining something. In other words, people tend to be more motivated by avoiding losses than they are by pursuing gains.

For example, the pain of losing $50 dollars is far greater than the joy of finding $50.

Loss aversion typically plays out when people make decisions that involve risk. The fear of regretting a bad decision, such as making an investment and losing money, causes them to be more conservative in their approach.

Why is Understanding “Loss Aversion” Important?

Nobody likes to lose, especially when it comes to money. However, even rational thinkers can fall prey to their loss aversion bias. Here’s how possessing a sound knowledge of loss aversion can help anyone make better business decisions:

Loss aversion can prevent people from making the best decisions for themselves to avoid the risk of failure or loss as much as possible. Though being risk-averse is helpful in a lot of scenarios, it can prevent people from making logical choices as the fear is too intense or powerful. In such cases, people develop a negativity bias, i.e. giving more importance or weight to negative experiences than to positive or neutral experiences. For example, a person might be hesitant to invest in the stock market because they are afraid of losing money, even though they know that investing could earn them a higher return in the future.

Sunk costs are outlaid of time, effort and money that are already spent. And since they are already invested, they can’t be recovered. Humans tend to focus too much on sunk costs, leading them to believe that they have too much invested to quit. For example, If a person purchases a movie ticket for 10$, they will feel like they have to stay for the entire movie, even if the movie is terrible. This is known as sunk cost fallacy. This unwillingness to concede a loss on a bad investment simply arises from the tendency to avoid a loss at all costs. That’s why people continue to pump money into a bad investment, hoping it will turn fruitful one day. However, this only motivates irrational behaviour and results in a greater loss of resources.

Loss aversion broadly affects a person’s judgements and decision-making, such as forming a preference, valuing a product and purchasing. Below are some common examples of loss aversion impacts real-life situations:

The endowment effect describes how people tend to assign a higher value to the products that they already own than to identical items they don’t own. For example, if a person is offered to exchange their favourite pair of sneakers (that their mother gifted to them) for a new pair, chances are they will not exchange them and continue to wear them.

Status quo bias describes how people have a tendency not to act or to prefer inaction so the current state of affairs remains unchanged.

This bias stems from the innate desire to prevent loss at any cost and can be used to explain why people fail to take advantage of investment opportunities. Rather than placing their money in investments with a certain degree of risk, people often leave their money in low-yield savings accounts. The status quo bias leads people to maintain their current financial situation instead of taking a risk and improving their financial gains.

The disposition effect is the tendency to hold onto assets that are losing money in the hopes of turning them around while prematurely selling off winning assets to make a profit. For example, investors tend to hold onto stocks that have fallen in price for far too long while prematurely selling off stocks that have risen in price.

While the two terms may sound like the same thing, loss aversion is different from risk aversion.

Another key difference is that while risk aversion is a rational decision-making strategy, loss aversion is just an emotional response to losses.

Customers make buying decisions based on the desire to avoid a loss. Marketers carefully study this behaviour and take advantage of it as they plan campaigns or write copies. Here are a few common tactics that they commonly use:

Did we miss something? Come on! Tell us what you think about our article on loss aversion in the comments section.

An ardent reader, full-time writer and a lover of all things purple. Riya is an entrepreneurial spirit, making her way in the start-up industry through her expressive writing. When not working, you can find her jamming to music, watching period films, eating sushi, or petting cats.

What Is Loss Aversion? - Definition & Examples