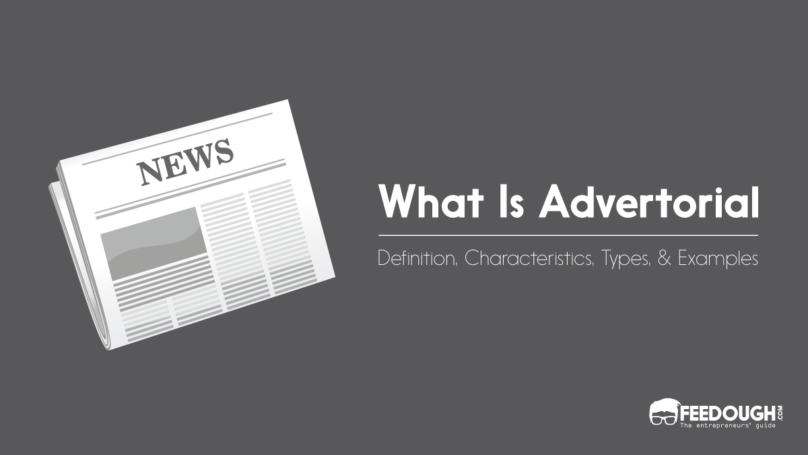 Ads don’t always look like ads. They can be disguised in a way that they look like regular content. The advertiser or marketer might actually pay the publisher to publish this disguised ad in their newspaper, magazine, or digital publication.

When that happens, it is called an advertorial.

An advertorial is an advertisement presented in a format that looks like legitimate and original editorial content. The advertiser, or marketer, pays the publisher to publish their ad.

Unlike a traditional advertisement, advertorials look like regular editorial content and are even written in a way to give information about a product or service and not merely sell it.

The advertorial can be written as if the marketer was an industry expert, giving details about the industry trends or how their product is better than its competitors.

Usually, publications include a disclaimer somewhere in the advertorial, telling readers that it is an advertisement and not the regular content.

Characteristics Of An Advertorial

But there are some general characteristics that most advertorials include:

Advertorials can take many forms, based on what the marketer wants to accomplish with the ad. Different types of advertorials are usually chosen depending on what result is needed.

This type of advertorial is helpful for consumers because they can compare two or more products side by side, making it easy to decide which one they prefer.

Comparative review advertorials are perfect for newcomers in the market who have little brand awareness. Marketers use this advertorial type to generate interest in their product with less spending.

Promotional or image advertorials are where the advertiser publishes content about their brand or offering intending to build a favourable brand image.

They might publish success stories highlighting the positive effects their product had on someone’s life or they will talk positively about their business and what makes them unique without directly comparing it to the competitor.

Promotional advertorials are more about creating an image that appeals to their target market rather than generating sales through hard-selling, which is why they don’t have a call to action.

Another common type of advertorial is a journalism advertorial that looks like the regular publication’s content. It’s written as a news article with a catchy headline and body that looks just like usual editorial.

Journalism advertorials are usually published in magazines and newspapers since they have more space to play with. They might not directly talk about the advertiser’s product, but it will still be mentioned in the context of an interesting story or topic relevant to their target audience.

Advocacy advertorials are where the advertiser creates content about an issue they care about so that their product can be associated with it.

Although this type of advertorial goes beyond selling a product, it is still related to what they do so that readers will feel encouraged to purchase their products in order to support them.

The marketer might publish content about how their products contributed to a charity cause, or they might talk about improving the environment, without directly selling their product.

Consumer guide advertorials are content written with the intention to direct the reader on the right path. For example, an article about how to find a reliable plumber might link to the brand website for people to contact them easily.

The main purpose of this type of advertorial is to direct the reader to take action without appearing too promotional.

Components Of An Advertorial

An advertorial is a combination of an ad and editorial content.

In print, it looks just like a usual editorial column. In digital publications, you will find them in between regular articles, where the advertiser does not want their content to look too promotional.

Advertorials use a similar style as journalist writings. They have

Advertorials can be used to build sales, but they are targeted at building brand image through positive associations with their product. Although advertisers want readers to take action by buying their products, this is secondary to their main objective which is about building a favourable impression of their brand in general.

Advertorials are usually published in print, but you can also find them online.

There are many types of advertorials and they all vary depending on what the advertiser wants to achieve with their content.

Did we miss something? Come on! Tell us what you think about our article on advertorials in the comments section.

What Is Advertorial? - Characteristics, Types, & Examples