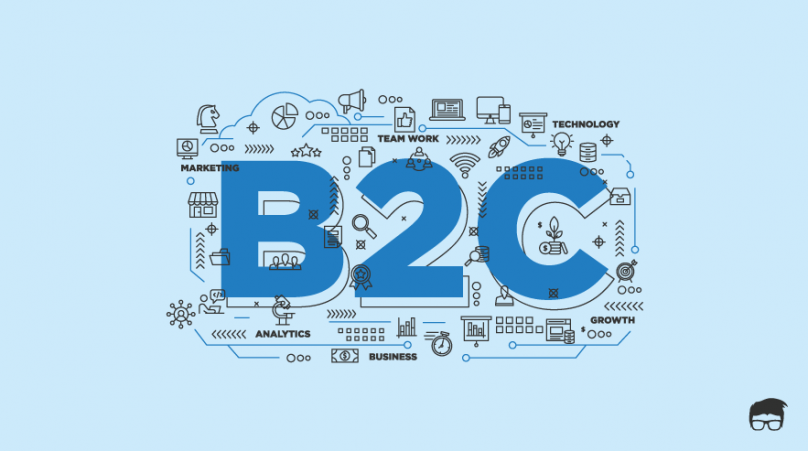 The latter is known as the B2C model.

What is Business to Consumer (B2C)?

Business to Consumer (B2C or B to C) is the method of doing commerce where businesses trade and transact with directly with end customers who buy the product for consumption.

Unlike B2B, these customers don’t use the traded offering to step up their offering or to resell it to make profits.

Take the case of a fast-food chain. This company is said to follow the B2C model since it is a business that serves consumers and individuals, not other businesses.

Do note that, B2C is quite different from B2B.

B2C or Business to Consumer is the type of business model where the businesses serve customers and unlike B2B, do not serve other businesses.

The different types of B2C models.

With the B2C model being a large and complex model, let’s look at a few popular and mainstream types –

In the product-based B2C model, businesses sell products to consumers. The business may act as a supplier and sell customized products to individuals either via their own physical or online stores.

An example of a product-based B2C company would be a shoe brand selling its shoes to its customers via its physical storefront. Adidas is a great example of a B2C shoe company that produces and sells its branded shoes to consumers and individuals via its online and physically located stores as well as on ecommerce sites.

It helps to emphasize the fact that the products themselves are generally physical (in nature), hence require a much higher initial investment compared to other B2C types.

An example of service-based B2C would be a lawn mowing business.

The service-based B2C companies may have an online or physical presence or both, but it boils down to the service that the company provides.

Adobe and Microsoft are great examples of “product-focussed” software-based B2C companies. They provide software products for editing and creation of media and documents respectively to the consumers.

Netflix and Spotify are great examples of a “service-focussed” software-based B2C companies. Both help provide video and music services to consumers via the use of the software.

These services are usually membership or subscription-based. The services can be easily deployed as required, making them largely scalable compared to software products.

While these are a few of the major types of B2C models, there is one other field that can be categorized separately – the online B2C model.

The advertising-based B2C model is where online sites use content to bring visitors – could be a website, blog or forum – and earn revenue by displaying ads on the site.

High volume sites like news publications and tech websites such as The Huffington Post and TechCrunch are great examples of advertising-based B2C companies.

Social media platforms are great examples of online B2C businesses following the community-based model. Take Facebook – it helps connect and build online communities among its users which then leverages to promote their products to earn money via the platform.

B2C ecommerce is where businesses sell (and buy) goods to consumers and individuals. This is enabled through the use of online marketplaces and stores. B2C e-commerce is a major field in the B2C model and can be divided into two different sub-models. They are –

Compared to B2B, the B2C market is quite large and varied. While there is a limited number of clients for the niche in B2B, B2C companies have the advantage of targeting a larger number of consumers. This number is quite high even if you aim to target a niche B2C market.

Expanding a B2B business requires a lot of investment and involves a lot of overhead. B2C, on the other hand, is much easier to expand to other niches and markets – be it vertical or horizontal expansion.

It is much easier to market to individuals than to other businesses. B2C businesses can use social media and content marketing to easily boost sales, bring in new customers, all while advertising.

Unlike the B2B sector, where it is usually harder to obtain and use data to predict newer trends, B2C has no shortage of data, if implemented properly. Each individual is a data-trove and this data, when used properly, can help the B2C company gain quite the edge over others.

B2C is among the most common type of businesses started compared to B2B. This is due to lesser overheads present in starting and running a B2C. This means that is a lot of competition within the same field for the same product when compared to a B2B business.

Unlike a B2B business, the products sold and their prices are minuscule in B2C. So, one way of making back on the lost revenue is by focusing on quantity over quality. This increases the risk of not being able to make back enough to run the businesses in case of lowered sales numbers.

The B2C sector is riddled with middlemen who tend to mark up and sell it for a higher price. This leads to consumers having to pay a larger rate than intended. Other than that, this causes a disconnect between customers and businesses. It also makes it harder for businesses to collect relevant customer data which could be used to improve their product and drive sales.

Even though the B2C market is vast and diverse, it is also more segmented. This hinders quick decision making due to the sheer number of segments present for businesses to consider.

Let’s look at a few examples of B2C companies to get a better understanding.

They are a great example of a B2C company since they design, develop, manufacture and sell consumer electronics to consumers.

McDonald’s is the American fast-food chain that has a global presence and known for its hamburgers.

McDonald’s is a business serving fast-food to consumers and individuals and can be identified as one of the biggest B2C companies in the world.

Amazon is the biggest ecommerce site in the world and is also considered as one of the four biggest tech companies in the world.

Amazon’s own products, Amazon Prime, and Amazon Originals (Amazon funded media) are all great examples of the B2C nature of the business.

TOMS is a for-profit organization that designs and manufactures shoes, eyewear, and apparel.

TOMS is a business creating and selling shoes and apparel to consumers via their physical, online storefronts and through retail outlets.

The B2C model is fairly simple. Though the lines may blur between B2C and B2B in a few areas, a business catering to consumers is a B2C company. If a business caters to another business (or for business purposes), it is B2B.

Starting a B2C is as simple as providing a product or service targeted towards individuals which helps elevate their problems.

Did we miss something? Come on! Tell us what you think about our article on Business to Consumer (B2C) in the comments section.