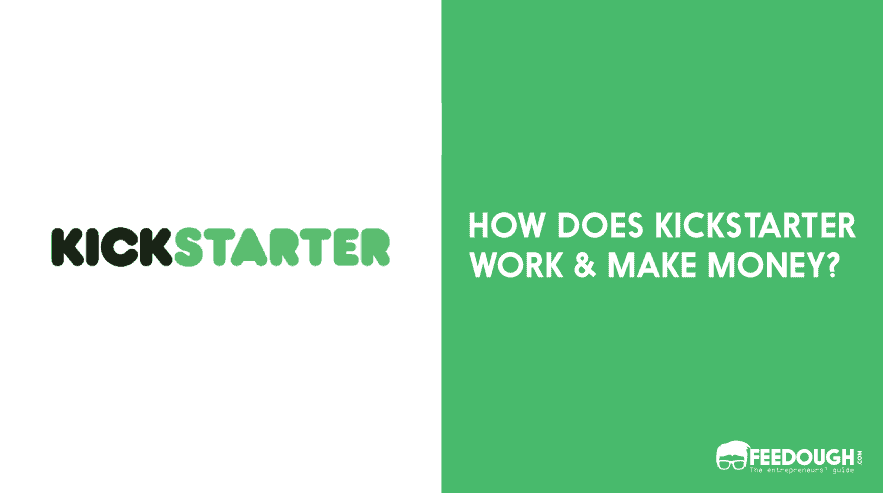 How Does Kickstarter Work & Make Money?

The name of the game is “Many hands make light work”.

There are a lot of examples which support this old maxim.

Take Reddit for example. When we get together on a single case, we tend to surprise everyone in what we can achieve. A quick Google search on “Cases solved by Reddit” will present you with many interesting reads. The humankind as a “collective” is a really powerful force to reckon with.

Wondering what I said above has to do with Kickstarter?

Well, Kickstarter works in a similar fashion too. It helps turn average Internet users into backers of new and innovative things.

Let’s find out how.

Kickstarter is a crowdfunding marketplace focused on providing resources, support, and funding to creative ideas and products.

The company was started in 2009 with a mission to bring creative projects to life by using crowdfunding and crowdsourcing.

Back in 2001, Perry Chan, founder of Kickstarter, wanted to bring two DJs to New Orleans to play at the local jazz fest, but the gig never happened because it cost too much.

This led him to come with the idea of the customers being able to buy tickets for a show. Once a set target was reached the gig would happen, or the customers will never be charged. This was a great vision to support new ideas.

The mission, even today, is to help people with ideas to put present them and obtain funding from the internet as easily as possible.

The company’s business and operating model revolves around the concept of crowdsourcing and crowdfunding where support and funding to creative ideas are offered by the global community of millions of people.

Kickstarter just bought the concept to the next step, onto the internet, but with few tweaks of their own to prevent misuse of the platform.

Well, those changes that they made sure seem to be working.

Ever since they began, they have successfully funded over 164,725 projects and raised over $4.4 billion as funds for projects

How Does Kickstarter Work?

Now that you know the basic terms of Kickstarter’s business model, it’s time to put them to places and answer your question of how does Kickstarter work.

Kickstarted is a marketplace where people with creative ideas meet people who want to support creative ideas and buy innovative products. The creators launch their projects on the platform with a set funding goal. They mention everything about their idea through text, images and videos, and even mention the rewards the backers will get if they support their idea. The rewards can be categorized into tiers with the backer supporting more getting more rewards. The backers are people who support creative ideas voluntarily or because they like the rewards associated with it. The support is financial and the backers get to choose the rewards according to the money they pledge in.

Once the funding goal is achieved. The backers’ cards are charged with the amount they’ve pledged and the amount is transferred to the creators. And the backers get their rewards as promised.

Say that you’ve always fancied having a cold brew coffee maker at your home. This could save you time from visiting your local Starbucks to get your fix.

You go through the very descriptive “About” section:

And check out the people behind it:

If satisfied with what you find, you choose a pledge that fits your budget or rewards you as you like:

Kickstarter operates on a marketplace business model. It is basically a marketplace helping the creators connect with the pledgers; just as a similar marketplace, say Amazon, helps connect the buyers with the sellers.

Kickstarter doesn’t own any of the projects or ideas nor do they set the prices. It just has successfully interlinked the two business models of crowdfunding and online marketplace together to disrupt the crowdfunding industry. The business model is complemented with the following business strategies –

With an estimated annual revenue of about $34.6 Million, this strategy sure seems to be working in their favour. But wait, how exactly does Kickstarter make money?

How Does Kickstarter Make Money

Even though Kickstarter is a Benefit Corporation, it is still a for-profit business. The company earns its revenue by charging a 5% commission fee on the total funds raised. It is also to be noted that they charge a separate fee for payment processing (payment gateway charges).

Even this $500 for a $10,000 project amounts to good profit for the company as there are not many costs involved. The company consists of just 159 people who have worked hard to create this platform back 164,725 projects and raise $4.4 billion. The major cost centres include storage spaces, general and administrative expenses, salaries, data centres, rent payments and servers, etc.

Now, as a bonus, let’s look at how Kickstarter fares against its competitors, specifically Indiegogo, since many assume both platforms to be the same.

Indiegogo, also a crowdfunding site, is considered to be the major competitor to Kickstarter.

Let’s clear things up a bit.

Kickstarter does not allow for the posting of personal projects, charity and non-tangible products. There must be a working prototype. Kickstarter’s team will manually review the project to make sure it complies with their rules.

On the other hand, Indiegogo allows the posting of personal projects, charity and non-tangible products and more.

Here’s an Infographic comparing them.

Needless to say, they are similar to one another only by the concept.

Did we miss something?  Come on! Tell us what you think of our guide on How does Kickstarter Work & Make Money in the comments section.

Bharath Sivakumar
Started out to become a Developer but felt at home expressing myself via writing. The journey started from a single novel. Been a writer since schooling days. Interested in coding, reading and movies.
Recent Posts

Fear Of Missing Out | Your Guide To FoMO Marketing Strategies

Did you check your phone before you started reading this article? Did you browse through your social media feed? Did...