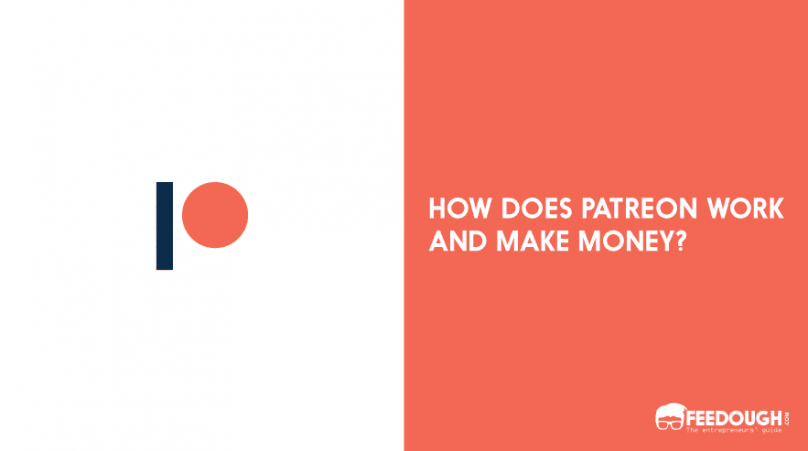 With the advent of the Internet, crowdfunding has become easier than ever. There are many sites that cater to this and has helped many ideas come to life.

The Internet has helped fund really wacky creations such as the Ostrich Pillow to even a Potato Salad.

You put out your idea to the world along with added benefits for those who back them right away. There have been a lot of iterations of this model of funding. Patreon is one such platform based upon the subscription-based crowdfunding model.

Let’s look at how it works out for everyone and it supports itself?

Patreon describes itself as a “subscription-based crowdfunding membership platform”.

Founded in 2013 by Jack Conte and Sam Yam. It all started out when Jack Conte was looking for ways to make more revenue out of his YouTube videos.

He met up with Sam Yam and soon developed a platform for paying a set amount of money every time an artist creates a work of art.

Patreon is a platform that allows fans of a creator’s work to support them by subscribing to their work and paying a subscription fee. These supporters (called patrons) help sustain and support their favourite creators in a way the creators want them to.

Creators set up pages for subscription payments from patrons by offering certain perks or incentives, and donors can pledge certain sums of money based on those tiers and perks.

The platform is not just limited to individuals. It also allows major brands to connect with and dish out discounts and exclusive offers to their followers.

Read on to understand the difference.

How Does Patreon Work?

As the portmanteau of Patron and eon suggests, Patreon works on a monthly subscription model where, instead of getting paid once per project, creators are paid either every month by their supporters (or patrons) to continue creating on an ongoing basis.

Let’s look at the tier/perk structure that one receives for pledging their support as a patron.

The rewards are set by the creators. It could be anything they think will be acknowledged and appreciated by the patrons.

Few of the commonly seen rewards include:

Take the example of YouTuber Philip DeFranco. He’s well known for his talk show, Philip DeFranco Show (PDS), where he talks about worldwide news, pop culture, and everything in between.

Here are the rewards for becoming a “patron” that are specified by him: 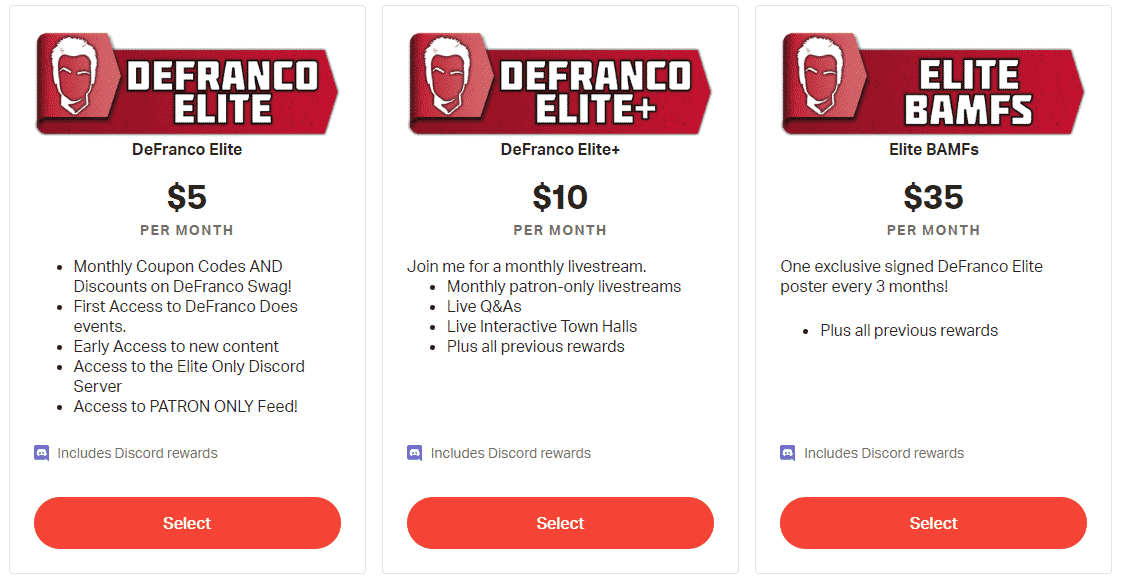 Such an operating model where the creator can create his own community and ask for the money he thinks he deserves was never offered before. Platforms like Youtube, Netflix, Spotify, etc. work on their own terms and can remove your work or demonetize the creators whenever they like. Patreon creates a sustainable revenue source for them which they can rely on.

The business model even proves to be worthy by the patrons as they get to contribute to their favourite creators directly and in a way most desirable by them. Plus, they get exclusive benefits which other followers don’t.

How Does Patreon Make Money?

Patreon’s method of supporting itself is simple.

Patreon pays 90% of the amount pledged by the patrons to the creators. The company charges a 10% cut which is categorized into 5% for using the platform and a 5% as processing fees.

Now that may not be too much. But the volume and scale of the transactions are what allow for it to not only sustain itself but make profits. (There are currently more than 3 million patrons supporting more than 100,000 creators on Patreon each month.) 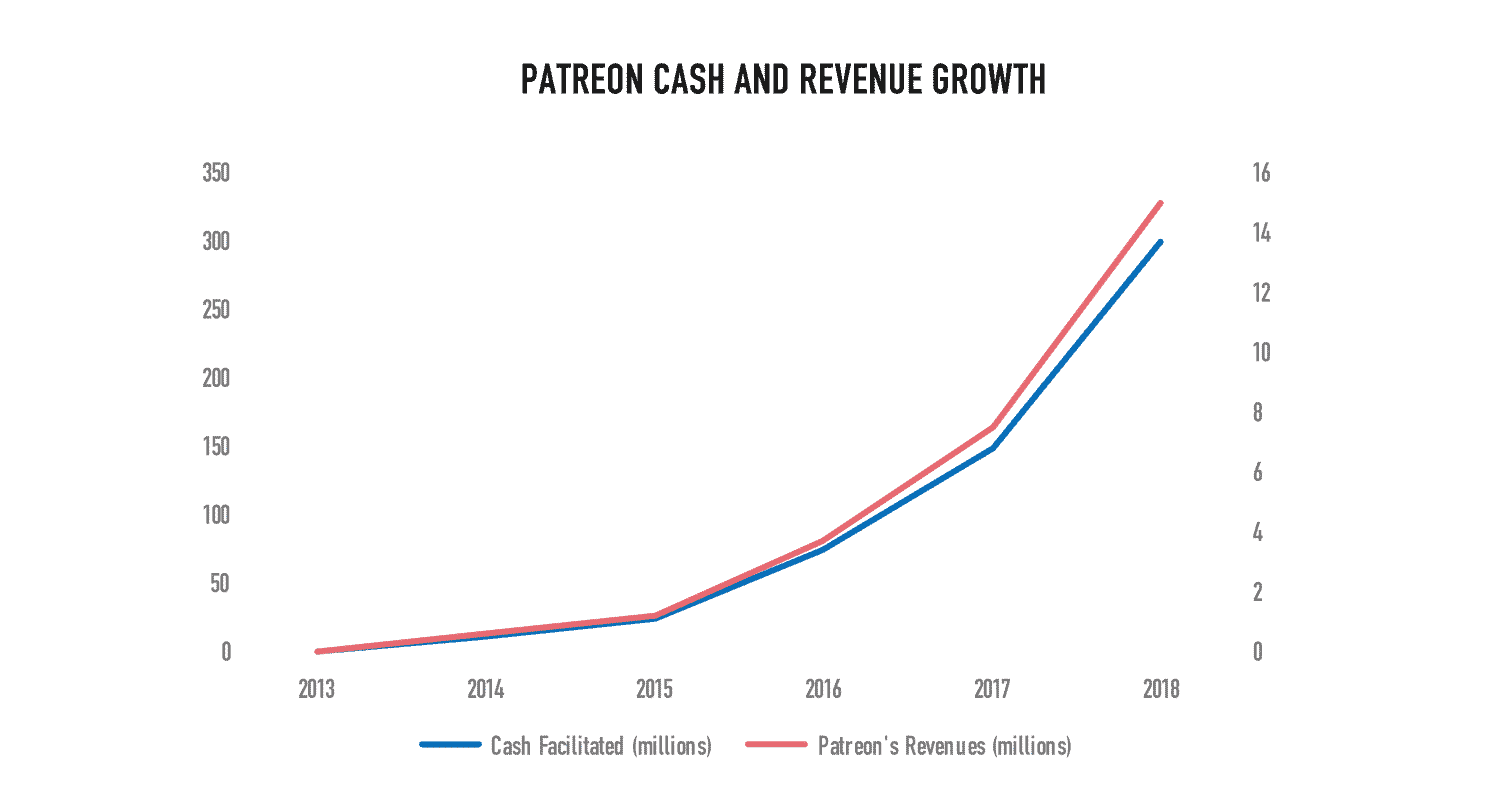 According to Patreon’s CEO, Jack Conte, the company is on track to pay out $500 million to content creators in 2019. Back in May 2018,  he said in a video that they would process $300 million in payments that year, implying roughly $30 million in revenue for 2018. That was twice the $150 million they processed in 2017. This statistic proves that the company has moved ahead of being a startup to being a scaleup with a lot of opportunities ahead.

The company is still building its revenue model and is looking for ways to cut down the 90% payout model.

Currently, there are no contracts between the company and the creator, and the creator gets to retain 100 per cent ownership of their work and get to control and promote their brand as they want. Patreon has plans to provide the creators with some new “value services” which will bring down this 90% payout model to a percentage where Patreon makes more profits.

How Has Patreon Disrupted The Market?

Patreon gives the power of control back into the hands of the creators and its users. It allows for greater flexibility for the creators.

You see, sites like YouTube have certain rules and regulations in place. The corporation gets decides on whether their content is good enough to be published or not.

This also means that it can get demonetized at any time. There is also the chance of them closing their business.

The creators are at the mercy of these corporations.

When you phrase it like this, it may sound harsh. However, it’s the cold hard truth right there.

Patreon helps fund their projects without all the variables mentioned looming over their shoulders. Patreon allows for them to create at their own pace.

It helps them fund their projects. In return for the patrons support, they get the benefits, rewards and bonuses that are set in place by the creators.

It is up to the creators to set up what the patrons get for pledging their support. This allows for really innovative, useful and concepts of rewards.

It also helps Patreon in the fact that it can help fund many ideas that you could generally not do so either via crowdfunding or donations; They could be:

Moreover, with Article 13 coming into effect, things have changed drastically in the Online content creation space.

It is messing with the way various platforms operate, especially YouTube, creators and brands are looking for ways to make sure they are not affected by this.

Creators are trying to be more diverse and not trying to rely on only one platform for all their revenue.

Patreon helps in them being able to create a stable revenue source.

Patreon entered the market at the right time, with the right mindset and targeted the target audience. The company was able to change the trend with the help of its disruptive business model.

All of this allowed for Patreon to grow and become a source of steady revenue for the work of creators.

Did we miss something?  Come on! Tell us what you think about our article on How Does Patreon Work & Make Money in the comments section.