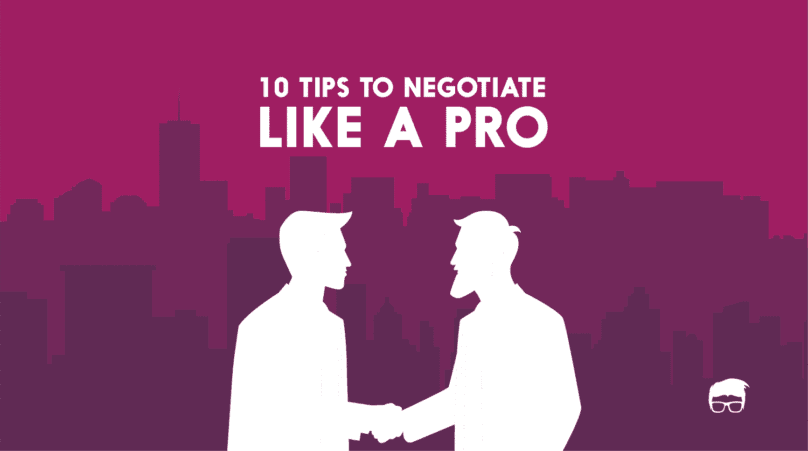 Let’s accept it, no matter how hard you try, there are times when you fail to convince the other party. But here are some tips and tactics you could use for better negotiations in future.

A psychological research suggests that most of the times, negotiators who make the first bid have an upper hand over the other party.

It’s all about setting that anchor which will influence the rest of the negotiation.

Another research into human judgement has found that the perception of a particular offer is highly influenced by any number that enters the negotiation environment. This relevant number is called anchor as they pull judgements towards themselves.

Setting an anchor plays a very important role in the negotiations. Even when the people know that the anchor should not influence their decisions, they usually fail to resist its influence.

Never expect the buyer to choose anything other than the smallest value (or even a lesser number) and the seller to choose anything other than the largest value (or more than that) when you offer them to choose from a price range. Setting a range when you’re the seller gives an expression that the more you charge from the lowest value, the more profit you’ll earn. Hence, the customer will try to set the price as close to the smallest value as possible.

If you aren’t sure about the final price, take your time but never set a range.

When bidding first, set an anchor you can afford to deviate from as the other party will always try to bring the said amount down no matter what. That is, if you’re aiming to close the offer at $100, bid for $130. This will not only benefit you but will respect other person’s negotiation efforts who’ll try to bring down the price.

The higher the anchor, the higher the chances of more profit. But make sure this aggressive pricing is not absurd. Absurdly high anchors may end the negotiation before even starting.

Make Sure To Listen To The Other Party’s Offer

Always listen to the other party’s offer. The best way to win the negotiation is to listen to their offer and mould it to your advantage.

Let people talk and give you as much information as they can. This not only benefits you when you’re in a position where you know better but also when you don’t have enough facts to hold a negotiation. Plus, the other party doesn’t feel disrespected as well.

Use Silence As A Tool

Silence plays a great role during negotiations. It helps you gain much more information than you would have gained while speaking. If the other party outrightly rejects your offer, it’s suggested to keep quiet than to reply instantly as it’ll create a void and the other party will start talking again with more clarification to fill the silence. They may even list the reasons to reject your order or even place their own offer on the table.

It is not necessary to close the deal at the same time of the negotiations. It is suggested to consult other beneficiaries of the business and to take their advice. This not only gives you more time to rethink but help you to make a clearer decision.

Never get too emotional

A good negotiator is someone who doesn’t get emotional and knows how to tackle emotional triggers. Loud, bold, and emotional statements are bullying tactics or a sign of insecurity which can be capitalized on by the other party or may end the negotiation.

Also, don’t get too emotional about your offer as well. Loud emotions and actions like anger, distaste, blaming etc. doesn’t work in your favour as they overpower the facts and even hinders your ability to overcome conflict and reach an agreement. You may even reject a favourable proposal just because you’re angry at the other person.

If you want more concessions, reciprocate! Bilateral contracts always create win-win situations for both the parties involved. You should not give something without getting something in return. Attach the strings and it’ll lead to better results which are in your favour.

Negotiations Are Not A Competition

Nobody wins or loses a negotiation. You should always focus more on cracking the most profitable deal than negating the other party’s offer just because you want to win over them. Negotiations should aim at building a healthy business relationship between two parties.

A win-win business deal always benefits the business in the long run.

Did we miss something?  Come on! Tell us what you think about our article on how to negotiate in the comments section.