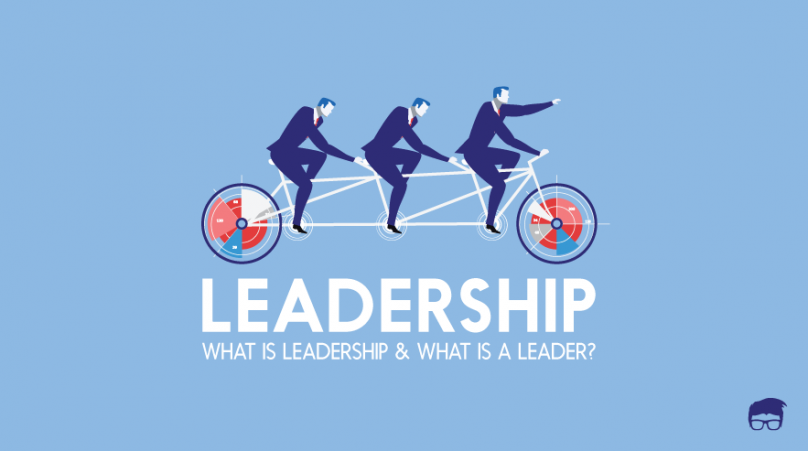 Are leaders born or made?

A study by the University of Illinois suggests that 30% of leadership ability is genetic and 70% of the leadership skills are to be developed or made.

To be able to give a better answer to the above question, let us try to understand what leadership is and what it takes to be a good leader.

Leadership is the process of social influence to motivate people to achieve a shared set of objectives.

The two key phrases to note here are-

There is a need for leadership in almost all walks of like; not only in political or business scenarios but also at homes. This being said, it becomes important to know who is a leader and what characteristics a good leader possesses.

Who Is A Leader?

A leader is a person who takes the responsibility of leading a group of people or an organisation towards the accomplishment of a vision.

Characteristics Of A Good Leader

Practically, there is no perfect structure that explains how to be a good leader, but there are some basic characteristics that a good leader may project:

Importance Of Leadership In Organisations

Leadership plays a vital role in organisations. Be it leadership at the senior most level or at the team level. Some reasons why leadership is important are:

There are different leadership styles to suit different situations. Leadership can be categorised into the following styles:

Some characteristics of a transformational leader are:

Transformational leadership is best suited for organisations that are looking to transform their brand image or bring about new innovative solutions into untapped markets.

Steve Jobs is one example of a transformational leader. He had a vision for Apple which was worked upon by the employees of Apple. He promoted innovation which lead to delivery of creative solutions by the employees.

Listed below are some characteristics of a transactional leader are:

When an organisation is looking at increasing everyday efficiency of its team with consistent reporting, transactional leadership seems to be the best fit.

Bill Gates is one example of a transactional leader. It is said that he used to visit the product teams to make sure that the teams were on track with their activities and used to ask them questions until he was satisfied that the team is working correctly.

Charismatic leaders may have the following characteristics:

Political leaders like Barack Obama and Narendra Modi are examples of people with charismatic leadership style. They connect with their followers on an emotional level and communicate their message in a very persuasive way.

As the name suggests, democratic leadership style practices democracy. All the decisions are made after taking into consideration all team members inputs. Though the power of decision making lies with the leader, but he or she takes into account what their team members have to say. Such a style of leadership promotes freedom of expression in the team and encourages the team members to be vocal about their opinions.

Here is a list of characteristics that a democratic leader may possess:

A team that is made up of members who are opinionated and believe in team work can be best supported by adapting to democratic leadership style.

A jazz band portrays the democratic leadership style perfectly. Even though the band often lead by a conductor or bandleader who is responsible to ensemble various sounds and harmonies into one cohesive production, there are certain sections where each musician gets the freedom to improvise and show off their creative side.

Bureaucratic style of leadership is the one in which leaders generally tend to not accept ideas that are non-traditional. Bureaucratic leaders, just like democratic leaders, listen to their team member’s opinions and views but tend to reject anything that does not seem to be in alignment with a set guideline. Such a leadership style may lead to a lack of creativity in the team.

A leader with a bureaucratic leadership style may demonstrate the following characteristics:

An organisation that wants to work as per the set rules, is resilient to change and follows a strict hierarchy can be effectively led by bureaucratic leaders.

Characteristics of a Laissez-Faire leader may be:

This style of leadership when followed with employees that are self-motivated and self-starters would work best. But if adopted for employees that are complacent and need a push to do tasks, it could lead to the downfall of the team.

Warren Buffet is a famous example of a Laissez-Faire leader. He is believed to leave his team to work on its own and achieve results. He gets the resources managed by making investments and leaves it to his managers to achieve goals.

Some people are born leaders. But, it does not mean leaders cannot be made. Behavioural theories believe that leaders can be made by learning and observing various leaders and their leadership styles. One can always learn and practice the skills to be a leader. A notable point here is that it is important to match the right leadership style with the right situation for effective and quantifiable results.

Did we miss something?  Come on! Tell us what you think about our article on what is leadership in the comments section.

Mountain lover, adventure seeker and a startup enthusiast.
Learning from experiences is my way of life.

What Is Leadership? - Importance and Styles