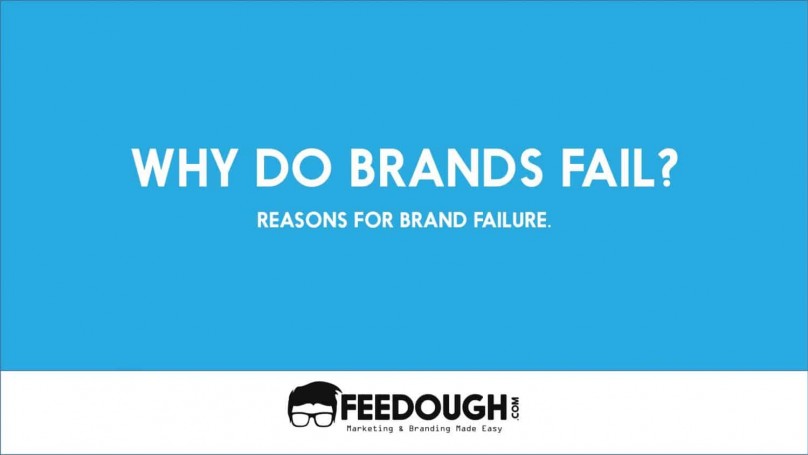 The process of branding was developed to act as a guard for businesses against failures. Branding enforces ownership and differentiation. It all started in the 1500s when unique marks were used to specify the ownership of the cattle. Different marks were used by different people to differentiate their cattle from others. The definition of the brand has broadened quite a bit since then. Branding, today, isn’t just used for identification and plays a lot more part in the company’s success or brand failure than it used to some years before.

‘Today most products are bought, not sold’  – Al and Laura Ries

Gone are the days when products used to be everything for a company. People, today, buy a brand. There truly isn’t much difference among the products sold in the market. It’s the brand that makes the difference and makes the purchase decision easy for the customer.

Brand success and brand failure both depend on the brand-consumer bond, brand image, brand promise and brand positioning as it’s the customer who decides the fate of a brand. Bonds, once established, results in emotions being attached and a perception developed about the brand. This bond when distorted leads to a distorted perception of either the brand (brand failure), the competition or the market (if it’s a new market).

Position Amnesia is when a brand forgets what it is and what it stands for and tries to experiment with its identity and positioning to an extent that it takes a totally different route. This route could result in that brand’s failure as it might not be congruent to the existing image and positioning of the brand.

Example of brand failure due to Position Amnesia

One of the perfect examples of “Brand is as important as the product” theory.

With over a billion drinks sold every day, Coca Cola is surely one of the most loved brands in the world. But it also committed one of the biggest marketing blunders of all time. In the late 1970s and early 1980s, it was evident that Pepsi had better marketing campaigns planned to win the first position from Coca Cola. Many successful campaigns like “Pepsi Challenge” and “Pepsi Generation” made it clear that people preferred Pepsi’s taste over Coca Cola. Hence Coca Cola, instead of modifying their marketing strategies, saw the only solution to this problem as the introduction of the ‘New Coke’ with better and improved taste.

By launching New Coke, Coca-Cola contradicted its previous marketing efforts where it spent more than 50 years to attach an emotion (happiness) to their original product. This being the only reason the new coke was boycotted and the company was left with no option but to bring back the original product. Sometimes, one of the most successful companies face the biggest brand failures because of their strengths and past victories, which resulted in over-confidence and lulled them into complacency that they feel reluctant in trying new strategies and sometimes even don’t even care about their current and prospective competitors.

The Icarus Paradox refers to a Greek Tale of Icarus who burnt his feathers after flying too close to the Sun, even though he was warned against it.

Similarly, many big companies often burn their wings because of their overconfidence and extensive and unscientific use of some rule of thumb strategies (which helped them to reach the top).

Example of brand failure due to Icarus paradox (Overconfidence)

Kellogg’s initial foray into the Indian market is generally agreed to have been a failure. Despite a high profile launch in 1994, consumers were not interested to repeat the purchase of Kellogs products. This brand failure shows the signs of Icarus Paradox as When the marketing strategies are built to cover up the reality, the brand doesn’t last very long. It’s true that not everything can be told to the consumers but the product has to compliment the brand promise or the company could get a great fall. Deception, at today’s digital age, would no longer result in the success of a brand as the consumers are much aware of the current scenarios and, with an increase in competition, aren’t hesitant to switch over to a new brand. Such strategies may result in a decrease in brand equity and also affect the brand image of the business.

Example of brand failure due to Deception

Until 2015, the brand best known for reliability, performance and environmental credential, Volkswagen was trusted by millions worldwide. But as soon as the truth about 11 million of its vehicle being equipped with a software program to dupe emissions testing was out, there was no looking back. The deceptive brand promise had made the brand fall to such a level that it now not only faces a £30bn lawsuit but a monumental battle to rebuild trust among consumers. The environment in which the brand functions is dynamic and requires it to change its marketing and branding strategies from time to time to keep up with the trend and to maintain and gain new consumers. In this age of the digital world, if a brand still sticks with print media, it surely lags behind many of its competitors. Similarly, if a brand fails to infer the current and future needs, wants, and desires of the customers, there are greater chances that it may lose to its competitors.

Example of brand failure due to Lack of Change

Nokia sat on a wall, Nokia had a great fall.

This is the actual story of a brand which was once a market leader in the mobile phones industry.  Today, it has just three percent of the global smartphone market(which is a fifth of what it was in 2007). Nokia had great research and innovation, the only place where it lagged behind was marketing. Nokia had a set of best hardware engineers but it overlooked the fact that the consumer preference was shifting from hardware to more of software. Hence, Apple (ios) and other companies like Samsung (Android) were able to crush Nokia and succeed in a comparatively short span of time. Sometimes, a successful brand, because of its ego, may get a feeling of megalomania and plans to spread its hands in every possible product category. This strategy might not work for every brand. Even Amazon faced losses when it launched its fire range of phones.

Example of brand failure due to Brand Ego

Cosmopolitan is the world’s most popular international women magazine. But this famous magazine, out of its brand ego, launched some edible products like Yogurt and fresh cheese in 1999 and predicted it to be an instant success because of the existing image of the brand. Any form of marketing, advertising, and promotion to spread the awareness was also refused by the management. These products remained in the market for more than a year but were removed as the brand concluded that they should stick with what they’re good at. This is the opposite of brand ego and occurs when a brand faces too much competition or starts to lose much of its market share. This condition is characterized by the reinvention of brand strategies in short spans of time, imitation of competition, and distorted public relations.

Example of brand failure due to Brand Paranoia

Blackberry was one of the market leaders in 2007, just before when the iPhone was launched. BlackBerry didn’t consider the iPhone to be a competitor initially, perceiving it to be an enhanced mobile phone with playful features targeted at younger consumers. This was where Blackberry went wrong. iPhone turned out to be an instant hit and started to eat much market share of blackberry as it appealed to business professionals as well.

Blackberry, afraid of this new competition, did release a touchscreen smartphone – Storm. But this impulsive move was focused just to curb the competition wasn’t backed up with research and innovation. Hence, the company received many complaints about the device’s performance. This put even more pressure on the company and it started to lose most of its market share to the competition. Blackberry did try to come back with the launch of its playbook, but it had already lost most of its brand equity till 2010, and playbook turned out to be a failure due to its high-price, low-feature, and low-performance.

Other symptoms of brand paranoia can be seen in the 17 different acquisitions by blackberry to add features and improve offerings through its products, none of which worked out.

Did we miss something?  Come on! Tell us what you think about our article on brand failure in the comments section.