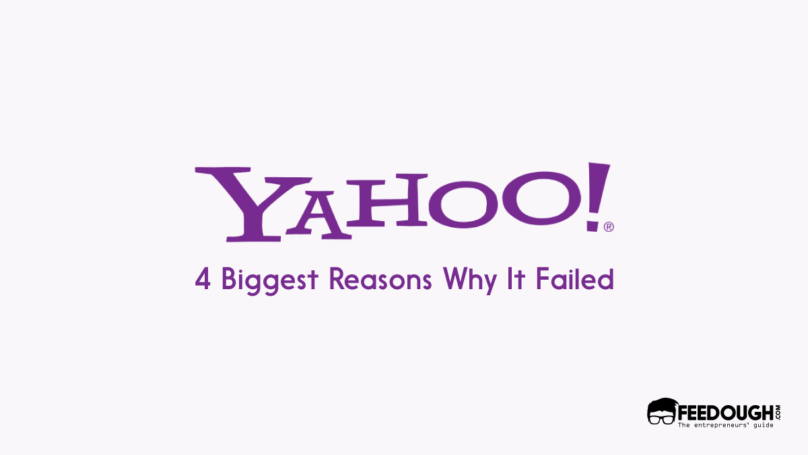 If you want to know anything about Yahoo!, you’d probably google it.

But did you know that there was a time when Yahoo! refused to acquire Google twice?

Founded by Jerry Yang and David Filo in 1994, it was a veritable web titan and one of the pioneers of the early Internet area in the 1990s.

From being the most visited site globally, and once worth a whopping $125 billion, to being acquired by Verizon for less than 4% of that amount, that is $4.48 billion, Yahoo! has seen its downfall.

So what happened that led to such a turn of events? Why Yahoo! failed? Can a business learn anything from its downfall? What could have gone so wrong in all these years that it led to the dissolution of the company?

The reasons are multifold. Two missed opportunities of acquiring google, a 500 million users’ data breach, a failed bid to acquire Facebook, and what not!

Let us demystify the different factors that accumulated together, eventually leading to this tech giant’s downfall!

Yahoo! is a web service provider that offers different services that include a search engine, a web portal, e-mails, news, songs, and other related services.

A backronym for ‘Yet Another Hierarchically Organized Oracle’, it ushered in the new internet era and put together a multipurpose website that had skyrocketing popularity. It had then purchased Yahoo! Broadcast for around 6 billion dollars which is similar to present-day YouTube. Way before Spotify and YouTube Music even existed, Yahoo! Music let people listen to songs at low prices. It was among the first online websites that introduced the idea of modern emailing to people via Yahoo! Mail. It also introduced other services like Yahoo! News, Yahoo! Finance and Yahoo! Sports to expand its domain further.

The Story Of Yahoo!

While the yahoo.com domain started in January 1995, Yahoo! had received around one million hits by the end of 1994 on the beta-version domain – akebono.stanford.edu/~yahoo.

Ever thought about why there is an exclamation mark in the name?

Since the word “Yahoo” had been previously trademarked for barbecue sauce, knives, and human propelled watercraft, Yang and Filo thought of adding an exclamation mark to the name.

Yahoo! grew exponentially in the 1990s and acquired a wide range of companies, and introduced numerous new features for its customers, leaving all competition behind. It garnered immense support and earned two rounds of venture capital funding before its initial public offering in 1996. Its stock price almost doubled in the late 1990s during the dot-com bubble and reached an all-time high of $118.75 in 2000. However, its stock reached an all-time low of $8.11 in 2000 when the bubble burst, even though it was among the few who still managed to survive. As the internet era evolved in the late 1990s and early 2000s, so did Yahoo!’s home page, which had become the starting point of the world wide web for millions.

Then how come GenZ has barely used Yahoo! and knows so little about it?

True to the adage, skill comes to many but vision comes to only a few; Yahoo’s success was short-lived, and it could not keep pace with the advancing trends and technology over the years.

Users started switching to other alternatives, and its market value started to depreciate over the years. Let’s see why!

Why Did Yahoo! Fail?

Yahoo’s downfall can be attributed to a string of wrong decisions and missed opportunities. Let’s delve deeper to understand the different reasons that led Yahoo! plummet down the hill.

Yahoo! had been more business-oriented instead of focussing on providing a quality user experience. It had extensive advertisements and seemed to change its user interface pretty often. It became a little difficult for its users to become accustomed to new user interfaces so frequently.

Yahoo had been unable to foresee future trends and had missed out on some big opportunities back in the day. These included –

In 1998, Larry Page and Sergey Brin, the founders of Google, had approached Yahoo to sell Google for 1 million dollars since they wanted to continue their studies further. However, Yahoo refused the offer.

But was that it?

No. In 2002, Google became way more valuable and Yahoo CEO, Terry Samuel realised its true potential. So, Yahoo offered a 3 billion dollar deal to the founders of Google. Knowing the true worth and potentials of Google, they refused to sell it for $3 billion and asked for sealing the deal for $5 billion. However, Yahoo turned down the offer again.

Although things could have been different for Google had it been acquired by Yahoo then, it was worth a whopping $1201 billion in June 2021!

At a time when Google had already come a long way in the world of online search, the new trend in vogue was that of social networking. In July 2006, Yahoo attempted to acquire Facebook for $1.1 billion. However, the deal didn’t work out and a failed bid to buy Facebook got added to the list of missed opportunities Yahoo missed back then.

Failure To Merge With Microsoft

In 2008, Microsoft approached Yahoo with an offer of $44.6 billion. However, Jerry Yang baulked at the offer. The repeated offer rejections were because Yahoo felt it was being undervalued. However, it doesn’t seem so anymore after considering its $4.48 billion acquisition deal with Verizon in 2017.

Yahoo! invested a lot of money in acquiring companies like Broadcast.com, Geocities, Flickr, Right media, Overture Services, Inc, and Tumblr, all decisions leading it one step down the hill.

Before Yahoo purchased Flickr in 2005, its founders had intended to tap into social networking. However, the plan wasn’t carried forward, and they missed out on the social media boat. There was a lack of vision, and it paid less attention to cater to the community it had built. It could not retain its customers or expand the customer base because the focus was not on introducing new features or growing the community.

In 2013, Yahoo purchased Tumblr, a microblogging and social networking site, for $1.1 billion but failed to turn the acquisition into a profit-making component. It failed to innovate, understand the right direction to head forward in, and keep pace with the competitors in the industry. So, eventually, CEO Marissa Mayer’s bet on Tumblr didn’t pan out so well.

Lack of foresightedness can be considered one of the main reasons things turned out this way for Yahoo. It failed to estimate rightly where to invest and how to head forward and keep up with the ever-changing trends and advancing technology. It lacked talented and skilled people with a strategic vision for the future.

Yahoo has faced two major data breaches, one of them being the largest one on the record!

Yahoo also faced frequent server crashes even during a time when it was at its zenith. This reduced the quality of user experience and gave users an incentive to switch to other efficient emerging alternatives that were coming up then.

There are a few key takeaways every business should keep in mind to learn from Yahoo’s failure.

Capitalise On Shifts In User Behaviour

One of the reasons Yahoo couldn’t keep up with its rivals was its incapability to carry out a successful transition to being a strong mobile competitor. Its lack of leadership in the mobile space let its competitors lead the race. It could not give high-quality mobile advertising experiences to its users and lagged behind in creating measures to check the effectiveness of its ad campaigns. This also made it difficult for Yahoo to garner the budgets of big advertisers it had courted in the past.

Even though Google has its hands on different businesses, its sole aim is to organise information about anything and everything and make it universally accessible and useful to everyone. Facebook is all about socialising and making the world more connected.

However, it seems like Yahoo had managed to become a jack of all trades but a master of none.

Have A Good Work Culture With The Best People

It is difficult to have a good work culture and comprehend the direction in which a company is driven when the leadership is inconsistent. Even though it is a subjective concept, having a strong company work culture has a role to play in the kind of employees you hire, how they work, their alignment with the company aim and the overall quality of work.

Yahoo’s ultimate fate can teach future businesses that one has to keep up-to-date with trends and advancements to stay in the game, or things might falter. If Yahoo would have had a deeper understanding of what its users needed, and a foresight vision, things might have turned out differently.

Did we miss something? Come on! Tell us what you think of this article on reasons Yahoo! failed in the comments section.

by Shrishti Mathur
X
The 10 Best Business TikTokers You Need To Follow…FeaturedIt’s no secret that TikTok has been the social media platform that everyone is addicted to. From TikTok dance and cookery videos to pranks and vlogs, …