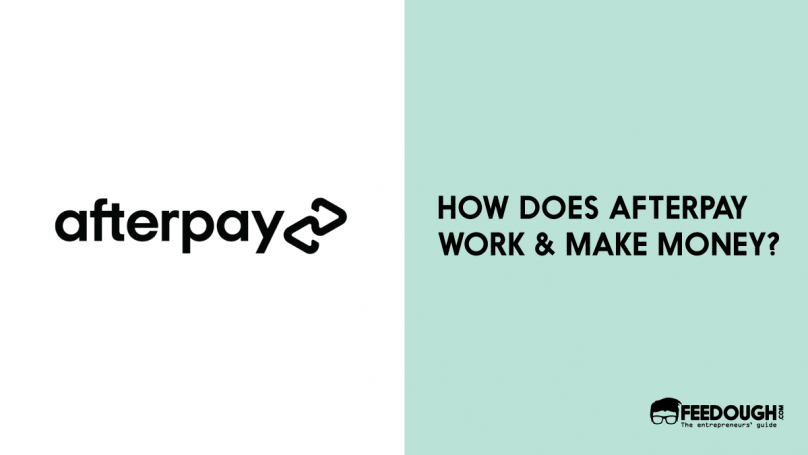 In just 5 years, Afterpay has carved its presence into Australian and international markets. This is because of the increasing number of customers adapting to its innovative interest-free payment solution that lets them buy first and pay later. With a gigantic $30+ billion market capitalisation, Afterpay has succeeded in revolutionising the “Buy Now, Pay Later” (BNPL) industry.

Afterpay’s success entails an in-depth understanding of how it delivers values, operates, and generates revenue. And in this article, we will discuss just that and demystify Afterpay business model.

Contents show
1 What is Afterpay?
2 Afterpay Business Model
3 Who are Afterpay’s customers?
4 What values does Afterpay deliver?
4.1 To Customers
4.1.1 Pay Without Interest
4.1.2 Earn Rewards
4.1.3 No Credit Check
4.2 To Partner Merchants
4.2.1 Get Paid Upfront
4.2.2 Easy Integration of Online Store
4.2.3 Higher Total Sales and AOV
4.2.4 Estimation of Payment Defaults
5 Afterpay Operating Model
5.1 What are Afterpay’s key offerings?
5.1.1 Buy Now, Pay Later
5.1.2 Pulse
5.2 Who are Afterpay’s key partners?
5.2.1 Merchant Stores
5.2.2 ecommerce and POS Platforms
5.3 Which channels does Afterpay use to deliver value to its customers?
5.4 How Afterpay maintains its relationship with its customers?
6 How does Afterpay make money?
6.1 Affiliate Commission
6.2 Late Payments
7 Final Thoughts

Afterpay is a popular “Buy Now, Pay Later” service using which the customers can buy products from its partner stores in advance and pay later in 4 separate instalments without any additional cost or interest.

Founded by Nick Molnar and Anthony Eisen in 2015, the company stepped into the limelight when the competition was less and people needed a service that could let them pay in instalments without interest. Over the years, Afterpay has merged with its technology provider – Touchcorp – and expanded its market outside Australia. In 2018, Afterpay acquired 90% of the equity in Clearpay, a UK-based BNPL service provider.

Afterpay has built its business around its flagship BNPL service.

In essence, Afterpay incentivises its customers to buy from its partner stores using its payment plan. It follows a typical commission-based affiliate marketing business model wherein a business makes money through affiliate commissions.

The company is headquartered in Australia, while its subsidiaries operate in Canada, New Zealand, the UK, and the USA, each of which follow the same affiliate marketing business model.

Who are Afterpay’s customers?

Afterpay caters to the individuals who wish to pay for their items in small instalments rather than in a lump sum.

According to Australian Financial Review (AFR), Afterpay’s “active customers more than doubled over the 2020 financial year to 9.9 million”.

In another report by AFR, it was noted that millennials constitute Afterpay’s key customer demographic (comprising 75% of all consumers).

On June 17, 2020, Afterpay published a report stating that their full attention “turns to the Gen Z customer”, and promised to expand its customer base to include Gen Z as one of their main customer demographic.

What values does Afterpay deliver?

Afterpay addressed the consumers’ needs that many payment portals previously overlooked, making it a major player in the Fintech industry. Following are the values that Afterpay delivers to its customers:

Customers can buy their favourite items from the partner stores and pay the final amount in instalments without incurring any additional interest charge. This is the primary value that Afterpay delivers to its customers.

Afterpay is known to reward its customers for a good payment history so much so that it rolled out a reward program called Pulse for on-time payments.

For instance, customers with a good repayment history can defer their first payment until two weeks after purchasing an item.

Afterpay does not report late payments and affects its customers’ credit score or credit rating. Instead, it takes other actions, including blocking the defaulter’s account until the issue is resolved.

Partner merchants enjoy a host of values by integrating their online stores with Afterpay, which are listed below:

While customers spread their payments across instalments, Afterpay pays its partner merchants the full amount upfront for each purchase.

Partner merchants can easily integrate their in-stores or online stores with Afterpay via major eCommerce and POS platforms (Magenta, Stripe, Shopify, etc.) and use its services without any hassle.

Afterpay’s sophisticated payment solution has contributed towards business growth of its partner stores as:

Afterpay constantly evaluates its customer’s payment history to assess risks of defaults or late payments. It does so by setting an individual spending limit based on several factors, including late payments, frequency of late payments and many more. In addition to that, a merchant may choose to set additional spending limitations on its products to prevent payment defaults.

Afterpay has a well-defined structure offering several products and services that help the company deliver value to its customers.

What are Afterpay’s key offerings?

Afterpay’s prime offering is its “Buy Now, Pay Later” service. But how can someone avail it?

A customer can choose to make the payment in instalments using Afterpay simply by going to the partner merchant store’s website and following the steps given below:

In short, a customer only needs to choose Afterpay as a payment option and follow the prompts for a safe and secure BNPL transaction through its platform.

Pulse is a reward program that incentivises on-time payments by providing exclusive rewards for buying responsibly and paying in time. With Pulse, a customer can:

To unlock Pulse, a US customer must make 30 or more on-time payments on orders of $40 or above within 6 months with no more than 3 late payments, and must agree with Pulse Terms USA.

Who are Afterpay’s key partners?

Afterpay has partnered with over 48,000 merchant stores to provide its “Buy Now, Pay Later” payment plan. Partner merchant stores avail this service by including it as an option in their checkout module, and having their store listed in Afterpay’s Store directory, both on website and app.

Top brands that have integrated Afterpay in their stores include Adidas, Kylie Skin, Fight Club, Goat, DSW, Bed Bath & Beyond, Ulta Beauty, Revolve, and many more.

These include many certified eCommerce and Point Of Sale (POS) systems that enable seamless integration of a merchant’s business (in-store or online) with Afterpay.

Magento, Stripe, Neto and Shopify, are a few examples of leading eCommerce platforms that have partnered with Afterpay.

Top POS platforms that have integrated Afterpay in their system include Cegid, Simple Salon, Retail Express, and many more.

Which channels does Afterpay use to deliver value to its customers?

Afterpay has its own website where it has linked the online stores of its affiliated retailers (partner merchants). It also has its application available for android and ios devices.

To avail the BNPL service, customers only have to select the Afterpay payment option at the time of checkout, and follow the instructions to consummate the transaction. In addition to that, they can redeem the benefits (if eligible) of Afterpay’s reward program – Pulse – by logging in to their account on their device.

How Afterpay maintains its relationship with its customers?

At its core, Afterpay is an automated service. Users interact with the application while making a transaction or availing the other benefits they gain in terms of exclusive offers or rewards for spending responsibly.

However, its easy-to-use interface on its dedicated website and mobile apps give a personal touch to a user’s shopping experience. A user can also subscribe to the company’s newsletter to receive store alerts, special offers and other updates on their email, laying a foundation to a deeper customer relationship.

How does Afterpay make money?

Afterpay does not charge its customers any interest or additional fees to use its service. Instead, it earns its revenue in commission from partner merchants and monetary penalties incurred by customers who pay late.

As part of its revenue model, Afterpay cultivates a paid affiliate partnership with merchants. In other words, it earns a percentage commission per transaction with the merchant whenever a customer uses its service to pay in instalments.

Afterpay charges a flat 30% affiliate commission with a variable that generally ranges from 4% to 6% per transaction. However, the exact percentage commission it makes varies from merchant to merchant.

Another revenue source for Afterpay is the penalty it imposes on its customers when they fail to make on-time payments.

As per Afterpay’s Installment Agreement – USA, the Late Fee “will be imposed, up to a maximum of $8.00 and which in no event will exceed the maximum late fee permitted by applicable state law. Additionally, the aggregate sum of Late Fees associated with a particular order will not exceed 25% of the order value at the time of purchase.”

Afterpay claims to make more money with affiliate commission than by late payments. So, to encourage on-time payments, it stops its customer from purchasing more items when they miss a payment.

After breaking into the European and the US market, Afterpay now strives to expand its operations to Asia. As per official reports, this move will be consummated with the acquisition of EmpatKali, an Asia-based BNPL company.

Afterpay has partnered with over 48,000 merchant stores over the years, integrated with multiple ecommerce and POS platforms and acquired a large customer base across borders. This clearly shows that Afterpay is dead-set on expanding its market and leaving a lasting footprint in the BNPL industry worldwide.

It makes one wonder if Afterpay has already become a popular household name in many countries in the initial five years of its operations, then where it will stand in the next 5 or 10 years.

Did we miss something? Come on! Tell us what you think about our article on Afterpay business model in the comments section.

Data science enthusiast, bibliophile, and an obsessive reader. Always down for a conversation on technology and a cup of coffee.