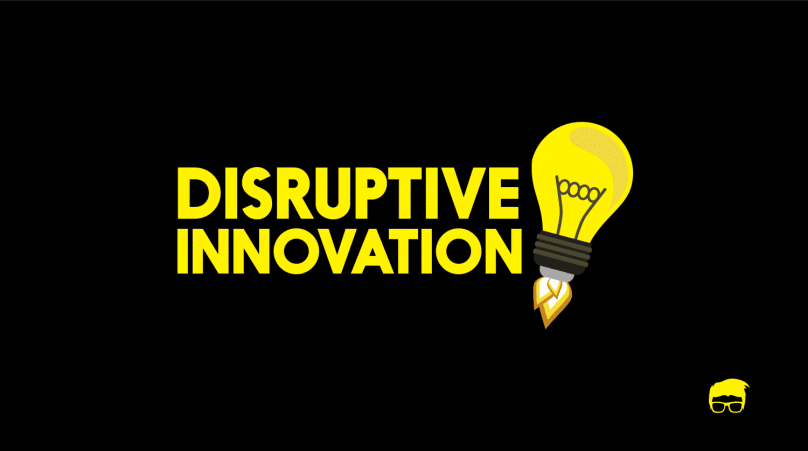 Uber. A company that turned the industry upside down with the model that they had to offer. The taxi industry was never the same again.

You see the disruption to tradition here?

What Is Disruptive Innovation?

Disruptive innovation refers to an innovation which caters to an untapped or unserved market segment and creates its own market and value network which eventually disregard the established competitors and redefines the face of the sector it operates in.

Usually, the conditions which give rise to disruptive innovation are –

Conventionally, traditional players of the market focus on improving their existing products and services for their revenue concentration points by exceeding the needs of some segments and ignoring the others. Entrants with innovation, that prove disruptive in the long run, embark their journey by targeting the parts of the business that are still unseen, untouched and untapped, gaining a grip by offering services or products that aren’t expected from the traditional. Incumbents lose their edge, because of their failure to respond to the dynamic market.

Classic disruption to industry, bringing a revolution into video content streaming market. The novel DVD-by-mail model shut the video rental business on its face and let a new format prosper. As an outsider, Netflix was able to see that the DVD business came along with its own hives of stagnation and challenges to piracy regulations. Consequently, Netflix created a business that offered affordability, accessibility and availability to extremely disloyal customers.

I don’t have to be predictable about coming up with an utter “out of the box” idea. I can innovate with how to innovate. Get it?!?

Low-end disruption encompasses ventures that occupy the base of the market pyramid and provide “satisfactory” services. This segment turns out to be a mediocre profit zone for the conventional businesses and thus, when any of the new businesses introduce themselves, the incumbents move further “upward.” In other words, they channelize their operational energies towards the relatively high risk and hence higher profit zones.

New-market disruption is about businesses that pose competition against novel products with respect to consumption in those sectors of the market that occupy lower wallet share by virtue of their demand. On the same lines as low-end disruption, the products offered here are “satisfactory” and the surfacing business turns out to be profitable at these reasonable rates.

The main fact that distinguishes between these types of disruption falls within the fact that the former focuses on well-nurtured customers and latter sticks to potential customers.

1984 to 2007, the time when Blackberry was reigning in the market with their popular launches of innovative products and services. We can see predictable inferences from the adaptive cycle of Blackberry.

Research In Motion’s secure data connection networks where exhausted and preserved, making the company the steering of the market in enterprise communication. Soon, the technology was floated and through innovation and restructuring, the product portfolio significantly revamped, even new products were launched like the Pager and consumer-centric products like the BBM messenger service. This kind of responsive attitude to the nuances of the product and the market made them an immensely valued organisation in 2007.

Soon, we saw the tables turn. Apple Inc and the iPhone.

In 2007, Apple introduced the iPhone, which Apple claims to have ‘redefined the phone’. This reinvention of an existing service as well as the product was a well-thought strategy, prepared immensely from the success of their immediate competition, who were also the largest player by way of their innovation.

Once you witnessed this introduction of the iPhone, domino’s adaption misalignment occurred for Research In Motion’s Blackberry. I can generalise the situation here, where a business stumbles in one or more phase behind from their counterparts in terms of adapting to dynamic market conditions in the domain of pioneering innovative propositions. One of the prevalent arguments is that, in a situation of pioneers and innovation, domino’s adaption misalignment causes a company to stay one step behind the immediate competition and therefore miss out on opportunities owing to first mover’s advantage, losing on market dynamics at large.

Perhaps that is why, nobody couldn’t spot Blackberry being wiped out of the market in a jiffy, just like the classic Nokia phones. All this happened because Apple redefined the innovation for a smartphone and all of the participants in the market either had to align or get kicked out. Because none could innovate past the innovation that decided the market’s fate for a considerably long time. 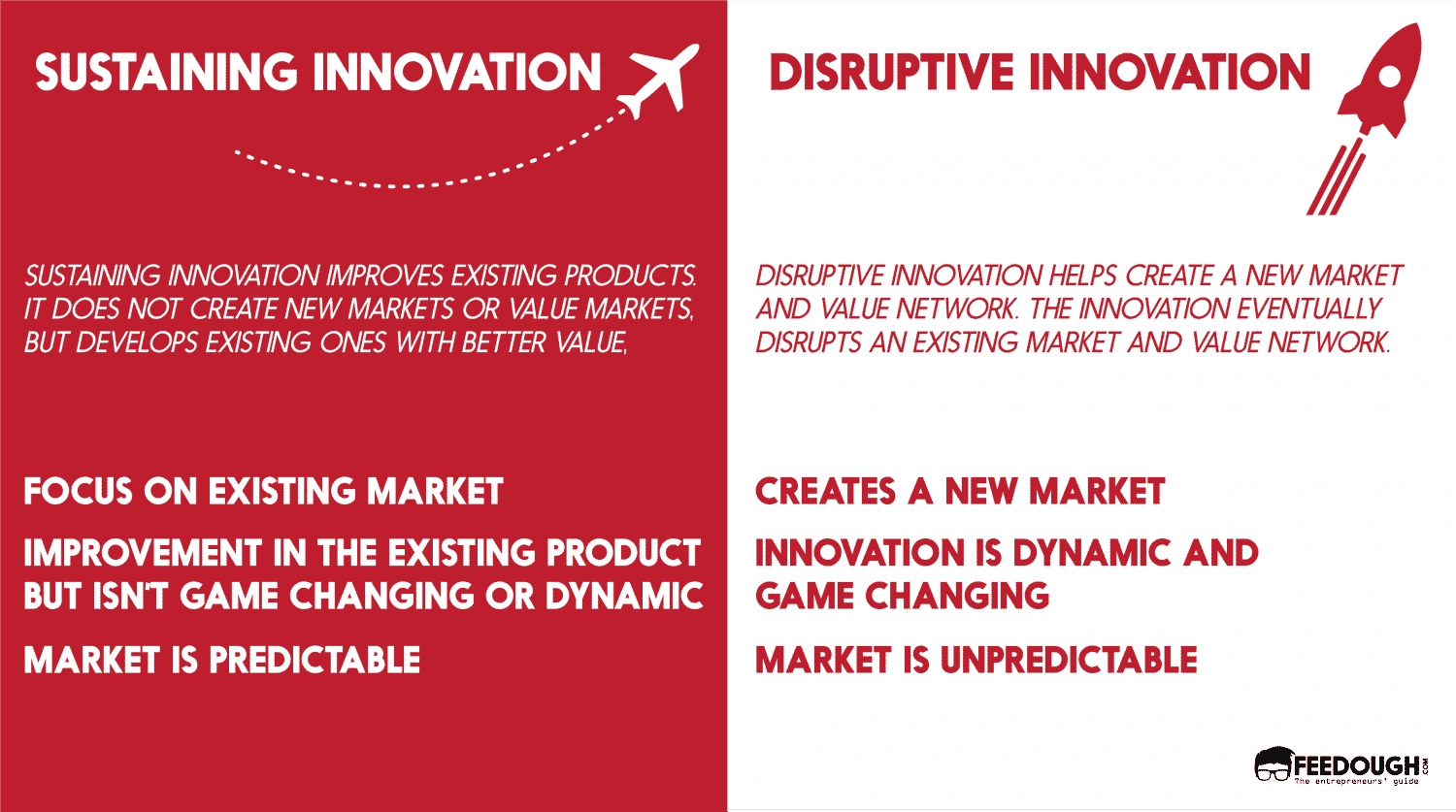 Incumbent existing players may be developing only variations of existing popular products, only to stay in the game. No business can sell on the proposition of avoiding to innovate. Hence nitpicking on own or competitor’s product, sometimes, becomes the only innovation that some businesses offer. This is sustaining innovation.

Breakout offerings are like fads, those that significantly up the game within an existing field of players and product. Remember the sleek Motorola Razr? With its significantly contemporary challenging design, it was a smashing success for Motorola’s business and image. Consumers couldn’t help but want it, redefining the existing data and understanding of market preferences. It became the most-selling line of clamshell phones overnight. Having said that, it faded only sooner because of the uproar only for the design.

More than often, you work on a disruptive innovation that gets stuck down in a system that is developed around the idea of the creation of sustainable offerings. The success of any innovative project boils down to depend relatively less on the quality of the idea and somehow more on the quality of the packaging of the idea. Blasting projects exemplify the significance of establishing different parameters and procedures in advance of each undertaking so that the organization knows the benchmarks it’s aiming for and can customize their packaging accordingly.

Risk and Reward look you into the eye. What do you do?

By personalizing the business development procedure for any potential innovation that the organization can spot, a business can provide itself with the opportunity to generate new product revenues while simultaneously exploiting future opportunities. To justify that aim, the business should categorize its new portfolio related concepts into classes from among sustaining, breakout, or disruptive. Embracing risk and reward becomes easy here.

You may seek to attain a healthy equilibrium of all three, so as to meet the needs of today and tomorrow. Your counterparts may be able to focus their innovation energies towards prioritizing the development of breakout fads and consciously minimizing disruptive opportunities.

Categorizing innovations can be an effective way to arrive at the right balance of risk and reward, for that is the sole purpose of you chasing the innovative opportunity: hold the death of the market in your hand and strangle it to life of a new market.

Let’s start with the retail industry. Is Aldi a result of disruptive innovation?

Ever since the company opened its first store in 1961, its prime focus was the low cost of the goods. The company ditched big brands, focused on local sourcing, implementing thrifty practices and disrupted the existing industry by becoming the first discounter in the world.

Did we miss something?  Come on! Tell us what you think of this article on Disruptive Innovation in the comment section.

What Is Disruptive Innovation?