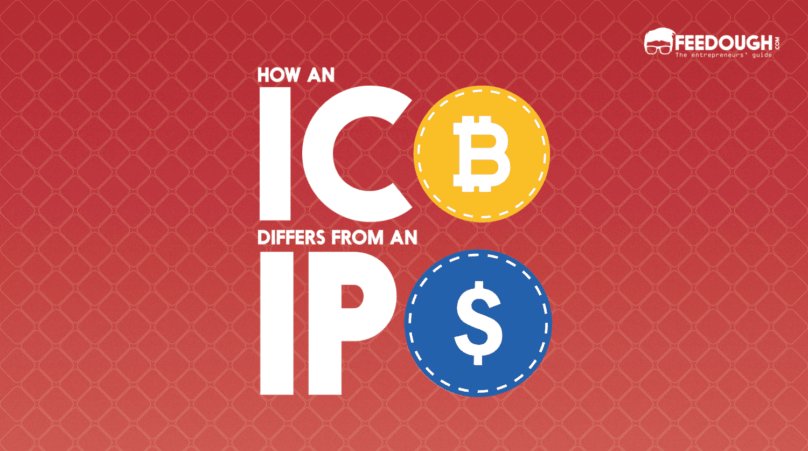 Throughout the short history of cryptocurrency, we’ve been introduced to numerous new processes and terms like decentralization, coins, tokens, altcoins, etc. One such process brought to life by the cryptocurrency revolution is the Initial Coin offering or the ICO.

An ICO is a crowdfunding strategy for startups dealing with decentralized products and services and operating on an indelible distributed ledger. It involves creation and sale of digital coins or tokens to fund the project development.

Even though the name and the objective of the ICO sound similar to one of the well-known exit strategies, the Initial Public Offering or the IPO, there are many differences between the two.

An initial public offering is a capital crowdsourcing strategy used by a privately owned company to expand and become publicly traded. The process includes several legalities and formalities to be fulfilled prior to and during the event.

The ICO as a concept is currently in its nascent stage. Nevertheless, its core objective clearly distinguishes itself from the concept of the IPO.

An ICO is an entry strategy while an IPO is an exit. That is, a startup tries to sell the project/product idea or a prototype and enter the market with the help of an ICO, while an IPO enables an established private company to expand by diluting its ownership to the public.

The second principal difference lies within what is offered at the time of the sale.

An IPO involves selling of shares or equity to the public. That is, the IPO dilutes the ownership of the founders and the people who buy the equity enjoys the ownership rights in the proportion of the shares held by them.

Whereas, an ICO involves selling either of the three types of cryptoassets – cryptocurrencies or coins, tokens, or tokenised securities. These cryptoassets are digital coupons or tokens, issued on an indelible distributed ledger, which act as the backbone of the whole project. By buying the cryptoassets, investors usually prepay for the future product or service. For example, if the project is a video game, the tokens can represent the in-game decentralized currency. The investors usually tend to invest in these assets at the time of the ICO because their price is much less than it’ll be in future. Besides the investment, these investors also may help the team in marketing and promotion in hopes of more profits. However, these cryptoassets doesn’t dilute the ownership of the founders. (Investments in ICOs which offer profit sharing or voting agreements are classified as investment contracts)

Moving on to a detailed difference between an ICO and an IPO.

An ICO is an entry strategy and is used by startups to raise funds for their project and enter the market. Hence it is done during the introduction or the nascent stage of the company and the capital raised is the working capital which is used for project development.

However, an IPO is an exit strategy and is typically staged at a later stage when the company is financially more stable but wants to expand and become publicly traded. The capital raised is the long-term capital which is used to fund company’s expansion projects.

In order to stage an IPO, a company should be listed on a stock exchange. This requirement doesn’t apply to companies holding an ICO. They usually list their cryptoassets on exchanges after successful ICOs.

All that you need for an ICO is a minimum viable product, an audited public code, and a whitepaper. An ICO can even be held without these as well.

In order to invest in an IPO, an investor has to fulfil his KYC requirements whereas in most ICOs an investor only needs a cryptoasset wallet address and an active internet connection to take part.

Stocks represent proportionate ownership of the company, voting rights, and eligibility to claim dividends. However, cryptoassets represent tokens which can be used to avail a service or to store value

IPOs are regulated by several national and international bodies like SEC in the USA, SEBI in India, etc, but ICOs are self-regulated events.

Due to the heavy regulatory processes, IPOs can take up to 4-5 months to close. ICOs, on the other hand, are dependent only on reaching the maximum hard cap or fixed sale duration which usually lasts a month.

An IPO witnesses many parties which benefit from it. These include the company, stock exchange, brokers, underwriters, and the investor. There are usually only two parties involved in an ICO.

The company spend a lot of time and involve few third parties to decide the price of the shares at the time of an IPO. Book building is used to set the price.

The price of the cryptoasset is decided according to the capital requirements of the project and the number of cryptoassets which will be released for mining or distribution.

Did we miss something?  Come on! Tell us what you think about our article on Initial Coin Offering (ICO) vs. Initial Public Offering(IPO) in the comments section.