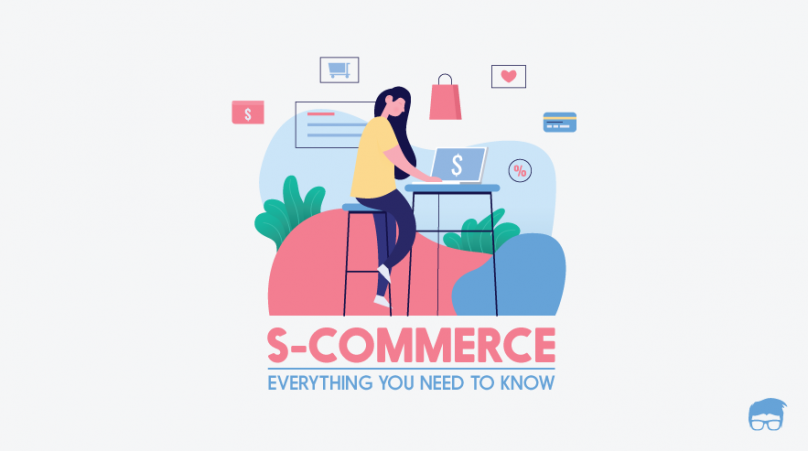 Social Commerce is a spinoff term made by combining ‘social network’ and ‘electronic commerce’. It integrates the e-commerce experience with social media. While strategies taken by different platforms may be different, the main motive is common: facilitating sales via social network.

What Is Social Commerce?

Social commerce or s-commerce is the process of using social networks as platforms for selling goods and services. This doesn’t mean just redirecting to an online marketplace but also allowing users to complete the purchase from within the social network itself.

Usually, it doesn’t need its own platforms. Instead, the implementation of S-commerce looks to add to existing social media platforms by using them as a channel for e-commerce.

While in some cases social commerce is carried by brands creating a social network like shopping platform, the most common implementation of s-commerce is the integration of e-commerce in existing social networks. And well the benefits are huge.

For a practical scenario, suppose a user browsing through their feed when they see the kit from their favourite Football club. In the usual case, the user will have to search for an online market from where this kit can be purchased from, find the kit and then make a purchase. S-commerce instead aims to make this seamless by integrating the ‘buy’ button in the feed itself and letting the user buy the kit with minimal clicks.

When Instagram added initial retail capabilities to the ‘photo and video sharing platform’ in 2015, it suddenly had a large userbase that in addition to the media sharing was also using the s-commerce platform. This is totally in contrast to some other new e-commerce platform which would need to spend enormously to gain such a userbase.

The capability of adding e-commerce as a ‘module’ in the social network reaps big rewards.

“Data is the new oil” was famously said by Clive Humby in 2006 and the reasons are evident. Serving a modern bike helmet’s ad. to a gamer would bring sales far lesser than when it is served to members of the H.O.G. Companies spend enormous resources into gathering such data. Before serving an advertisement, they want to be sure whether the user is part of a gaming legion or H.O.G.

In the case of s-commerce, a lot of data is already there. Referring to the example above, the user him/herself followed their favourite club’s page which eventually served the ad. Facebook won’t NEED to look into browsing history to know that the user is a football fan when the user is active on 4 football groups.

According to a 2015 user survey, Instagram reported that 60% of people say they discover new products on Instagram. With the knowledge of user preferences, millions of users can be served advertisements that are actually good suggestions.

Why did e-commerce become so popular when everything is already available in the markets? One big contributor to the answer to this is ‘ease’. People did find time to go to a cloth retailer on weekends and windows still had curtains before e-commerce but, being able to look at dozens of curtains while commuting and getting one at doorstep three days later is just easier and has won many preferences.

S-commerce further reduces this friction. Take the case of the Football example above. The steps of finding the right online vendor, registering/logging in and finding the same product (and variant) were taken out of the process. It just makes sense.

Bringing Curated Vendors Into One Platform

Imagining seamless integration of large e-commerce marketplaces into one platform might be a bit far-fetched right now. But s-commerce making social networks ‘curated marketplaces’ is real. While user-data makes advertisement suggestions better, feeds are heavily based on people/groups the users choose to follow.

As soon as Tom’s favourite coffee beans manufacturer, soup company and beard oil manufacturer decide to integrate business services into their Instagram pages, Tom has got a curated list of products that he likes baked right into his Instagram feed.

Not only customers but companies also get to enjoy organic traffic. Customer retention is also higher since the traffic is targeted. In addition, social networking platforms provide powerful tracking and analytics services which would be impossible for small vendors to get hands on otherwise.

Reducing the ‘friction’ of performing a task is always a big goal for better user experience. Just like reducing the friction of buying, social commerce also reduces the friction of sharing. S-commerce makes sharing and discussing a product with friends just a couple of taps away. It brings people closer to the ‘shopping with friends’ experience. Consequently, it also increases the overall engagement of the users on the platform.

Social commerce by itself isn’t anything new and most major social networking platforms have been experimenting with it in one or the other way. Most readers will be surprised to know that Facebook technically started their s-commerce journey all the way back in 2007, 3 years before Instagram was even born! Facebook, Instagram and Pinterest are the biggest facilitators of s-commerce.

Companies have come a long way and have been gradually getting successful in doing s-commerce the right way. The ‘M-commerce’ or mobile commerce (buying and selling via mobile phones) boom has magnified the response for s-commerce. Here are some visual examples of how two social media and now s-commerce giants are doing things:

Buyable pins which let users buy the pinned offerings. The transaction is carried out by Pinterest itself.

TL;DR: s-commerce is here to stay, and grow. As mentioned on this post by Instagram, every month around 130 million accounts tap on shopping posts to learn more about products while 62% of participants in a survey said they have become more interested in a brand or product after they saw it in Facebook stories. These stats explain why companies are pushing hard to better things. Facebook making ticket sales possible via the platform and Instagram testing complete checkout process from the app without any redirection are indications of where s-commerce is headed. It’s common to see retailers providing bot-integrated customer care on Facebook itself. And all this is going to go further as companies learn and technology develops (hint: AR).

Did we miss something? Come on! Tell us what you think of our article on social commerce in the comments section.

Likes to delve into anything that sparks curiosity. Interested in talking to you in articles’ comments section.