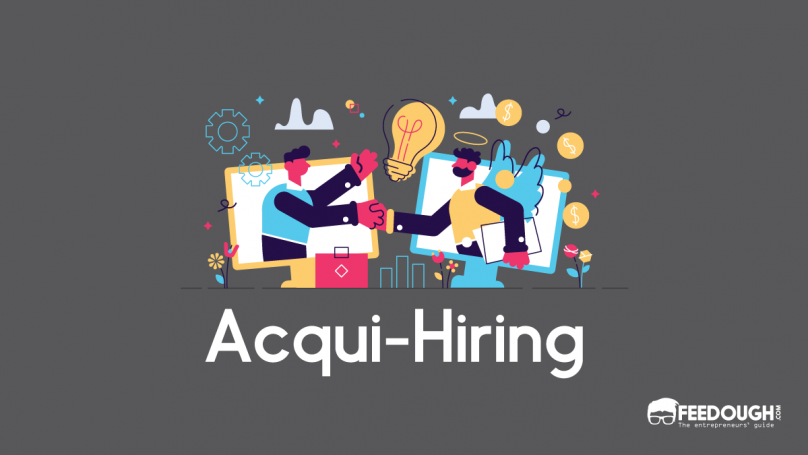 Mark Zuckerberg once said that Facebook has never bought a company for the sake of buying a company. They buy companies to hire great people.

You’re not alone if you’ve ever wondered why a tech-savvy company would bother to buy a startup with no profit and a product in a completely different field.

As the war for tech talent is intensifying, it is becoming more and more difficult for companies to attract top-notch talent. Acqui-hiring is one such strategy that changes the game and has gained popularity in recent years.

From Amazon to Microsoft, all are acqui-hiring companies that display technology talent’s expertise in AR, AI, VR, IoT, etc.

But, what is acqui-hiring? What are the possible reasons to acquihire? What are its pros and cons?

Acqui-hiring refers to buying a company or organisation mainly for its employees’ skills and proficiency rather than for its products or services.

Also known as talent acquisition, acquihiring is a portmanteau of ‘acquisition’ and ‘hiring’. Acquisition is when one company buys another, and hiring refers to taking on employees. Acqui-hiring is simply a strategy that assists the growth of the company with the expertise of recruited employees.

This term is believed to have first appeared in a blog post by Rex Hammock on May 11, 2005. He spelled it Acq-hire and characterised it as:

When a large company “purchases” a small company with no employees other than its founders, typically to obtain some special talent or a cool concept.

Google, Twitter, and Facebook have been involved in acqui-hiring for a long time. Facebook acqui-hired Drop.io and Hot Potato. Google acqui-hired DoubleClick, which revolutionised the internet advertising industry.

Acqui-hiring is a smart strategy for any organisation looking to expand its business. It is a perfect combination of talent and expertise and has several benefits that simplify solving any difficult problems.

From The Perspective Of The Acqui-Hiring Company

From The Perspective Of The Target Company

There are two sides to every coin! While acqui-hiring has proved to be a massive success, it is not without its risks.

From The Perspective Of The Acqui-Hiring Company

From the target companies’ perspective

Despite these difficulties, the advantages of acqui-hiring outweigh the drawbacks.

How Does The Acqui-Hiring Process Work?

The acqui-hiring process differs for different companies. Usually, the employees receive the bulk of the buying money and a combination of stocks or properties is traded.

The cost of an acquihire is normally determined on a per-head basis by the buyer. That is, the company pays a fixed sum for each new employee it hires. Their prior job experience and credentials determine this figure. The going rate ranges from a hundred thousand dollars per person to $2 million. Employees who are acqui-hired are given stock that vests over a 4-5 year period as well as a small cash bonus and a wage. They receive these benefits after all the team members of the acqui-hired company signs the employment contract, which includes:

If the target company has debts, then either the debt is repaid at the time of acquisition, or the employer is aware of the debts and has agreed to pay them, or the promoters will ensure that the debts are paid on their own. A contract is signed stating that the acqui-hiring company takes no responsibility for the target’s current debts.

Investors, on the other hand, usually don’t get anything out of such a deal. This is when the term deal consideration comes into play. Investors would get their money back if they own preferred stock with a liquidation preference. A liquidation preference implies that investors get some percentage of acqui-hired proceeds. This is intended to ensure that they get their money back or at least a fair return. For example, in a $2 million deal with 25% deal consideration, the investor receives only $500,000.

Investors not getting an equal share of the company’s net worth is one of the controversial issues in the startup ecosystem.

Acquiring talent is beneficial not only to an organisation’s talent pool but also in transforming an organisation’s community by bringing in innovation DNA and entrepreneurial vision. But it is not that simple as it seems to be. It’s all about using the previous firm’s ethos and absorbing the acqui-hired firm’s working style. The acqui-hired firm must accommodate, incorporate, and maintain the uncertainty as this strategy isn’t going anywhere anytime soon. Thus, both acqui-hiring companies and entrepreneurs must understand the laws and paperwork that go into an acquihire contract.

Did we miss something? Come on! Tell us what you think about our article on acqui-hiring in the comments section.

What Is Acqui-Hiring & How It Works?