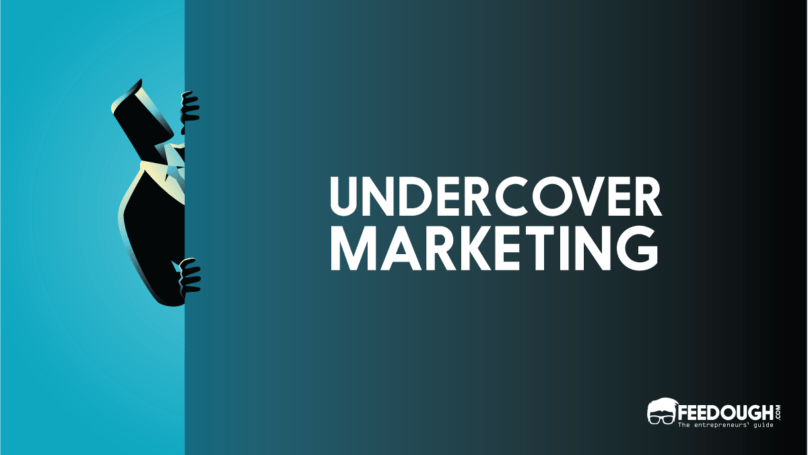 The last thing any person consuming an ice cream bar would anticipate is probably that the wooden stick turns out to be Colgate’s emulated toothbrush. It is the essence of undercover marketing, where brand awareness takes place in a way most unexpected by the consumers.

Be it product placement in movies or shows, or influencers and celebrities being paid to spark buzz about a product casually, customers barely notice these subtle tricks of undercover marketing, a technique towards which more and more companies are inclining nowadays.

What Is Undercover Marketing?

Undercover marketing or stealth marketing is a marketing strategy where a company markets their product in a subtle and ‘hidden’ way, such that the consumers don’t realise that it is a marketing ploy.

It refers to marketing and advertising products in a less obvious manner, using unconventional tactics. It is in line with the idiom “flying under the radar”. It influences consumer decisions without tipping them off the manipulation.

Undercover marketing is considered to be a subset of guerrilla marketing.

For instance, before the release of the movie ‘King Kong’, a stealth marketing campaign was unleashed wherein giant King Kong footprints were made on sandy beaches. This spectacle for the public attracted many people to take photos and post about it on social media. This created a buzz and excitement for the movie release.

Businesses usually employ four undercover marketing strategies to stand out of the crowd. These are

Stealth marketing isn’t new. It’s just not well known among the customers because it capitalises on that fact. Here are some of the most creative and innovative examples of stealth marketing strategies.

Product placement and stirring up fake controversies are ways Starbucks used to employ stealth marketing. There was a blooper of the enormously popular TV show ‘Game of thrones’ in which a Starbucks cup was evidently left on the table in one of the scenes. This helped it gain publicity and captured the attention of viewers all over the world. Starbucks also stirred up a fake controversy in 2015 about a Christmas cup which the consumers hated and wanted off the shelves. This tactic made the cup popular and raised the sales of the same.

Axe body spray made minute modifications to a common exit sign by adding customised stickers of women figures of the same kind chasing the man figure. This idea was in line with the brand’s idea of men becoming irresistible to women.

A couple wrote a blog, chronicling adventures in different Walmarts throughout the United States in 2006. The blog was very well received by the public and gained an enormous following. However, it lost its charm when it was publicised that Walmart itself sponsored it.

Blackberry executives launched an undercover marketing campaign which involved marketing their products in an unorthodox fashion wherein young women took to the city streets and asked random men to enter their phone numbers in their blackberry phones and promised to give them a call later. This was done in order to create a buzz about the new blackberry phone models to increase their sales.

Executing a successful undercover marketing campaign can be difficult to pull off. However, if done, it can help in the following ways:

Did we miss something? Come on! Tell us what you think about our article on undercover marketing in the comments section.

What Is Undercover Marketing? - Strategies & Examples