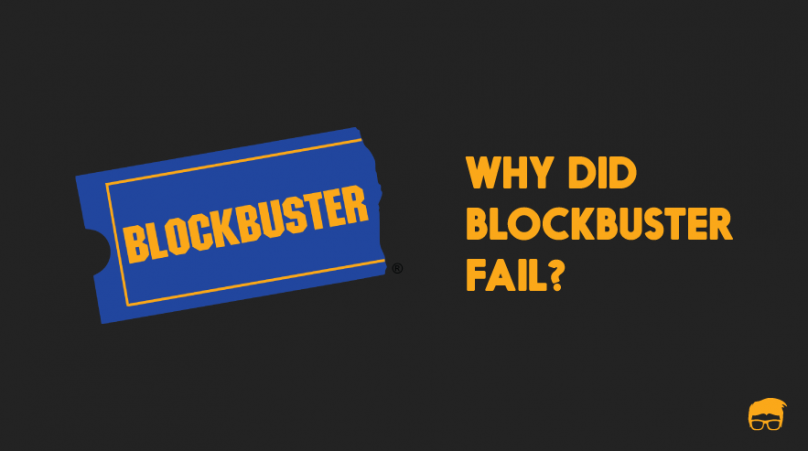 Before Netflix, there was Blockbuster.

The current situation of “stream-your-entertainment-to-your-living room” was not a thing two decades back. Blockbuster started at a time before CDs became a household staple and reigned supreme in the movie-rental industry for at least a decade or two. At its peak in 2004, Blockbuster had over 9,000 physical locations.

But, as of writing this article, the company is virtually non-existent and only one Blockbuster store remains standing.

How did it get to this?

Blockbuster was founded in October 1985 by a businessman named David Cook as a movie-rental store. The first Blockbuster store was opened in Dallas, Texas and it was a huge success.

Blockbuster’s business model was simple – Blockbuster allowed its customers to rent movies from their store for a period after which they had to return it.

Blockbuster would rent the movies until it recovered the cost spent on acquiring them, after which it would just sell the copies for full price.

The company would buy movies in bulk, allowing them to save a lot via discounts and its popularity also allowed it to strike up revenue-sharing deals with movie studios.

This enabled Blockbuster to not only provide movie rentals for cheap but also to sustain itself against local competition & stand-alone video rental businesses.

People loved the large variety and low prices offered by Blockbuster and the fact that they could pick up movies for a small price and return it once they were done watching. Not only did this allow people with less disposable income to watch movies rather than going theatres or waiting long for it to be aired on cable television, the experience of finding new movies that Blockbuster provided was unique.

Within three years from being founded, Blockbuster became the largest video rental business in the US with over 200 stores. Remember, all of this was before the internet became a household staple. This was a time when the VHS tapes were just beginning to become popular and laserdiscs were still a few years away from becoming the mainstream. Blockbuster became one of the very few options for enjoying movies, the other options being the theatres and cable television.

Blockbuster did not take long to become a multi-billion dollar company and it even branched out from movies to offer video game rentals as well as music rentals.

But, Blockbuster is nowhere to be seen today other than being referenced in movies and pop culture as a symbol of the 80s and early 90s.

How did Blockbuster go bankrupt when it seemed like nothing would go wrong for the movie-rental giant and shrink to just a single store that exists as a relic of the past?

The answer for failure of Blockbuster is not so straightforward and requires an in-depth look at how things panned out for Blockbuster. While most term Netflix to be the cause of Blockbuster’s decline, but that does not paint the entire picture here.

It can be said that Netflix played a role in the decline of Blockbuster.

Netflix began in 1997, 12 years after Blockbuster began and it operated in the same movie-rental industry as Blockbuster right from the start. What most do not know about Netflix is that it started by mailing the movie rentals right to the customer’s doorstep upon signing up for its service by paying a monthly subscription fee.

Not only that, for a fixed monthly subscription fee, Netflix also allowed customers to rent an unlimited number of movies that were then mailed to them and returning one was as simple as mailing it back.

This proved to be more convenient for most customers and made a dent in Blockbuster’s customer-numbers since they were able to not only have unlimited movies mailed to their doorstep but for the same amount as it would take for a one-time trip to a Blockbuster store.

As a matter of fact, Netflix still offers the option of mailing DVDs to your doorstep.

Also, Netflix did not beat Blockbuster by bringing movie streaming right off the bat –it was only 10 years after Netflix was founded that it bought in the option of streaming movies and other content over the internet.

It is not to be said that Blockbuster was ignorant of the rising competition nor the newer technologies that were cropping up as years passed. Blockbuster even started offering its own video-on-demand service in 2001. The service was planned to allow users to rent and watch movies right from their homes using fibre optic technology.

This service would have changed the industry just as it did with its movie rentals, had it seen the light of the day. Remember this was 7 years before Netflix brought its on-demand movie streaming service.

But it never worked out in the end since Blockbuster’s partner Enron filed for bankruptcy soon after and the technology never really worked as intended at the time. Apart from that, it was stated that obtaining large quantities of movies to make the service viable was quite harder than it had imagined it to be.

In 2000, Blockbuster declined to purchase Netflix for $50 million. This was considered to be a major misstep in Blockbuster’s decision making.

This was at a time when the internet had just become a household thing and video streaming hadn’t been introduced. Also, Blockbuster scoffed at the viability of Netflix’s subscription-based movie rental mailing service.

If Blockbuster had to compete with the convenience of Netflix, it had to change its operating model to something similar to them.

This meant that Blockbuster had to let go of a large chunk of its revenue stream – late fees. Late fees were charged to customers returning the rental copies after their rental period had ended. For Blockbuster to move onto the subscription model meant that it had to give up on an established, well-paying revenue stream and this could have made Blockbuster hesitate on switching their business model entirely.

Ironically, it had to give-in soon after and the late fees were soon removed while its operation model remained the same.

This proved to be the final nail in the coffin for Blockbuster.

In 2010, Blockbuster filed for bankruptcy and was bought by Dish Network for around $320 million in 2011. Not long after, it was decided to shut down its physical locations along with the termination of its video-on-demand service in 2015.

As of 2020, just one Blockbuster store remains – in Bend, Oregon – and this is because the place actually lacks high-speed internet, rendering streaming services unviable.

While the reasons for failure would usually lie in failing to innovate or poor management decisions, that does not entirely define the case here. Blockbuster’s decline was the result of different reasons which can be attributed to –

Blockbuster was never ignorant of Netflix or other DVD stores. Blockbuster tried its best to change its operating model but failed to do so in the end and the rest is history.

With the current over-saturation of streaming services, Blockbuster could play to the nostalgia and the sheer feeling of being able to own a physical copy with today’s consumers. While it seems very unlikely, one way would be to operate as a boutique experience on a smaller scale while being focused on providing streaming services.

Did we miss something?  Come on! Tell us what you think about our article on Why Did Blockbuster Fail in the comments section.

X
What Is Leadership? – Importance and Styles…FeaturedAre leaders born or made? A study by the University of Illinois suggests that 30% of leadership ability is genetic and 70% of the leadership skills ar…

Why Did Blockbuster Fail?

by Bharath Sivakumar
X
Why Google Glass Failed?FeaturedGoogle Glass was this new wearable device touted to be the future of wearables and the next stepping stone after smartphones in the field of personal …