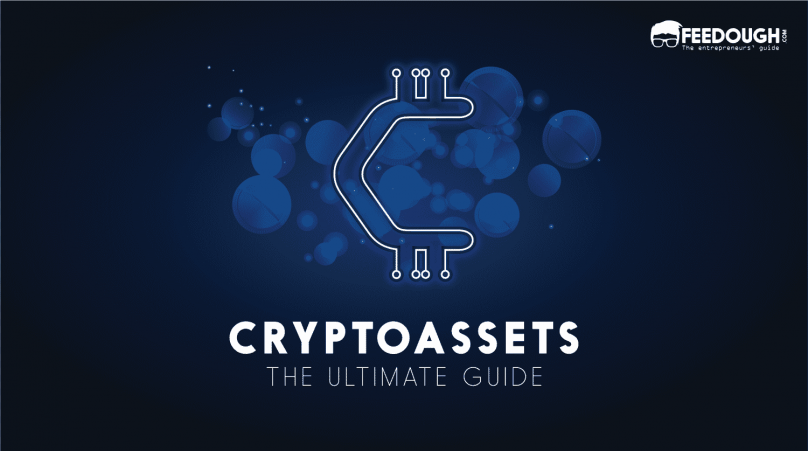 Not so long ago, there was an idea to digitize and decentralize every monetary transaction. Today’s idea is to remove every middleman and use cryptography and peer to peer networking to conduct financial transactions, file sharing, cloud computing, banking transactions, transactions among the internet of things, and creating a platform for such transactions etc.

Let’s answer all of your FAQs in this ultimate guide to cryptoassets.

Cryptoassets are digital assets that utilize cryptography, peer to peer networking, and a public ledger to regulate the generation of new units, verify the transactions, and secure the transactions without the intervention of any middleman.

Wasn’t it a cryptocurrency and not a cryptoasset?

Yes. It all started as a cryptocurrency when bitcoin was launched in 2009. But things have moved a bit forward since then.

Bitcoin was launched with an objective of becoming a new type of open and publicly accessible currency that used blockchain, cryptography, and peer to peer networking and derived its­ value from its status as a new type of money that can be sent, received, and earned through the participation in the blockchain. Its value depended on its demand and supply just like that of any currency in the global economy.

Why The Name Cryptoassets?

An asset is anything that functions as a store of value. Cryptoassets got their name for the simple reason that they can store value and can be converted into cash as and when needed. Plus, benefits can be derived from cryptoassets by holding them or using them over a period of time.

Cryptoassets are encrypted assets that use peer to peer networking and a public ledger to execute and secure the transactions.

One of the most important aspects of cryptoassets is their supply. The supply of a cryptoasset is often the determinant of its utility and value. While some have a finite total supply, many are launched with infinite total supply. But this doesn’t mean that the coin with an infinite supply will be of less value. A cryptoasset’s supply can be divided into three types:

Circulating Supply: It’s the amount of coin available at present time and circulating in the market.

Total Supply: The total supply is the amount of coins that are already in existence (whether in circulation or not)

Maximum Supply: It is the maximum amount of coin that will ever exist for a particular cryptoasset.

No matter what the algorithm is. The differentiating factor of every cryptoasset is the distributed ledger which stores every confirmed transaction. This public ledger is usually called a blockchain.

Currently, there are thousands of companies offering thousands of cryptoassets having varied utility. Monero is a digital decentralized currency that focuses on the privacy of the parties involved. Ethereum is a decentralized blockchain-based application platform that runs on smart contracts. Kodak has recently launched its cryptoasset which can be used by photographers to register their photos through blockchain. Spotify has purchased a similar technology for music licencing. Siacoin is developed with the objective of creating a network of data centres where people can offer their unused hard drive space to become a part and earn money. Steem is a blockchain-based rewards platform that uses smart media tokens (SMT) to monetize publishers’ content and grow the community.

All these cryptoassets can’t be labelled as cryptocurrencies for the simple reason that they aren’t created with a motive of replacing money. Therefore, it is important to divide them based on the characteristics they possess.

As of March 2018, there are around 1500 cryptoassets which can be divided into 4 categories according to the technical layer, use-case, value dependency, utility, and legal status. These four types of cryptoassets are:

These are the most well-known native blockchain assets with only the basic characteristics as those of a fiat currency, but are decentralized. The only purpose of these cryptoassets is to act as money or digital currency which offer a more secure and decentralized experience to the users. Most modern-day cryptocurrencies are focused on providing even a faster experience than fiat transactions.

The value of cryptocurrencies depends on:

The utility of every cryptocurrency isn’t the same. Some coins like Monero with unlimited supply and more focus on privacy tend to become an alternative to fiat currency, while other native cryptocurrencies like Bitcoin with limited supply has been and will be acting as a good investment option like Gold.

Even though many cryptocurrencies aren’t backed by the government, these are backed by the peer to peer network mining powered by millions of computers, the processing power of which is six to eight times greater than top 500 supercomputers combined.

Many countries like Venezuela and Russia have even launched their own government-backed cryptocurrencies to capitalize on the power of blockchain.

Unlike the current scenario where the information is stored on servers operated from one place and controlled by a single company, these cryptoassets use blockchain technology to build a database that is distributed among all the computers present on that blockchain. This overcomes the limitations of traditional servers as the database cannot be shut down or damaged as long as the computers are contributing to it as every transaction requires different computers to verify it to remove any inconsistency.

Cryptoassets like Ethereum add a layer of technology called smart contracts which is a computer code that must be fulfilled to complete the transaction. This lets other cryptoassets built on such platforms specify their own self-enforcing and self-executing smart contracts on the blockchain.

The value of these tokens increases with the increase of their usage by other cryptoassets as these are used to pay ‘gas’ to access the platform. There are a total of 46310 Erc20 Token Contracts (Ethereum smart contracts) as of writing this article. No wonder, Ethereum is the second most valuable cryptocurrency after Bitcoin.

Platform tokens are the most reliable set of cryptoassets. Some of the examples of platform cryptoassets are:

Utility tokens (also called protocol tokens) denotes decentralized services or units of decentralized services that can be bought, sold, and earned. Just like any real-life service token, these tokens can be exchanged for specific services like distributed storage, video game currency, etc. That is, these tokens are developed with a specific use case in mind and act as an API key that is used to access a specific service.

Suppose you plan to launch a video game that will involve the use of an in-game currency. This in-game currency can be launched as a utility token to the world at the time of an ICO to raise money for the project. Investors (future users, speculators, etc.) usually tend to invest in these assets at the time of the ICO because their price is much less than it’ll be in future.

Unlike cryptocurrencies, the utility of these tokens doesn’t depend directly on the blockchain (most of them are based on platforms like ERC20) and is directly derived from their use case.

Financial institutions and banks are still very slow when it comes to cross-border payments. They depend on years old technology facilitated by SWIFT which involves six different parties and KYC and AML requirements.

Transactional tokens are cryptoassets launched to solve this inter-border transactional problem. One of the great examples of transactional cryptoassets is Ripple. Ripple is a global real-time settlement network that connects different banks and financial institutions around the world without requiring beneficiaries or other intermediaries. It enables cross border payments within banks within seconds while providing them with an end to end visibility throughout the whole process. Take it as a platform used by banks and other financial institutions to power new payment services.

Similar transactional and payment tokens are released with more focus on individuals and corporates as their target audience. Stellar uses lumens as the facilitator of transactions, IOTA uses the internet of things to handle micropayments, Metalpay uses blockchain to transfer money across the world with just a phone number.

The payment cryptoassets can be further subdivided into two categories:

Examples Of Blockchain Based Transactional Tokens

Unlike cryptocurrencies, many of these cryptoassets don’t violate most of the Government policies and are even looked upon as a stable investment.

Internet Of Things Based Transactional Tokens

There has to be a different category for tokens operating on the internet of things as these have opened an all-new spectrum of the decentralized economy by focusing on the machine to machine transactions and microtransactions.

How this cryptoasset is different from the ones mentioned above?

Examples Of IOT Based Platform Tokens

The Potential Of Cryptoassets

Facebook is planning to launch its cryptoasset. Starbucks is trying to integrate cryptocurrencies for cashless transactions. Venezuela has launched its own national cryptocurrency. Kodak is coming back to the photo industry with the launch of KodakCoin. Spotify bought a cryptoasset startup, Mediachain, to simplify music licencing (and avoid future penalties).

Do you see what’s going on in the world?

Bitcoin may not be the next gold but cryptoassets are definitely the future. Most of the cryptoassets we know today are still in their introductory stage. Most of them are still ideas that have a lot of potential to grow. Golem is developing a supercomputer using the unused processing power of the computers of the members. IOTA plans to delve into things ranging from shoes to big machines making communication, data collection and microtransactions possible. Stellar and Ripple have revolutionized how banks conduct inter border transactions.

Will cryptoassets replace the current monetary and non-monetary system?

We don’t know. But what we know for sure is that it’ll surely become a substantial part of it. With such disruptive technology in our hands, ideas that just dreamed could become true.

Did we miss something? Come on! Tell us what you think about our article on Cryptoassets [The Ultimate Guide] in the comments section.