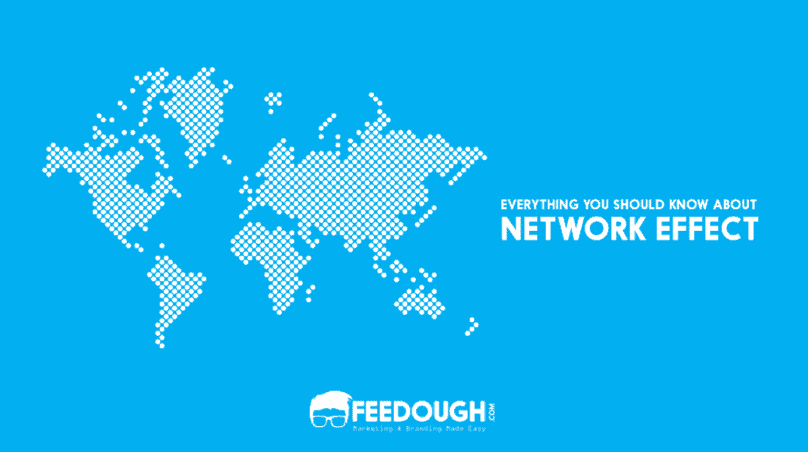 Why do companies like Facebook, Whatsapp, Instagram, Snapchat, etc rule their respective niches without any fear of their competitors? Or rather, why you don’t want to switch to a different platform than these?

It’s all because of a phenomenon called the Network Effect.

What Is Network Effect?

Precisely, more the usage of the product or the service, more is its value. The phenomenon might seem simple intuitively, but there’s more to it than you might think. The network effect works in a particular manner and is a powerful tool for certain growing businesses.

How Does The Network Effect Work?

The network effect derives its economic value from two sources –

To achieve network effect, the business has to focus on both – inherent value to get the initial users, and network value to increase its value.

Once this critical point has been achieved, the network value kicks in — the value obtained from the offering by the user is greater than or equal to the price he paid for it.

This works in a positive loop.

Every user which joins the network increases its value, which in turn, attracts more users, increasing the value of the network even more.

It can scale very rapidly.

The key to making this system work is not to focus on what happens after the loop has begun but before it. After the network effect starts working its magic, there’s not much needed to get more users. The challenge lies in getting users to join in before the critical mass is hit.

For some, even the sustainable method works well wherein their offering is valuable and disruptive enough, if not for all, at least for early adopters to start using. This is more efficient and effective as the product works for itself and it provides good fruit later on in the business. Then, as the number of users increases, it will get a wider user base.

However, caution must be taken to issues like congestion or saturation. As the network effect scales, the network itself can get overloaded. This will stop the uptake. Congestion is caused by overuse.

The telephone network is a good example – the more people have phones, the more valuable it becomes. Another example is online games which become more valuable with more participation of gamers.

Also called the cross-side network effect, the indirect network effect is a phenomenon where an increased usage of one product leads to an increased value of a complementary product or the network, which in turn, adds value to the original product.

A two-sided market has two distinct user groups. Take Amazon for example. The company is a middleman that connects sellers to buyers and vice-versa. Such companies experience a two-sided network effect.

The reason Facebook rose to the top and is still at the top is because it understood the importance of network effect for the business.

The platform provided a high intrinsic value to the users who wanted something smoother than Myspace, Orkut, and other other complicated and heavy social media platforms.

Once on board, the users did the rest. They referred their network to try the platform because of the Facebook’s intrinsic business model which promoted better experience with more users on board.

As the years passed, many competitions came to the market but Facebook’s position was untouched because no other company today has as big a network as Facebook. Users are hesitant to try a new network as they think their network won’t get to a new network as it is already comfortable with Facebook.

The company also makes sure that it adds any new feature that’s in the market to its platform so as to not even let its users try the new platform.

I think that network effects shouldn’t be underestimated with what we do as well.

WhatsApp, even though started as a status application, soon became the number one internet messaging application surpassing Facebook Messenger. The company invited the critical mass by acting as a great alternative to the then famous SMS messaging, and waiving off its joining fee.

This free alternative saved a lot of costs of the users which made them refer others on it automatically. Once on board, the network effect kicked in which proved to be a shield of WhatsApp against any competitor that tried to copy its business model.

The network effect is a really powerful technique for a successful business. All the great entrepreneurs that used this in their business strategies scaled to unimaginable heights. In this generation, where almost everything is dependent on technology and media, using the network effect is rather simple and genius. All you require is to have the next big idea, and with this effect in your favour, you too can become the next big success story.

Did we miss something?  Come on! Tell us what you think about our article on Network Effect in the comments section.

X
The Psychology of Ownership in MarketingFeaturedEver wondered why children are so unwilling to exchange their toys for new ones but are willing to grab a new one without exchange? Why you prefer tha…

What Is Network Effect? Why Is It Valuable?

by Arieez Dutta
X
What Makes Something Go Viral? The Psychology Of Virality…FeaturedThe internet is a tough place if you don’t know its rules. Is there anyone who wants to languish in utter oblivion? I guess not. Most content creators…