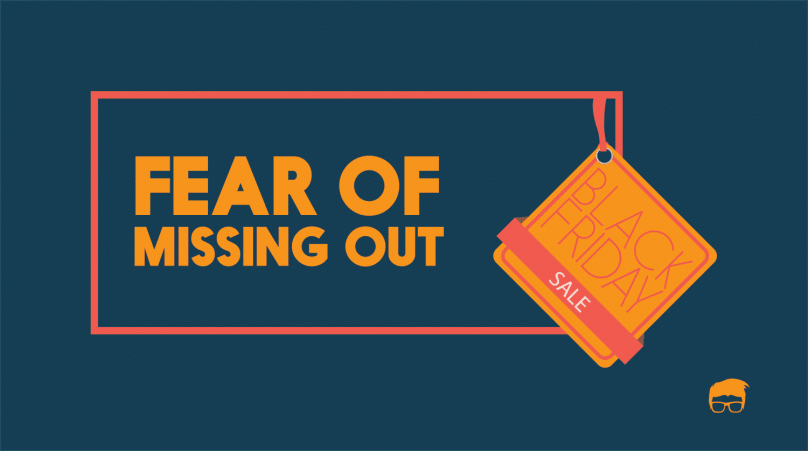 Did you check your phone before you started reading this article? Did you browse through your social media feed? Did you enquire about the score? Did you visit the new café everyone was talking about? Did you try the new camera app which makes your face look like a dog’s?

Do you know about the fear of missing out?

Because even if you don’t, there is a possibility that you might suffer from it in one form or another.

Spoiler alert: even your target audience suffers from it. You just need to use the right trigger to capitalize on it.

What is Fear Of Missing Out (FoMO)?

Fear of missing out is a fear or anxiety that something interesting or exciting may be happening somewhere which leads to a compulsive desire to experience it or be there, motivated not by what you’ll gain but by what you’ll probably lose.

FoMO is a social anxiety characterized by a want to know and stay connected with what others are doing and what’s happening around you.

The term was coined in 2004 by Patrick J. McGinnis in an article in an Harvard Business School’s magazine, The Harbus. However, the phenomenon is as old as the word of mouth marketing. Just like today, the fear of missing out was earlier triggered by word of mouth, newspapers and other media outlets. Social media is just a catalyst today.

What Causes Fear Of Missing Out?

People who suffer from the fear of missing out doesn’t always know what exactly they might be missing, but it’s the apprehension that they might miss out something important, interesting, or exciting and will be left out or out of touch with experiences and interactions.

It isn’t what you’ll gain, it’s the fear of loss, sadness, anxiety, inferiority, etc. which you’ll have to suffer in future that causes the fear of missing out.

Haven’t you tried the new app yet? Now you can’t be a part of your friends’ conversations.

Were you late to buy the phone during a flash sale? Your friends who bought it got a chance to flaunt.

You don’t know about Facebook? Are you a caveman?

Your target market is as prone to the fear of missing out as you are. They check their phones when they get a notification, check their social media feed regularly, read newspaper, watch movies, and try new applications not to get left behind.

This fear of missing out can turn out to be a game changer for your business.

Not many years ago, there was an application which used artificial intelligence to turn your photos into works of art.

The application indeed used a innovating technology, but its success hugely depended on the fear of missing out capitalization strategies used by the company.

It had an inbuilt social sharing feature, used social sharing hashtags to get the followership, influencer marketing to borrow influencers’ followership, and got a lot of (paid and free) press coverage. The application was also initially released only for IOS users which resulted in a capitalization on the scarcity principle and helped in the word of mouth marketing.

Around 69% of the millennials experience the fear of missing out. 60% of them make reactive purchases because of the FoMO. More than half of the people using social media experience FoMO. This makes FoMO an important topic among the marketers.

But how can you draft an effective marketing strategy which capitalizes on the fear of missing out?

Simple, by using the following strategies.

From flash sales to limited stock to limited period offers and deals, scarcity principle always triggers the fear of missing out and attract more viewers/customers/consumers.

According to this principle, humans consider a scarce object more valuable than the one which is in abundance. Scarcity creates a sense of urgency, triggers FoMO, and evoke people to act immediately.

Network effect states that the value of a good or service increases when more people use it. That is, a good or service will attract more customers if its value depend on the number of customers. Social media networks like Facebook, YouTube, Twitter, WhatsApp are few examples.

How does the network effect trigger the fear of missing out?

The more people use that good or service, the more likely you’re to try it or you’ll get a feeling of being left behind.

You’re more likely to get hit by the fear of missing out when you hear the notification pop on your phone than compared to when there isn’t any trigger. Triggers come in many forms like emails, pop-up notifications, phone calls, word of mouth, etc.

A strong focus on trigger based marketing strategies is beneficial if you’re planning to capitalize on FoMO.

“Someone likes you, swipe right to see who” – Tinder ripped me off? from r/Tinder

Exclusivity increases the pride of the exclusive users and make non-exclusive users long for the same benefit. This increases the word of mouth marketing. Many restaurants run special discounts and other offers exclusively for their regular members which attract other customers to become regular and experience and see what they’ve been missing out.

Being explicit about the loss that the user will have to suffer attracts more users than notifying them about the gains.

Did we miss something? Come on! Tell us what you think about our article on fear of missing out in the comments section.

Fear Of Missing Out | Your Guide To FoMO Marketing Strategies