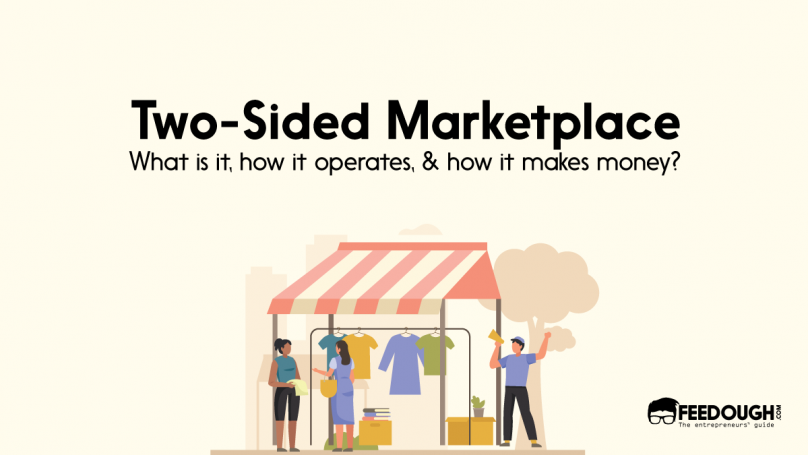 Google, Amazon, Airbnb, Snapchat, Facebook, Netflix, and YouTube have more in common than what usually meets the eye. Apart from being some of the most profitable firms, all these platforms run on a two-sided marketplace model.

In a short period of time, two-sided marketplace companies have become extremely popular and are growing exponentially. According to the Coresight Research Report, these platforms’ revenue is expected to double from $18.6 billion in 2017 to $40.2 billion in 2022.

So, here is a comprehensive guide explaining all there is to know about two-sided marketplaces.

What Is A Two-Sided Market?

A two-sided market is where buyers and sellers interact through an intermediary to fulfil each other’s needs.

Also referred to as a two-way market or a two-sided network, this market is found in several industries providing two participating parties with network benefits. That is, the buyers and sellers both provide value to each other, and both benefit from each other.

What Is A Two-Sided Marketplace?

A two-sided marketplace is an intermediary platform that brings buyers and sellers together to develop and share value through a network.

Precisely, a two-sided marketplace has two kinds of consumers – the buyers and the sellers. This marketplace acts as an intermediary or a platform that connects sellers with customers, both of which benefit from the network.

The advent of the internet has made the two-sided marketplace business model possible. Almost all the top-ranking tech companies make use of this model. Some examples include:

Google is a search engine that targets both consumers and advertisers. Consumers do not pay Google for any search they make. But, Google uses the consumer data to serve the advertisers. Hence, Google provides its services to both the users and the advertisers while connecting them in the process.

Airbnb also has two sets of consumers – travelers looking for rental properties and property owners looking to rent their properties. The brand works as a sharing platform. Although it doesn’t own any properties or houses, it connects the travelers and the hosts.

Uber works on the aggregator business model. It has two user groups – drivers who own cabs and the consumers who require a ride. Uber does not own any cars. It simply aggregates cab drivers and connects them to the customers under its own brand name.

Olx operates on a C2C (consumer to consumer) business model. It has sellers who upload advertisements for the products they want to sell and buyers who have multiple options to choose from. Olx does not own any products. It simply provides a platform to buyers and sellers so that they can interact.

The Business model of Two-sided Marketplace

Two-sided marketplaces operate on a unique business model that separates them from other usual digital businesses. Usually considered to be a platform that connects two parties to hold transactions, the two-sided marketplace could be an aggregator, marketplace, classifieds platform, or a P2P platform.

Every two-sided marketplace has two sets of customers – the sellers who provide offerings and buyers who buy them. The marketplace helps both the consumers to interact and fulfill each other’s needs.

Uber exists because it makes it easy for drivers to get customers and makes it convenient for consumers to book a cab ride.

A two-sided marketplace makes money either from just one set of users or can choose to charge both parties. It usually uses the following four revenue generation strategies to make money.

There is a significant difference between the two business models.

Another difference between both business models is the flow of value and revenue. In a two-sided marketplace, revenue may come in from both consumers and sellers, while in the traditional marketplaces, revenue generally flows from one side to another.

Benefits of a Two-sided Marketplace

The business model of a two-sided marketplace offers many advantages to all three participants: the consumer, the producer, and the platform.

Benefits For The Marketplace Brand

Challenges Of The Two-Sided Business Model

While two-sided marketplaces have a huge potential to grow and connect different consumer groups, they face certain challenges that hinder their performance and growth.

Did we miss something?  Come on! Tell us what you think about our article on two-sided market in the comments section.

Two-Sided Marketplace: What Is It & How It Operates?