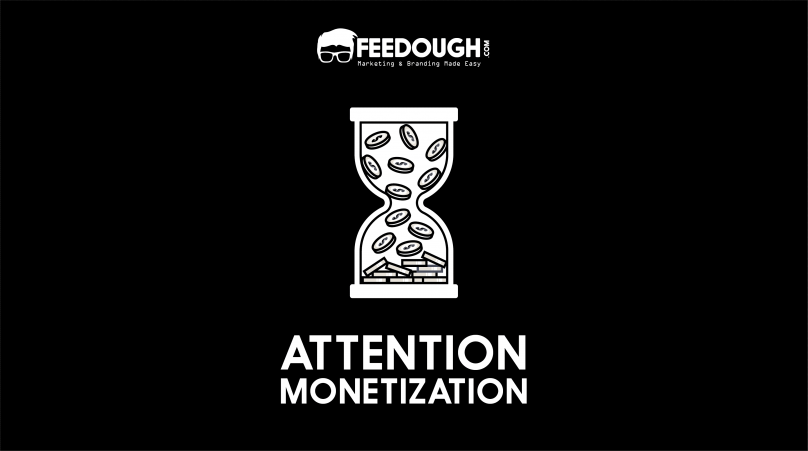 What does it mean to ‘Pay Attention’?

But before answering this question, answer these-

Which of these icons matters to you?

Do you check your phone when you listen to these?

According to a research, you check your phone 2617 times a day. But only a few apps find their way into your daily routine. 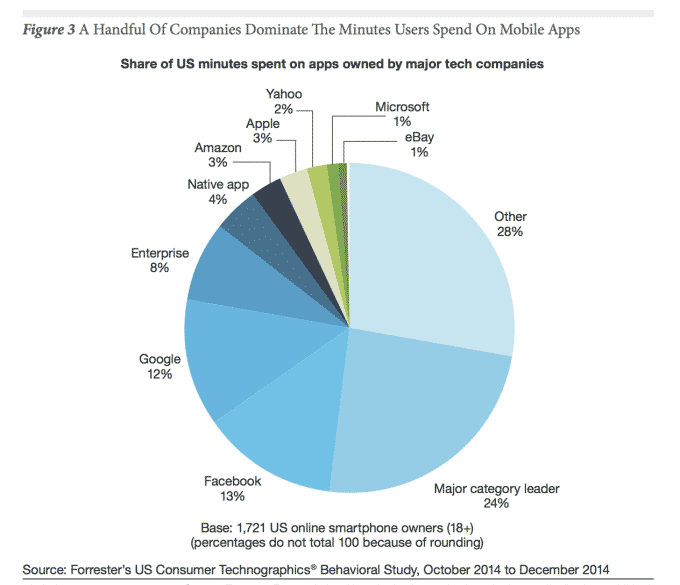 With the availability of such huge amount of information all at once, attention has become one of the most scarce resources you have. No matter how good you are at multitasking you can’t focus on different things simultaneously with all your attention.

This has led to a war among the developers, entrepreneurs, and marketers to win your attention by developing the right product.

Welcome to the attention economy.

What Is The Attention Economy?

We’ve turned a corner toward an economy where an increasing number of workers are no longer involved directly in the production, transportation, and distribution of material goods, but instead, earn their living managing or dealing with information in some form. Most call this an “information economy.” Yet, ours is not truly an information economy. By definition, economics is the study of how a society uses its scarce resources. And information is not scarce – especially on the Net, where it is not only abundant, but overflowing. – Michael Goldhaber

But it’s not as simple as the definition makes it sound like. Attention is also one of the most vulnerable resources to be capitalized on for profits by the businesses.

Do you remember the last advertisement you saw on your TV or over the Internet?

You see around 5000 marketing messages every day from the advertisers who spend millions of dollars on them just to get your attention. Remember the Old Spice ads which had nothing to do with the product? They just wanted your attention by showing what’s relevant to you.

Ever wondered why Netflix releases all of the episodes at once?

“At Netflix, we are competing for our customers’ time, so our competitors include Snapchat, YouTube, sleep, etc.” Reed Hastings #WSJDLive

Netflix vies with Snapchat, YouTube, and sleep for your attention. How many times have their autoplay function made you think “I’ll sleep after one more episode”.

Attention is the cognitive process of selectively concentrating on one piece of perceivable information while ignoring others.

There’s a reason you choose Facebook over others and there’s also a reason why you end up purchasing products kept at the billing counter in a supermarket.

You prefer using Facebook over other social networks because you want to be a part of the network where your friends and family members are and because you’re not bored of Facebook yet. Once you spend a considerable time on Facebook, you move on to another app, say Reddit to see what’s new on the internet.

Companies pay extra money to place their products near/at the billing counter as they act as a parasite which attracts your attention when you feel bored while waiting in the queue.

This is how the attention flow works.

You only have limited hours to devote your attention to things and you prioritize the habits and stimuli which direct your attention. That is, you usually prioritize your existing habits over new experiences until you’re hit by a stimulus to try them. For example, you would have spent your time reading the label of a product if you hadn’t seen the parasite product kept on the counter.

But the point is:

You get hit by stimuli a lot more than you think and the element that stimulates your attention is the trigger.

A trigger is something that makes you do something. It can be external or internal.

Internal triggers include addictions, habits, emotions, etc. which may or may not be in our control.

There are 2 major internal triggers. These include:

Habit is a repeated routine behavior which is usually acquired through repeated actions.

Habits consume most of your attention, consciously and unconsciously. These include eating (or eating while watching TV), sleeping (or sleeping after watching Netflix), exercising (or listening to music while exercising), etc.

Extreme habits give rise to addictions which is the best consumer state for any business.

Emotions can be divided into positive and negative emotions both of which affects the attention of an individual.

You visit Google when you’re curious.

You use Tinder when you feel lonely.

You use Facebook & Instagram because you are curious about what are your friends and family up to.

You send snaps on Snapchat because you want to share your emotions and moments with everyone.

Fear of missing out [FOMO] is one of the biggest attention grabbers. FOMO only lets you pay your attention to that one thing, making you incapable of concentrating on others. The stories feature in Snapchat, Facebook, Instagram, and Whatsapp was introduced to trigger FOMO among the users.

The network effect states that a good or service becomes more valuable when more people use it. Just like water, attention also has cohesive properties which make it attract other people’s attention and eventually create a network effect. 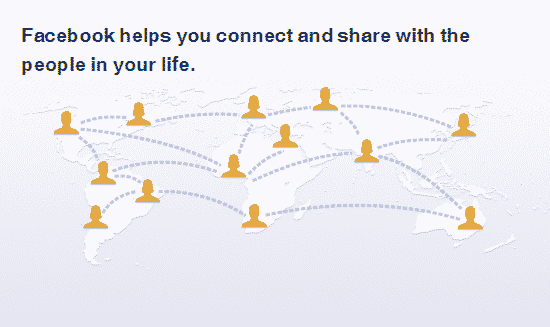 We choose WhatsApp over other IM applications is because a majority of our contacts use it as their default IM service than others.

The fear of loss is more than the hope of gain. Scarcity stimulates the negative emotions and directs your attention to the scarce resource. This is the reason the limited period sales attract you to shop more. 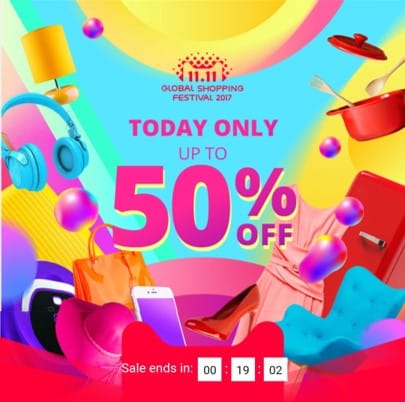 Imagine a scenario of a T-rex fighting with a giant panda near the Statue of Liberty.

You actually imagined it because I’m controlling your attention in this article. Controlling and diverting the attention is easy once you get it. Everyone does it intentionally or unintentionally.

A store gets your attention by displaying an ‘up to 50% off Sale poster” and the salesperson directs it to their most profitable product. I, just like any other blogger, want you to divert your attention to the advertisements on my website.

Brands have started investing in brand integration projects rather than advertisements as it has more attention value.

But what exactly is an attention value?

Just like any other scarce resource in the world, attention also has a certain value. You pay your attention to the things you feel deserve the most.

Even though the attention isn’t a physical resource, it can be measured quantitatively. The amount of time served on a particular resource, memorizing, and repetitive actions are few quantitative measures of attention.

How Is Attention Monetized?

You’ll scratch when there’s an itch.

The attention value is often converted into a monetary value by the people who monetize on it.

Brands spend a lot more to place their product at the eye level in the supermarket just to get your attention. This attention is converted into the direct sale.

Social networking websites work on slot machine economics where they use your chunks of attention and monetize it with your advertisements impressions and clicks.

Netflix releases all the episodes at once just to make you binge watch. They aim for creating a habit which makes you renew your membership every month.

Google continues to use your data to create a better user experience and add more attention-grabbing ads.

Politicians get your attention by speaking about your issues and try to convert it into votes.

Big companies spend millions in attaching an attention value to their product which is termed as a brand.

Companies spend a lot of money in understanding the consumer psychology and the key to their internal triggers. People scratch when there’s an itch. Attention is monetized when you become the cause and the remedy of the itch. It’s monetized when it is rewarded with something that helps heal the itch temporarily.

The attention monetization process can be divided into 4 phases 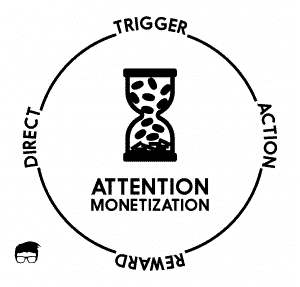 A trigger is the starting point of attention monetization process. A trigger makes the user aware of an itch. It can be external or internal.

It’s how the user scratches the itch. It could be in the form of opening an application, picking up the product to see it, etc.

This is the money making step of the attention monetization process. This is either performed simultaneously with the reward or just after the reward. It could be product recommendation, advertisements, etc.

The attention monetization process is a never-ending process which starts again as soon as the user is rewarded.

Trigger: You want to express your feelings to some people.

Reward: You share your feelings by posting a status.

Direct: You start to scroll the other stories on the newsfeed after posting. Facebook capitalizes on this by including ads in the newsfeed.

Now you want to see the follow-ups (reactions and comments) on your status which makes you open the application again.

Attention is scarce and the market is saturated with the players trying to grab the user’s attention. All you need is the right product hypothesis which makes use of the consumer psychology and uses the right triggers to grab, direct, and monetize the attention.

Did we miss something?  Come on! Tell us what you think about our article on The Attention Monetization in the comments section.