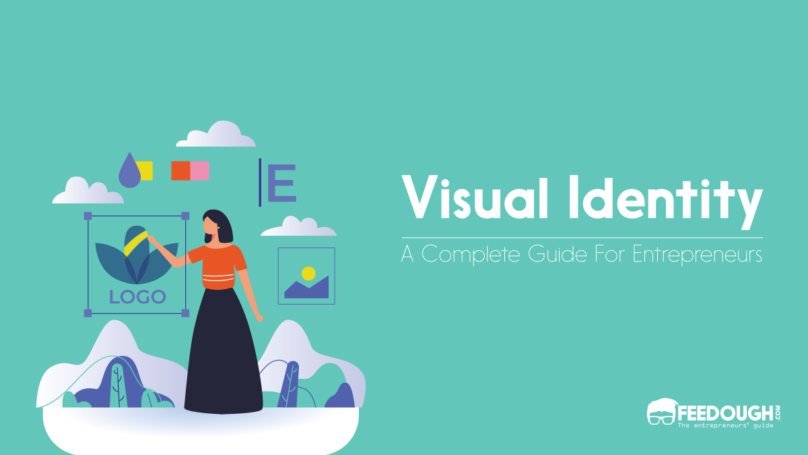 Customers believe what they see. In fact, studies show that over 92.6% of customers put the most importance on visual factors while purchasing a product. This is because humans are innately wired to process visuals 60,000 times faster than text.

And this visual processing power of our brain is what marketers exploit to create a connection with their target audience. This connection is built through a carefully designed process, which we call visual identity.

But before we get into the details of visual identity, let’s first understand what it is and what it entails.

What Is Visual Identity?

Visual identity is the set of unique visible elements and characteristics that visually define and communicate a company’s brand message.

Also commonly known as visual branding, visual identity is an umbrella term that includes all the elements contributing to how a company is perceived visually. This consists of the logo, colour palette, typography, imagery, packaging design, label etc.

In simple words, visual identity is what makes a brand recognisable with just a glance.

For example, when a person sees a yellow ‘M’ on a red background, they instantly think of Mcdonald’s. That’s Mcdonald’s visual branding.

The Importance Of Visual Identity

Visuals are essential for customers to recognise and differentiate a brand effectively. In fact, over 90% of the information transmitted to the brain is visual.

Hence, a strong visual identity is essential for a brand to:

Anything and everything that can be seen, touched, and felt makes up a brand’s visual identity.

Some common visual identity elements are:

Even though often confused to be the same, visual identity and brand identity are not the same.

How To Develop Visual Identity?

Visual identity design is about developing a look for the brand that can be carried across various touchpoints like product packaging, website design, social media posts, marketing collaterals, etc.

While there are many elements to consider while developing a visual identity, here is the process that is generally followed:

Competitor analysis helps in understanding what kind of visual identity designs are already present in the market. This research is essential to ensure that the visuals developed for the brand are unique and stand out from the rest.

Brand personality drives brand identity, which in turn, shapes the brand’s visual identity. Therefore, it is crucial to define how the brand wants to be perceived by its target audience. This will help create visuals that are in sync with the brand’s overall personality.

After the above steps have been completed, it’s time to start creating a moodboard. This board will act as a source of inspiration while developing the brand’s visual identity. It should include images, colours, and fonts that reflect the brand’s desired personality.

Moodboard converts into a visual suite which contains all the necessary elements to be used in the branding of a business. Often, the company has in-house designers who convert this moodboard into a reality. However, if a company does not have an in-house design team, they can always approach branding and design agencies to get the job done.

For example, the company can hire a designer from a freelance marketplace like Fiverr or Upwork, or use a logo maker online to develop its visual identity.

A brand’s visual standards manual is a document that contains guidelines on how to use the visual elements of the brand identity. It includes specifications for all branding materials such as business cards, websites, social media, etc.

Often, brands combine their visual identity guidelines with their overall brand guidelines to create one document that covers both topics.

Here are a few examples of what one might find in a visual standards manual:

Creating a visual identity standards manual is no small feat. It requires significant time and effort to research, develop, and test the various design elements that will become part of the final system. But the benefits of having a well-constructed visual identity system in place are numerous.

Characteristics Of A Good Visual Identity

Even though the company has hundreds of sub-brands, Google’s core visual identity is strong and recognisable. Using a sans-serif font, four primary colours, and the Material You design create a cohesive look that can be applied to various assets.

Take any of the Google apps – Gmail, YouTube, Maps – and one will see the same visual elements used throughout. This consistent use of branding helps users quickly identify Google products and services.

Like Google, Apple also has a strong visual identity applied across all its product lines. The company’s simple colour palette – black, white, and silver – and its use of San Francisco (SF) and New York (NY) as its primary typeface help create a clean and modern look.

When it comes to product design, Apple is known for its minimalism. The company’s products are sleek and polished, with a focus on functionality over form. This approach extends to Apple’s packaging, which is often clean and simple with just a hint of colour.

When it comes to visual identity, Woodland is all about nature. The company’s logo is a simple yet recognisable mark that features a tree in green and brown.

The products give a rugged appeal, and the company’s website is filled with images of its product on people enjoying the great outdoors. The brand even has a lookbook that features lifestyle photos of people wearing Woodland gear.

Did we miss something? Come on! Tell us what you think about our article on visual branding in the comments section.

What Is Visual Identity? [Detailed Guide]