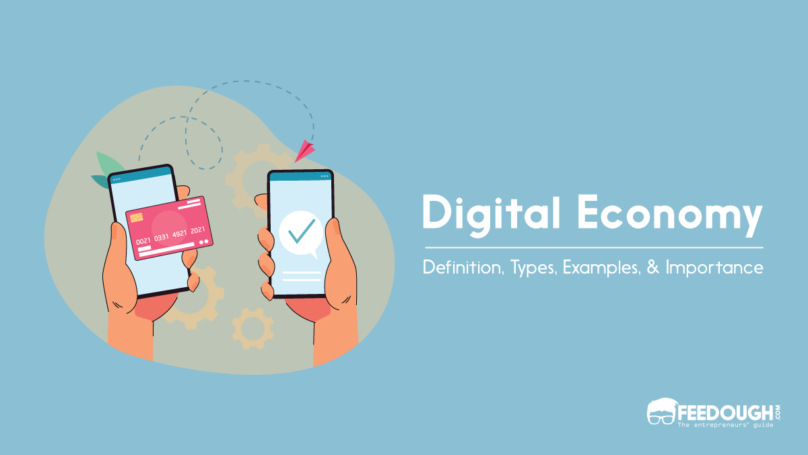 The world has become digital and so has the economy. The digital economy is the result of the transformation of traditional economic activities, products, and services into digital form. It’s based on the internet and supported by electronic means.

The digital transformation of the economy has led to the creation of new business models, new products and services, and new ways of doing business. This digital economy is growing at a rapid pace and is expected to continue to do so in the coming years.

But what is the digital economy? And how does it work?

To know that, one must understand what an economy is. An economy is a system that produces and distributes goods and services in an effort to satisfy the needs of society.

The digital economy is what we get when the traditional methods and activities of an economy are digitised or when new economic activities that are only possible because of the internet and digital technologies emerge.

What Is Digital Economy?

The digital economy is the economy resulting from the digital transformation of traditional economic activities powered by the internet, electronic means, and data.

In simple terms, it’s the economy that exists when the traditional economy capitalises on technological change leading to the exchange of new offerings and the creation of new business models and markets.

This digital transformation is driven by the following:

The digital economy is the result of billions of daily connections between people, businesses, devices, and data. It’s a global, interconnected economy that’s not limited by geographical boundaries.

How Does the Digital Economy Work?

The digital economy works similarly to the traditional economy but with a few key differences.

For instance, in the traditional economy, one might buy a physical product like a book from a brick-and-mortar store in exchange for currency notes. In the digital economy, the same person can purchase an e-book from an online store and pay for it using a digital currency or a cryptoasset like Bitcoin.

Components Of The Digital Economy

Thomas Mesenbourghg, an American statistician and economist, has identified three key components of the digital economy. They are:

However, today’s digital economy is much more complex and goes beyond these three components and includes e-governance, e-banking, and so on.

The digital economy has the following characteristics:

The Importance Of The Digital Economy

The digital economy overcame the limitations of the traditional economy in every aspect possible, be it in production, marketing, or commerce.

Today, it is the single most important driver of innovation, growth, and job creation.

The digital economy has transformed the way businesses operate and has created new opportunities for them. It has also changed the way consumers behave and has given them more power.

The rise of the digital economy is crucial as it:

The digital economy has brought about a fundamental change in the way businesses operate. It has also changed the way consumers behave. Hence, it has become a vital part of the global economy that can no longer be ignored.

Not just the businesses but the government too (like that of India and the USA) has started to realise the importance of the digital economy and is now promoting its advantages.

Advantages Of The Digital Economy

The digitisation of the traditional economy has led to the following advantages:

Even though the digital economy has a number of advantages, it also has some disadvantages which are listed below:

The new digital economy is a lot similar to the traditional economy but there are some key differences between the two which are listed below:

Several businesses have disrupted their respective industries giving rise to the digital transformation of the existing economy. Some of the most notable examples are listed below:

Netflix is a streaming service that offers its users a wide range of TV shows, movies, and documentaries over the internet. The company started out as a DVD rental service but soon switched to streaming when it realised the potential of the internet.

Today, Netflix has over 222 million subscribers and is available in 190 countries. The company has also produced its own content which has been very successful.

Uber is a ride-hailing service that allows its users to book a ride with the tap of a button. The company uses technology to connect riders with drivers. Uber was founded in 2009 and is available in 71 countries and more than 890 cities.

The company disrupted the traditional taxi industry by incorporating technology into the usual taxi booking scenario. Doing so, it created an entirely new business model called the aggregator business model.

Airbnb is an online marketplace that allows people to list, find, and rent vacation homes. The company was founded in 2008 and is available in 220 countries and more than 100,000 cities.

The platform gave rise to the sharing economy and disrupted the traditional hotel industry by just being available online.

Amazon brought marketplaces and commerce to the web and pioneered the concept of e-commerce. The company started as an online bookstore but soon diversified into other areas such as selling electronics, clothing, food, and more.

Amazon is now the world’s largest e-commerce platform with around 600 million monthly active users. The company has also developed its own line of products which are very popular among its users.

Google is one company that gets its roots right in the digital economy. The company started as a search engine but soon expanded into other areas such as advertising, cloud computing, and more.

Google is now the world’s largest internet company with a wide range of products and services. The company has also ventured into hardware with its line of Pixel smartphones.