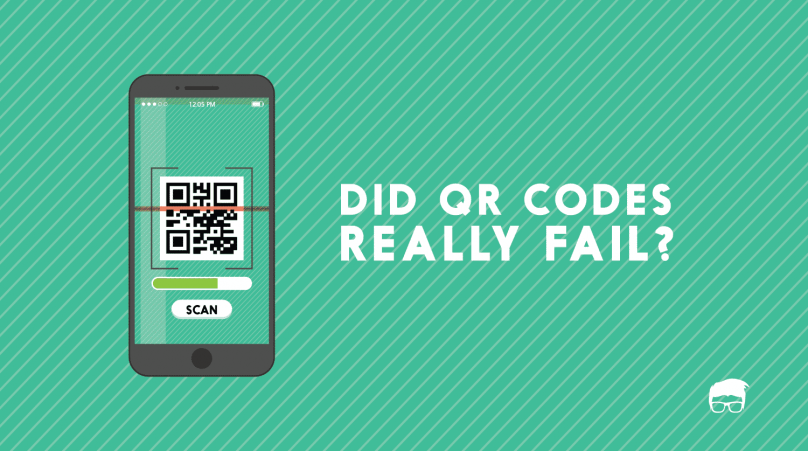 Do you wake up, watch the news and feel that you do not belong to this era? Is the society too primitive for you? Well, you are going to get a very relatable feeling from QR code’s story then.

QR codes have been a hot topic for debate in the marketing world since their introduction to the market. With many experts claiming that QR codes were one of the biggest failures in marketing strategies, QR has seen some tough time in the market.

So the question goes here: Was QR an absolute disaster?

Contents show
1 A Brief About QR Codes
2 Introduction Of QR To The Marketing Industry
2.1 Flaws In The System
3 QR Code Beyond Marketing

A Brief About QR Codes

Introduced in Japan in 1994 by ‘DENSO WAVE’, QR codes were introduced to tag automobiles during manufacturing (Oh and QR code stands for Quick Response code). The base principle of QR codes works on a similar logic to that of a barcode. The black and white pixels represent 1s and 0s of digital logic and upon sequential arrangement make a valid data entry for the system.

You’d ask why would it be popular if it was just a modern bar code. Well, here is the thing: QR is a 2-dimensional upgrade to the standard barcode system. A barcode can handle up to 10 characters but since QR stores the data in rows and columns, the data stored can be increased manifolds. Pretty neat if you ask me.

Introduction Of QR To The Marketing Industry

Soon after QR was introduced, it was sought after as the next big thing in marketing during the smartphone boom. QR codes were used to generate digital advertisement although through printed media. QR codes were encoded with links to videos/ interactive advertisements which were more engaging than the standard motionless content available on posters and banners.

This was seen as the next big thing and marketers flocked to the idea of trying their hand on QR marketing strategies. This was the boom moment; people already thought QR would take away their orthodox marketing strategies away. Marketers were perplexed, people were excited. I remember when they were introduced I was pretty pumped up, were you?

Flaws In The System

Initially, the target audience was set for the experimental masses and because of the curiosity among the common public, QR marketing strategy seemed like a success. However, most marketers didn’t weigh in the market response that was to follow. The two driving questions from people who were subjected to QR marketing were:

Look: When QR codes were introduced, not a lot of cellphones came in loaded with QR Scanners thus most QR advertisements never even reached the target audience. When phones did start rolling out with QR Scanners, QR codes were deemed obsolete and were already shown the exit. Thus, a vast majority of the target audience was lost due to this reason. You probably faced the same issue, didn’t you?

The second major reason was that most people exposed to QR were very unenthusiastic about it. Watching a QR advertisement essentially meant getting your cellphone out, opening the QR Scanner application, scanning the code properly and waiting for the internet to respond (How tedious is that).

Now:  To a regular passerby who hardly had time, the essential priming that images do wasn’t possible here. To watch an advertisement, each individual had to put in an effort as contrary to the standard procedure of putting in efforts to avoid advertisements. Also if an individual was really interested in knowing about a poster or advertisement he saw, he could just Google the keywords and Google’s algorithms would take him show him the exact link without the effort of scanning the QR code.

What if I told you that Java had met a similar fate when it started out? (Yes, you read correctly. The big and mighty Java we now know) It was intended for smart television monitors but the monitors during Java’s incubation period were way too primitive to implement Java (Talk about existing ahead of time). Java was thrown out but it came back up stronger than ever. Was QR really having an untimely death?

Bottom line: QR codes were rejected by creative marketing heads but were widely accepted by instant messaging applications. Applications like BBM, Snapchat, and Messenger took them up and introduced them as a way to quick connect. ‘Snapcodes’ and ‘BBM me’ became a common lingo. This gave users the advantage of connecting with people without giving away their personal information.

Now: after the boom of e-wallets, quick payment was introduced which ran on QR codes. Buyers could easily pay money by scanning the QR code of the vendor. This resulted in an increased sense of comfort to use QR codes. With this, QR is now synonymous as quick connection tool without manual input of data. It may come as a surprise to you but China, an obvious giant in the mobile payments sector has majority of its transactions with the help of QR connect and the numbers are staggering. It is projected that the transaction volume would reach RMB 295.99 trillion ($47 trillion) in 2019. Mobile wallets like PayTM in India are showing great promise and vendor to seller transaction usually takes place through QR codes. Recently, Venmo has introduced QR codes to share and split bills and this would take transaction ease to the next level in the US.

QR codes have even found an important place in the cryptoassets industry where businesses and users use QR codes to securely transfer cryptoassets among wallets.

Thus, though QR faced defeat in the marketing sector and didn’t work out the way it was expected to be, it still is one of the most important tools used today and it cannot be counted as an utter failure. It is a huge upgrade to the previous technology and thus should not be counted as a failure.

What do you think about QR codes? Is it a useless piece of tech you could do well without? Or is it something that is really needed? Let us know in the comments below.